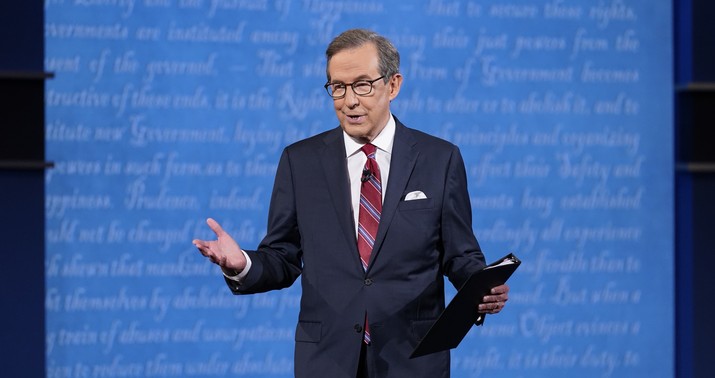 My half-hearted hot take about this is that he’s secretly thrilled with how it went. He clearly doesn’t think much of Trump. If last night’s sh*tshow contributes to a Trump defeat in November, Wallace can console himself with the fact that he played a bit part in it.

But no, I don’t really believe he’s thrilled. He went into the debate acclaimed as a solid choice for moderator and came out having completely lost control, the presiding figure at one of the tawdriest spectacles in the history of presidential politics. Drudge’s headline for the better part of the last 24 hours has been “Night Exposes Nation In Decline,” which is perfectly apt. It was so embarrassing that the debate commission is scrambling to change the rules today to avert a reprise next time.

To top it off, Wallace is being scapegoated by some in righty media, including employees of his own network, for Trump’s performance.

I think he’s staring in the mirror today, imagining people reminiscing about this 25 years later. “Remember that Trump/Biden debate that Chris Wallace hosted? That’s when it really hit me for the first time that America’s civic culture is a sick joke and that our decline was irreversible.”

“I’ve read some of the reviews, I know people think, Well, gee, I didn’t jump in soon enough,” Mr. Wallace said, his voice betraying some hoarseness from the previous night’s proceedings. “I guess I didn’t realize — and there was no way you could, hindsight being 20/20 — that this was going to be the president’s strategy, not just for the beginning of the debate but the entire debate.”

Recalling his thoughts as he sat onstage, with tens of millions of Americans watching live, Mr. Wallace said: “I’m a pro. I’ve never been through anything like this.”…

[A]s the president gave no sign of backing off, Mr. Wallace said, he grew more alarmed. “If I didn’t try to seize control of the debate — which I don’t know that I ever really did — then it was going to just go completely off the tracks,” he said…

Asked what he was feeling when he called the debate to a temporary halt — instructing the candidates that “the country would be better served if we allowed both people to speak with fewer interruptions” — Mr. Wallace said, “The answer to that question is easy: Desperation.”

Interestingly, he’s not a fan of the plan to give moderators the power to cut the candidates’ mics. For one thing, supporters will inevitably cry foul play when their guy is prevented from interrupting their opponent in the middle of telling a lie. For another, it wouldn’t stop the candidates from disrupting each other or the debate. They can still hear each other onstage, and if they’re loud enough with their interruptions the audience might be able to hear them through the other candidate’s live mic. Trump being Trump, he might just start shouting his criticisms if his mic is turned off.

All of which is to say that there’s no technological fix for our collective civic disaster. There was nothing Wallace could have done to stop the interruptions short of admonishing the candidates impotently. He even tried to placate Trump at point as one might a child by reassuring him after an interruption that he’d like the next debate question better. Trump behaved the way he did because he thought it would appeal to a meaningful part of the U.S. electorate. Which is a brutal, depressing — but maybe not inaccurate — commentary on the population.

As I write this at 6 p.m. ET, I haven’t heard or seen any account of Wallace appearing on Fox News today to discuss the debate. Did I miss something or has he really been AWOL on his own network? If so, why? Was that a Wallace decision, not wanting to be confronted by Trump-friendly hosts about how he was too hard on Trump, or was that a network decision in trying to avoid that dynamic? Fox execs did issue a statement of support for him this afternoon…

Fox News CEO Suzanne Scott & President Jay Wallace send out note to staff calling debate a "unique situation" and hailing Chris Wallace: "No moderator could have managed a debate of that magnitude better than Chris"

…but I wonder if that’s aimed primarily at Fox’s primetime hosts. Tucker, Hannity, and Ingraham are the three Trumpiest anchors on the network, people who might be naturally inclined to absolve Trump for his performance during their programs tonight by blaming Wallace instead. Especially since Trump himself took to amplifying criticisms of Wallace this morning:

Chris had a tough night. Two on one was not surprising, but fun. Many important points made, like throwing Bernie, AOC PLUS 3, and the rest, to the wolves! Radical Left is dumping Sleepy Joe. Zero Democrat enthusiasm, WEAK Leadership! https://t.co/BGbPVHau3M

Try getting a new Anchor and a smarter Democrat candidate! https://t.co/B9heSVV1OJ

Trump is RTing a bunch of people whining about Chris Wallace? Why? pic.twitter.com/WF9MKkTYRf

Maybe Fox management is giving the network’s A-listers a little nudge to proceed with caution when criticizing a member of the team.

I’ll leave you with this, a shot at Wallace taken this afternoon by Jake Tapper after Trump’s spokesman tried to bulldoze him during an interview. When you’re anchoring your own show, you have the luxury of cutting off a guest at any moment. When you’re moderating a debate and one of the participants is the president, you’re stuck. I’d be eager to hear media pros explain what Wallace should have done. Harangue Trump, as if that would have stopped him? End the debate early? C’mon.

Jake Tapper to Tim Murtaugh: "Okay, you know what, I'm not Chris Wallace. Thank you, Tim, appreciate it. Thank you so much"

[cuts Murtaugh off the air] pic.twitter.com/ZBoSDNyGEO