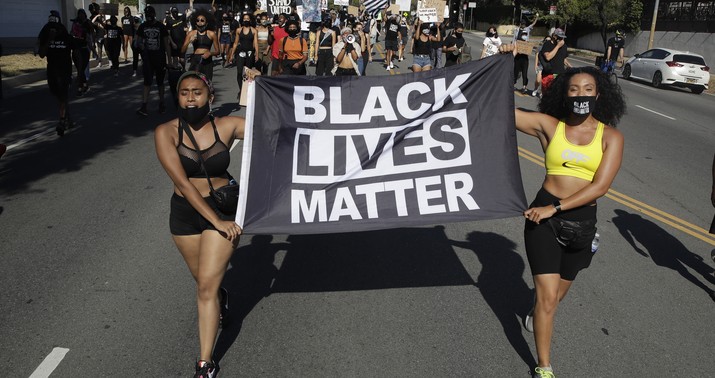 This data isn’t new but it’s striking, and features in a FiveThirtyEight piece examining the black vote this year in more granular detail. It’s an ironic counterpoint to the Ilhan Omar post earlier too, as it suggests that Trump’s insinuations about people who don’t belong to “our country” aren’t hurting him with younger black voters, at least.

But that’s the glass-half-full view. The glass-half-empty view is this: How many more black voters, young and old, might he attract if not for off-putting garbage like that?

Trump’s going to get clobbered among Latinos and, especially, black voters this year but the degree to which he’s clobbered matters a lot. If he pulls another election upset, his performance with black and Latino men in particular is apt to be a key reason. There’s a gender gap within those groups, just as there is among whites. But there’s an *age* gap too, one that tends to be overlooked in too-broad references to “the black vote” or “the Latino vote.” Younger black voters think very differently than older ones do about politics, notes FiveThirtyEight. And that may have major implications for American politics in a few years.

You see my point about Omar in the first line there. If 79 percent of a group believes you’re a racist, your opportunities to make inroads into that group are highly limited.

I remember writing in May about how Biden was underperforming with young black voters even at the time. According to a Politico piece published this week, it’s still happening:

Terrance Woodbury, a Democratic pollster with HIT Strategies, thinks Trump’s tactic on social media is having an effect. In 2016, Trump won 8 percent of Black voters under the age of 35; he’s now at 16 percent with that demographic, Woodbury said.

During recent focus groups with Black voters in Wisconsin, Georgia and Florida, Woodbury asked participants what Trump has done to make their life better. When Trump’s messaging about pre-Covid-19 Black employment and investments in historically black colleges came up, young men could “recite it verbatim.”

There are two theories of why Biden’s and the party’s grip on younger black voters is weakening. One is that some members of that group simply lean much further left than the party’s mainstream does. They’re as unhappy with the Democratic establishment as any other progressive is. I’ve posted this graph before but it’s worth having another look:

Biden’s suffering on the left with younger African-Americans. But as the FiveThirtyEight data shows, he’s also suffering a bit on the right. A smart friend emailed me after the post in May to say that he’s seen other data showing young black voters warming up — a little — to the GOP. His theory is that it’s largely a product of younger generations having been born after the civil rights movement. If you’re old enough to remember the fight to end Jim Crow, chances are you regard liberals as your allies and conservatives/reactionaries as your enemies. (A lot of those reactionaries were Democrats at the time but the south shifted reliably red decades ago.) If you’re not old enough to remember then you’re more willing to hear out and sympathize with the conservative point of view. Especially, perhaps, if that point of view comes from a character like Trump who’s not ideologically opposed to bigger government the way Republican nominees before him were.

So maybe what we’re seeing here is the earliest inklings of a realignment. The days of Democrats winning 88 percent of the black vote or whatever might be ending.

Which is not to say that the days of Democrats winning elections are ending too. Look no further than the polls right now, as Biden underperforms Hillary Clinton with blacks and Latinos and yet leads Trump by wider, more consistent margins than Hillary did for most of the 2016 campaign. Biden’s secret is that he’s peeling off parts of Trump’s bloc of white voters, more than compensating for his losses among minorities. Democrats are hoping that the suburban shift towards the left in 2018 will prove durable this year even though that will put pressure on the party to inch away from Bernie/AOC-style populism going forward. Whites with college degrees, a huge chunk of suburbia, are becoming a bigger part of the electorate too while whites without degrees, Trump’s base, are growing smaller. Dems are cultivating an expanding segment of voters, Trump is going all-in on a declining one — which may or may not be offset in years to come with a growing GOP share of nonwhite voters.

Exit question: FiveThirtyEight notes that among older black voters Kamala Harris has a 77/10 favorable rating whereas among younger black voters her rating is 28/44(!!!). Is that because, as noted, younger blacks lean very left? Bernie fans naturally think Harris is a poseur for having unconvincingly tried to turn herself into a Medicare for All supporter during the primary. Or is it because younger black voters, amid a burst of national activism over police brutality, might be more attuned to Harris’s record on criminal justice as California AG and don’t like what they see?