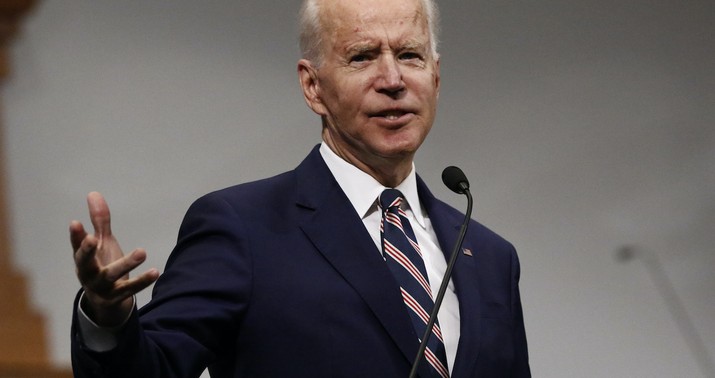 I can only assume this means they ain’t really black.

This WaPo piece works as sequel to my post last night about why Kamala Harris is the likely favorite for VP. Despite all the hype in the primaries about Biden’s special bond with black voters, and despite the fact that black Democrats rescued his crumbling candidacy in South Carolina, one of his few glaring trouble spots in head-to-head polling with Trump is his relatively weak performance among African-Americans. He’s improved on Hillary Clinton’s 2016 numbers with other groups, most notably among senior citizens, but not here. Fox News’s poll a few days ago had him up eight points nationally on Trump but with a note of caution:

Trump leads by 7 points among men and by 30 among rural whites. He won both groups by larger margins in 2016 (11 and 37 points respectively).

It’s not hurting him right now because he’s making up the difference with other demographics, as Fox notes. Women, blue-collar whites, and seniors are all more pro-Biden than they were pro-Clinton, which may be enough. But it’s a risk. If Trump figures out a way this summer to claw back votes among the white working class and the 65+ group, Biden’s going to need black voters to rescue him again. Right now the numbers just aren’t there.

Two researchers writing in WaPo today looked at data from the Democracy Fund + UCLA Nationscape project from early April through mid-May and found the same thing Fox did. (Note that the data was compiled before his “you ain’t black” comment, in case you’re wondering if that remark influenced these results.) Biden’s winning big with black voters, of course, but not as big as Clinton and certainly not as big as Obama. In a tight election, that could be the difference. Here’s one of the more amazing graphs I’ve seen this year:

It’s not just that there’s an age gap among older and younger black voters in their support for Biden. It’s that there’s an age gap in their support for *Trump.* Nearly one in three African-Americans between the ages of 30 and 44 rates Trump at least somewhat favorably compared to just nine percent among those 65 and over. Overall, Biden leads Trump 79/11 among black voters; four years ago at this time, Hillary led 80/6. Not a huge difference, right, but remember that Michigan was decided by 11,000 votes out of 4.5 million cast. When you drill down among younger black voters, Biden’s weakness becomes even more apparent: “Only 68 percent of black registered voters ages 18 to 29 say they intend to vote for Biden; 13 percent say they will vote for Trump, and 18 percent say they don’t know. By contrast, in 2016, 85 percent of young black voters reported voting for Clinton.”

It would be absolutely wild if Trump wins a nailbiter in November because just enough younger African-Americans preferred a Republican who specializes in white identity politics over a Democrat who served as VP to the first black president.

The momentous question for Team Biden is figuring out why younger black voters are so lukewarm about him. Is it (mainly) because of his record on matters of racial justice, like the 1994 crime bill, or is it (mainly) because they prefer more left-wing economic policies? The answer may influence his choice of VP. If he concludes that they find him insufficiently progressive on race, that may lead him to opt for Kamala Harris or Stacey Abrams. If he concludes that it’s mostly economics, that may point him towards Elizabeth Warren — although if you read my post last night, you saw the Morning Consult data that suggests Warren could help him with both lefties *and* African-Americans more than Harris could. Black voters say they’d be more likely rather than less likely to vote for a Biden/Warren ticket by a margin of 24 points; their margin for a Biden/Harris ticket was 19 points by comparison.

Dem pollster Stan Greenberg has compiled his own data on the optimal VP choice and says there’s no question it’s Warren:

Biden’s biggest problem, Greenberg said, is that the Democratic Party has not unified behind him. In fact, Biden is now behind where Clinton was with Bernie Sanders voters in 2016, with more than 20 percent of the democratic socialist’s backers saying they would not vote for him, even as 87 percent of them pledge to vote for a Democrat for Congress. At a similar point in the 2016 cycle, roughly 15 percent of Sanders voters said they wouldn’t vote for Hillary Cllinton and Greenberg’s own polling through Democracy Corps around Election Day found the same…

In measuring several different messages of various candidates without their names attached, Greenberg told Biden’s team that Warren’s message about a “rigged” system was “dominant” among the groups Biden needs, such as millennials who may feel disillusioned by the tumult of recent decades…

In his presentation, which was titled “The obvious solution,” Greenberg wrote, “The biggest threat to Democrats in 2020 is the lack of support and disengagement of millennials and the fragmentation of non-Biden primary voters.”

Because black voters of all ages and demographics prefer Democrats overwhelmingly to Republicans, analysts are forever tempted to view their political choices through the prism of race. But black millennials are, after all, millennials, and millennials of all races tend to be more left-wing. Socialist-lite Warren may be more appealing to them than Harris on the merits. Feast your eyes on this, posted by Morning Consult the day before the South Carolina primary in February:

Asked at the time whom they preferred among the Democratic candidates, 46 percent of black voters under the age of 45 said Bernie Sanders compared to just 15 percent who said Biden. Mike Bloomberg actually finished slightly ahead of Biden at 17 percent. How this squares with the data up above showing younger black voters better disposed to Trump than their elders are is unclear, but it does raise the possibility that Warren as VP would kill two birds with one stone for Sleepy Joe. It could help solve his problem with progressives *and* with younger black voters who are lukewarm about him right now. While, of course, potentially creating a huge new problem for him among suburbanites who don’t want socialist-lite a heartbeat away from the presidency.

Exit question: Are Dems willing to sacrifice a Senate seat to have Warren as VP? Massachusetts’s governor, Charlie Baker, is a Republican and he’d get to appoint her replacement. That could be the difference between a 50/50 Senate with VP Warren as the tiebreaker and a 51/49 GOP advantage. Although maybe Baker wouldn’t have the stones to do that. His mostly Democratic constituents would hold a grudge if he singlehandedly yanked a Senate majority out of Biden’s and Schumer’s hands.