Report: Trump’s HHS spokesman warns in video of CDC “sedition,” shadows on his ceiling, possible plot to kill him 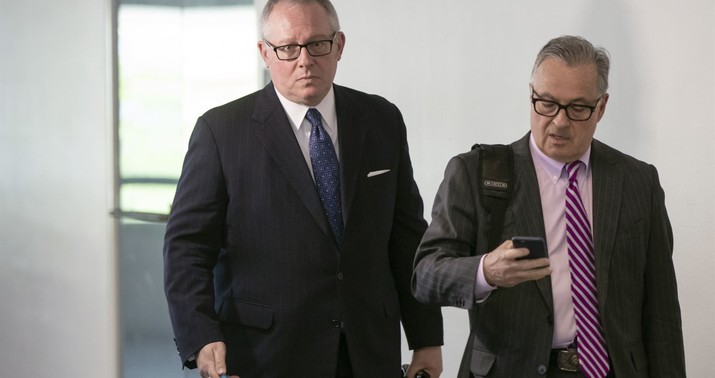 I hope the quotes gathered here by the Times are accurate and *fair,* not ripped from some context that might make them seem more sensible. Because if not, they’ve done Michael Caputo a grave disservice by making him sound nuttier than squirrel turds.

Caputo, a Trump campaign veteran, is the chief spokesman for HHS. He was installed in that role in April, but even from the start his job had less to do with his own communications than policing the communications of others. “The move is designed to assert more White House control over Health and Human Services Secretary Alex Azar, who officials believe has been behind recent critical reports about President Donald Trump’s handling of the coronavirus pandemic,” sources told Politico at the time, noting that Caputo is known as an “intense Trump loyalist.” To all appearances, the president was installing a devoted crony to ride herd on the CDC’s COVID science six months out from an election that may well end up turning on perceptions about how well Trump has handled the pandemic.

Ever since, reports have been trickling into the media about Caputo and his aides meddling with the CDC to make sure that the agency’s message on the virus doesn’t conflict too strongly with the president’s. Go figure.

According to the Times, Caputo held a Facebook Live event yesterday for his followers, something he does regularly. The message this time was also regular in some ways — noisy complaints about a “resistance unit” at the CDC supposedly engaged in “sedition,” which counts as standard fare by Trump administration standards — but less regular in others. Again, we’re relying on the paper for context here, but if this is accurate it sounds like Caputo is having some sort of crisis:

“You understand that they’re going to have to kill me, and unfortunately, I think that’s where this is going,” Mr. Caputo, a Trump loyalist installed by the White House in April, told followers in a video he hosted live on his personal Facebook page. Mr. Caputo has 5,000 Facebook friends, and the video has been viewed more than 850 times. It has been shared by 44 followers.

“I don’t like being alone in Washington,” he said, describing “shadows on the ceiling in my apartment, there alone, shadows are so long.” He then ran through a series of conspiracy theories, culminating in a prediction that Mr. Trump will win re-election but his Democratic opponent, Joseph R. Biden Jr., will refuse to concede…

“And when Donald Trump refuses to stand down at the inauguration, the shooting will begin,” he said. “The drills that you’ve seen are nothing.” He added: “If you carry guns, buy ammunition, ladies and gentlemen, because it’s going to be hard to get.”

In a normal administration, having a top spokesman talk like that would be grounds for a mental-health intervention behind the scenes. As it is, Trump’s probably reading those quotes and thinking Caputo might make a fine AG after Bill Barr leaves.

That wasn’t the craziest part either:

Mr. Caputo suggested, also without evidence, that the August killing of a Trump supporter in Portland, Ore., by an avowed supporter of the left-wing collective known as antifa was part of broader left-wing plot to target the administration’s supporters.

“Remember the Trump supporter who was shot and killed?” he said. “That was a drill.”

The man suspected of the shooting, Michael Forest Reinoehl, was later shot dead by officers from a federally led fugitive task force in Washington State. He “went down fighting,” Mr. Caputo said. “Why? Because he couldn’t say what he had inside him.” He then spoke of “squads being trained all over this country” — a conspiracy theory unsupported by evidence.

This is the top spokesman for the U.S. government’s health bureaucracy, the person in whom Trump has reposed the trust of the American people to accurately relay information about a once-in-a-lifetime pandemic.

And you know what? He doesn’t sound all that different from the president himself. Remember this?

The deep state, or whoever, over at the FDA is making it very difficult for drug companies to get people in order to test the vaccines and therapeutics. Obviously, they are hoping to delay the answer until after November 3rd. Must focus on speed, and saving lives! @SteveFDA

Politico and the NYT have each published stories over the past few days about the lengths to which Caputo and his science advisor, Paul Alexander, have gone to interfere with CDC reporting on COVID-19. Why does a spokesman have a “science advisor” in the first place, you ask? Good question. Caputo himself acknowledged to reporters that it’s unusual, but I think the answer is straightforward. It would be hard for him, as a layman, to justify strongarming CDC scientists on their own findings in order to make those findings more Trump-friendly. For that, he needed a scientist who would take Trump’s side on things; that way, the disputes with the CDC would allegedly be arguments over “science,” not politics. (Alexander seems to play a role for Caputo similar to the role Scott Atlas plays for Trump inside the White House.) Alexander allegedly has accused the CDC in emails of writing “hit pieces on the administration” and took special exception to the report published last month about an outbreak among children at a summer camp, as that complicated the president’s message that it was time for schools to reopen.

Which sounds a lot like an attempt to bottle up information of great import to parents and kids about the risks they face this fall. But then, “downplaying” the virus has always been Trump’s strategy, no?

Alexander reportedly also warned NIH staff on August 27 that there’s no reason to test asymptomatic people who’ve been in close contact with COVID patients, an argument hotly disputed by virologists but which somehow showed up in the CDC’s own official guidance a few weeks ago. Did the agency cave to Alexander and Caputo in tweaking its own protocols for political purposes? Hmmm. Either way, “One C.D.C. scientist working on the coronavirus response said in an interview on Saturday that some career officials at the agency were so fed up with political meddling that they were considering resigning,” according to the Times. That source claimed that “political officials” have even canceled interviews scheduled with CDC officials to stop them from discussing science that might contradict Trump’s sanguine view of the pandemic.

It’s a disaster either way. If they resign, any lingering public trust in the administration’s handling of the virus will shatter, potentially badly damaging the efforts to get Americans vaccinated next year. (The public’s willingness to get the vaccine has already fallen sharply.) If they don’t resign, God only knows what sort of redactions and rewritings of CDC findings will happen over the next seven weeks to suit Trump’s electoral interests, potentially putting Americans at risk. Having a political hack like Caputo prevent doctors from telling hard truths lest they compromise the leader’s hold on power is pure banana-republic stuff but this is the country we’ve created for ourselves with our electoral choices, so it’s what we deserve. The least Trump could do at this point is replace Caputo with a lackey who doesn’t think he’s being targeted for assassination, but Trump being Trump, he’ll probably be cheered by Caputo’s comments. They certainly do show loyalty!