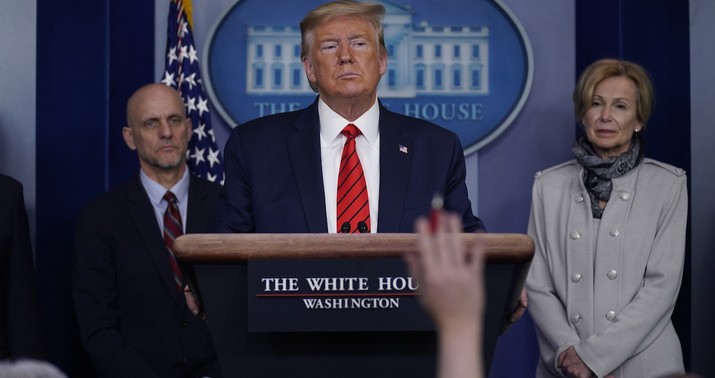 Surprisingly, many hours after Kayleigh McEnany teased the news, the specifics still haven’t leaked. As of 12:30 p.m. ET on Sunday it’s a mystery — although we can take an educated guess.

News conference with President @realDonaldTrump at 6 pm tomorrow concerning a major therapeutic breakthrough on the China Virus. Secretary Azar and Dr. Hahn will be in attendance.

It’s probably an announcement that the FDA has issued emergency-use authorization for convalescent plasma. Trump’s been talking about the potential for plasma for weeks in his daily briefings. Scientists have been using it for ages to treat other diseases. Find someone who’s had the disease, draw their blood, isolate the plasma component, analyze it to make sure that it has the correct antibodies, and voila, you have a product that can quickly boost the immune response in a person who’s just been infected.

In theory. The catch with plasma is that no one’s completed a randomized clinical trial yet assessing whether it works against COVID-19. Many thousands of Americans have already received it through a Mayo Clinic program sponsored by the feds, but that’s not a clinical trial. Everyone who enrolls in that program gets plasma, not a placebo, which means there’s no way to compare outcomes between patients who’ve received the treatment and those who haven’t.

Why America has been so slow to undertake those clinical trials given the potential of plasma is a complicated question. Partly it’s because no one sick with COVID wants to run the risk of receiving a placebo. Partly it’s because we’ve been too busy running trials on other therapeutic possibilities, like, er, hydroxychloroquine. The FDA has reportedly been considering emergency-use authorization for plasma for several weeks, but has held off. If in fact the news tonight is that EUA has been granted, without any trials having been completed, there’ll be heat for Trump and FDA chief Stephen Hahn from some doctors tomorrow. A passage from a Times story published on August 4:

The F.D.A. is preparing an emergency authorization to use the treatment, according to scientists who have been briefed on the plans. The policy would ease the clerical burden on hospitals to get clearance for transfusions, further hampering clinical trials, researchers said. An F.D.A. spokeswoman declined to comment on whether such an authorization was in the works.

The move would mean the F.D.A. is “yielding to political pressure,” said Dr. Luciana Borio, who oversaw public health preparedness for the National Security Council under Mr. Trump and who was acting chief scientist at the F.D.A. under President Barack Obama.

A trial for plasma being conducted at Johns Hopkins is aiming to produce preliminary results sometime between mid-September and mid-October. “The science is really important, because we’ve taken some wrong turns in recent months,” said one doctor at Baylor to NBC of the now-rescinded EUA for hydroxychloroquine, which has never shown efficacy against COVID in a clinical trial. The counterargument to that is that we can’t afford to wait, as we might see another 50,000 deaths by the time Johns Hopkins has data. Since plasma appears to be safe — again, thousands have gotten it through the Mayo Clinic — why not roll it out now?

Trump made that point yesterday morning in his own Trumpy way, farting out a little conspiratorial nonsense to try to explain why the FDA might be reluctant to approve a treatment that hasn’t passed a clinical trial.

The deep state, or whoever, over at the FDA is making it very difficult for drug companies to get people in order to test the vaccines and therapeutics. Obviously, they are hoping to delay the answer until after November 3rd. Must focus on speed, and saving lives! @SteveFDA

Pelosi took him to task for that in a presser yesterday afternoon:

A president demagoguing his own FDA as subversive political hacks to get them to approve a treatment they have doubts about is gross even by the standards of this era, especially in light of the timing. The Republican convention starts tomorrow; Trump doubtless wants to be able to tout some sort of progress on COVID to voters who are tuning in. (He may also be envious of Russia’s announcement that they’ve approved a vaccine without doing more than cursory testing. Why can’t America do that?) So he bullied his top scientist by accusing him of being a deep-state provocateur if he doesn’t move faster on approving therapeutics.

And it worked. Hahn’s going to look like a chump standing up there today having greenlit plasma just 24 hours after Trump’s tweet. Anyone worried that POTUS might pressure the FDA into approving a vaccine that’s not ready for primetime before November 3, in order to help his election chances, has to feel partially vindicated since it seems that’s what’s happened with therapeutics and the convention. But whatever — if plasma works to help patients, both Trump and Hahn will come out smelling like roses. If it doesn’t work, and it turns out Hahn pushed this out despite misgivings, his reputation as a scientist rather than a political apparatchik might never recover.

I’ll leave you with two clips, one of Mark Meadows defending Trump’s impulse to pressure the FDA and one of Scott Gottlieb, the agency’s former commissioner, insisting that they’d never slow-walk a therapeutic, especially for political reasons.

.@GStephanopoulos: So Trump does believes there are those in the FDA who are trying to delay testing vaccines and therapeutics for political purposes?

Mark Meadows: “I believe that there are a number of people that do not see the same sense of urgency.” https://t.co/AEHLs1K3Ot pic.twitter.com/71CYGCV7ol

WATCH: @ScottGottliebMD, former head of @US_FDA , weighs in after both @realDonaldTrump and @MarkMeadows suggested that the independent agency is slow-walking testing of vaccines and therapeutics to combat #COVID19 pic.twitter.com/ql7U9fnT9N