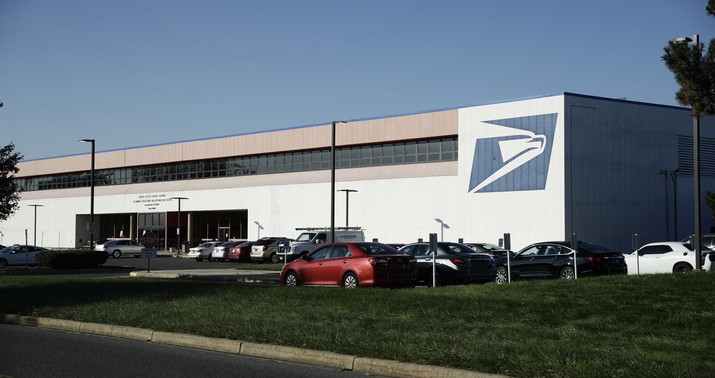 Hopefully this won’t end up being another case of paranoia-fueled misinformation about what’s going on at the Postal Service. In the last week alone there have been freakouts about mailboxes being removed from American streets, mailboxes turning up at a mysterious processing center, mailboxes being locked so that they can’t be used, and mail-sorting machines being removed from USPS facilities. Every one of those cases had a rational explanation. Some mailboxes were removed because they were redundant, which isn’t unusual for the Postal Service. The mysterious processing center turned out to be where old mailboxes are sent to be refurbished. The locks on certain mailboxes in Burbank have been there for years, and those boxes still have slots for mail to be deposited. And it’s not unheard of for the USPS to move mail-sorting machines around to improve efficiency, as some facilities may have more of a load during a given period than others.

Lotta fear out there right now, fueled on the one hand by Democrats who want to leverage that fear for electoral gain and on the other hand by Trump himself, who happily admitted to reporters last week that he opposes funding for the post office in the next stimulus bill because he opposes universal mail voting.

Here’s a question, though. Are mail-sorting machines simply being moved around and/or decommissioned and being placed into storage until they’re needed? Or are they actually being *destroyed*? ABC received photos today of machines inside a USPS facility wrapped in yellow “caution” tape and partially disassembled. Is that suspicious?

Asked about the removal, Ernie Swanson, a spokesperson in the Oregon office of the USPS, said, “Mail processing equipment is replaced as it becomes out-of-date. It is replaced by state-of-the-art new machines.”…

One formal postal service leader said that announcement raised more questions than it answers, including for the equipment in facilities like the one in Portland that have already been taken offline.

“[The statement] goes on to say that mail processing equipment will remain as it is, will remain where they are. … Well, if you’ve already dismantled some of that equipment or removed it, the fact that it’s remaining as it is doesn’t mean that you’re going to reassemble that equipment, or return it to the extend that it’s been removed,” Ronald Stroman, the former Deputy Postmaster General until June, said on Tuesday.

ABC asked Swanson if the Portland facility will in fact receive a new machine to replace the disassembled one. He replied by sending a copy of Postmaster General Louis DeJoy’s statement yesterday announcing that cost-cutting measures would be frozen until after the election. It would be … strange if the USPS had intended to splurge on new machines at a moment when the agency is looking for ways to tighten its belt.

But it’s also strange that they’d incur the expense of disassembling the machines instead of just letting them sit idle. Are they harvesting redundant machines for parts right now, maybe?

Heather Walker is a reporter for WOOD, the NBC affiliate in Grand Rapids, Michigan. She’s hearing about machines being dismantled too, and they’re not being completely parted out. Some components are allegedly ending up in the trash.

.@USPS GR Patterson location has pieces of the mail sorting machines out in the parking lot. @WOODTV pic.twitter.com/OuugjhTbfE

What’s going on? I didn’t see it at the time, but Vice reported several days ago that hundreds of mail-sorting machines are indeed being taken offline, not just moved around to facilities that need them more. But here’s the twist: The plans for that reduction were in the works on May 15, a month before Louis DeJoy became postmaster general. It’s not a Trump conspiracy. It’s just … odd. “Multiple sources within the postal service told Motherboard they have personally witnessed the machines, which cost millions of dollars, being destroyed or thrown in the dumpster,” Vice reported, corroborating Walker’s reporting. If the machines are redundant because there’s not enough mail to justify their use right now, why not just shut them off? What’s to be gained by destroying them? How many of these machines will need to be replaced next year, after the vaccine arrives and the economy begins to recover in earnest?

Presumably the destruction of the machines will stop now that DeJoy’s ordered a freeze to the agency’s reorganization. Or maybe not: Pelosi says she spoke to him this morning and was told that he has no intention of replacing any decommissioned mail-sorting machines or reinstating full overtime, which is the key to why mail delivery has slowed down.

NEWS: Pelosi on call with DeJoy: "The Postmaster General frankly admitted that he had no intention of replacing the sorting machines, blue mailboxes and other key mail infrastructure that have been removed and that plans for adequate overtime … are not in the works." #USPS pic.twitter.com/hkiOveUu2Q

Whether that’s true or just a case of Pelosi exaggerating what DeJoy said because she wants to continue to milk the paranoia over this for votes this fall is unknown. We’ll hear from him in 48 hours when he sits down with Ron Johnson’s Homeland Security Committee.

Whatever happens, the losing side in November is all but certain to declare that it’s been cheated: The share of Americans who believe the votes will be accurately counted this year is down to 56 percent, a 10-point drop from 2016. By Election Day it’ll be below 50, especially if Trump keeps talking like he did in the clip below. But that’s the point, right? The fewer Americans trust the outcome, the less blame he’ll take for it if he falls short. Exit question via a Bloomberg reporter: Since when did Trump decide that drop boxes for ballots are also fraud-prone? He seemed perfectly fine with them four years ago.

“I really think was a disservice to the process and a disappointment to millions of Americans.”

GOP closing gap with Democrats on voter registrations in Florida

Did Jerry Nadler Have An Accident on Live TV?

350K Dead Registrants, Ballots Counted 9 Days After Election Day: What the Heck Is Going On?

Cosmopolitan: Support the brave protesters in Louisville, donate to pay their bail

Shooting is a crime, it is not protesting.

Breaking: Biden calls lid for the day at 9:26 am ET; Update: Ninth half-day this month?

There is a problem with the words.

Woke Prince Harry and Meghan get out the vote for Biden, Trump responds perfectly