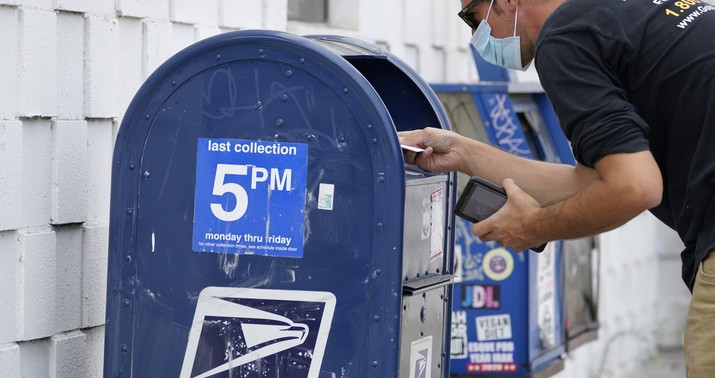 The right move, as it never made sense to start a massive reorganization right now. Get the ballots delivered, keep essentials moving quickly during the pandemic, start the belt-tightening once it’s all over.

BREAKING: USPS Postmaster General Louis DeJoy says in a statement of his delay-causing policy changes: "To avoid even the appearance of any impact on election mail, I am suspending these initiatives until after the election is concluded."

I’ll be curious to know if this was done at the White House’s behest or if DeJoy himself took the initiative. The WSJ has more detail:

Postmaster General Louis DeJoy said the U.S. Postal Service is suspending operational changes, like removing mail processing equipment and collection boxes, until after the November election, as the agency tries to reassure Americans that it can handle the anticipated surge in mail-in voting.

Mr. DeJoy also said the agency won’t change retail hours at post offices across the country or close any mail-sorting facilities. He said overtime hours will continue to be approved as needed to process mail.

It sounds from Politico like this was a true capitulation: “One of the people said DeJoy had offered to suspend [his reorganization] for the 10 days before the election, but Pelosi and Schumer said he should suspend the changes now and that none of them are acceptable in the middle of a pandemic and right before an election.” He’s apparently come around to their view. The USPS had planned to remove 671 mail-sorting machines as part of its cost-cutting program, but no more.

It was the halt to overtime that had been the key factor in mail delays lately, per recent reporting. Does DeJoy intend to return to the status quo ante on that, in which overtime is approved until all the day’s mail is processed, or is he merely promising not to impose new restrictions that might cause further delays? That’s a key question for his upcoming testimony.

Also, does this mean that the lawsuit 20 states were planning against the Postal Service is now moot?

At least 20 states plan to file lawsuits this week against the U.S. Postal Service and its new postmaster, Louis DeJoy, seeking to reverse service changes that have prompted widespread reports of delays and accusations of an intentional effort to thwart voters from mailing their ballots this fall.

The suits, expected to be filed in federal court imminently, will argue that the Postal Service broke the law by making operational changes without first seeking approval from the Postal Regulatory Commission. They will also argue that the changes will impede states’ ability to run free and fair elections, officials from several state attorney general offices told The Washington Post.

“We’re trying to stop Trump’s attacks on the Postal Service, which we believe to be an attack on the integrity of election. It’s a straight-up attack on democracy,” Maryland Attorney General Brian Frosh (D) said in an interview. “This conduct is illegal. It’s unconstitutional. It’s harmful to the country. It’s harmful to individuals.”

Maybe they’ll put their complaints in a drawer, to be used later if DeJoy restarts the reorganization after the election without approval from the Regulatory Commission.

I linked this poll in a post last night but it’s worth skimming now if you missed it. The early numbers for Trump on the USPS slowdown are brutal. Asked “Do you approve or disapprove of President Trump’s effort to block funding for the postal service to prevent mail-in voting in the election?”, voters split 28/59. True independents as well as those who are undecided in the election each disapprove at a clip of 65 percent or better. Voters also agree that the USPS should get the funding it needs to ensure that there are no delays during the election, 62/21.

Trump’s instinct when Democrats come at him is to fight. If DeJoy is backing down before he’s even faced Pelosi et al. at a hearing, it must be that the White House’s own polling on this issue is so bad that the president sees retreat as a matter of pure self-preservation. And he may be right to do so.

Democrats are still going to hammer him for wanting to block stimulus funding for the Postal Service in order to discourage universal mail-in voting, but DeJoy’s capitulation should help defang those attacks. After all, it was his cost-cutting measures that threatened the USPS’s ability to deliver ballots before Election Day if they’re sent in the final days of the campaign, not Trump’s reluctance to throw more money at the agency. They can deliver the votes in a timely way with the funding they have now. All DeJoy had to do was let them do so, and it sounds like he will by reverting to the old overtime rules — if in fact that’s what he’s doing.

Even so, it might not ease the current media-fueled paranoia about anything and everything having to do with the Postal Service:

When I called up Hartford Finishing, Inc., a woman on the phone confirmed that they have a government contract for the mailbox refurbishing and that they "get them from all over and make them look good again" (2/8)

To find this location on Google, you have to search for "Hartford Finishing". It's a side road, not like you can spot the mailboxes from a highway. The sign for the business is 20 feet away from the mailboxes. To omit all this from the caption is journalistic malpractice. (4/8) pic.twitter.com/DIvUTj9urb

Especially since @Reuters is a wire service, other news orgs are going to use these pictures as evidence of Trump tampering with the USPS. When it's later revealed that it was just a place where mailboxes get refurbished, trust in news organizations is further eroded. (6/8)

For the non journalists out there: I get it, you're anxious about the election. And maybe there ARE shenanigans going on! But this is the wrong way to conduct journalism and why you don't run stories based on random info on social media without vetting the hell out of it. (8/8)

The GOP’s going to do something clever on Friday by having DeJoy testify before Ron Johnson’s Senate Homeland Security Committee. Remember that House Dems scheduled a hearing with him for next Monday, knowing that that’s the start of the Republican convention. They were hoping to have headlines about DeJoy’s testimony drown out the convention coverage. Instead Johnson’s going to bring DeJoy in before a friendlier committee a few days earlier and have him share all of the information he was planning to share with Democrats, including his opinion of whether the USPS really needs the $25 billion Pelosi is demanding. That way it’ll circulate over the weekend. House Democrats will still get their chance to squeeze some sort of damning admission out of him about Trump’s role in all this, but he’ll be old news to some extent when he sits down with them on Monday.

There’s risk to Johnson’s gambit too, though. Instead of House Dems wasting most of their time at their own hearing teasing basic facts out of DeJoy, now they get to have Johnson do it for them. They can use their own hearing to ask pointed follow-up questions and pursue inconsistencies in his testimony along with the requisite angry grandstanding they were planning on doing. I hope this doesn’t end up backfiring on Johnson.

By the way, among the members of Johnson’s Homeland Security Committee is — ta da — Kamala Harris. She’ll be taking a break from the campaign trail, sort of, by attending the hearing and putting on a show for the cameras by angrily grilling DeJoy.

Opinion: The Steps Towards Revolution or Hostile Takeover From Within (Part II, What Is Happening?)