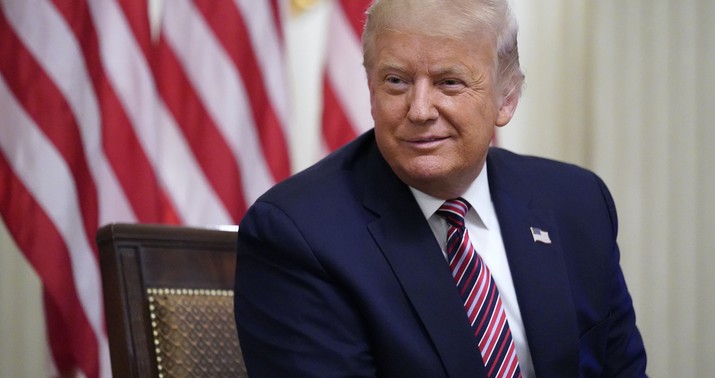 There’s something familiar about this.

On the day he said that, he trailed Hillary in New York by 21 points. He ended up losing the state by 21 points. Today he trails Biden there by 24 points.

What do you suppose the final margin will be?

Trump fans will insist that he’s just trolling by saying this. I agree. Ninety-five percent probability:

In New York City, “shootings are double, murders, everything has doubled and tripled. And I’ve heard numbers, 244 percent on some kinds of crimes. What is it, 277 percent [for shootings]?” Trump said.

He continued: “We did well last time, but to get over 50 percent is hard for a Republican. But we’re putting New York in play. We’re going to play it very strong and very hard. And we are going to try to win New York.”

“We’re going to invest in there, we’ll visit,” he promised the New York Post, which may be a simple case of him telling his audience at the moment what it wants to hear. If you’re talking to a New York paper, you need to signal interest in New York, right? He did keep his promise about visiting today — because, unfortunately, his brother is ill and in the hospital there — but I’m going to guess that the Trump campaign will not, in fact, be devoting resources to New York at a moment when Biden has caught up in fundraising and is threatening in red strongholds like Texas and Georgia.

Still, he’s going to keep up the illusion a bit longer:

He should abandon the state if for no other reason than that Andrew Cuomo managed to cleanse New York of a not insignificant percentage of its nursing-home population through sheer incompetence and yet he continues to enjoy gangbusters approval ratings. There are blue states, there are deep blue states, and then there are “still voting Democrat even if you liquidate all the senior citizens” zombified blue states.

Not a good electoral investment for a Republican. Trump should observe the pile of skulls outside the gates of Darth Cuomo’s kingdom and think twice about attacking.

Plus, there’s this new polling from Fox. Does this sound like an opportune moment for the “small(er) government” candidate to make inroads in an ultra-liberal state?

That’s a national poll, not a poll of New York. Voters are now 57/36 on wanting government help in our supposedly 50/50 “center-right” country. If it’s like that across America, imagine what it’s like in NY. Especially at a moment when Democrats in Congress are pushing $3 trillion in relief and the Senate Republican response is, “Nah, time to end the freeloading.” The GOP is playing electoral Russian roulette by rediscovering its fiscal conservative roots right now.

Trump must grasp all of that on some level. So, yeah, 95 percent chance that he’s trolling by claiming he’s going to contest New York.

But there’s still that remaining five percent. We shouldn’t underestimate the ability of a grandiose narcissist to convince himself that he’s more popular than he is, especially in a state where he was born, raised, made his money, and became one of its most famous citizens. I’m not saying he’s going to convince the campaign to spend $10 million there. I’m just saying that, in some part of his mind, he must believe “New York still loves me.”

Nor should we underestimate the Trump White House’s ability to view situations optimistically even when there are all sorts of indicators pointing the other way. Politico reported a few days ago that Team Trump feels increasingly confident about its handling of the pandemic and his resulting electoral prospects even though (a) thousands of kids are already out of school either because they’re infected or have been forced to isolate, (b) COVID is expanding in Georgia, where many schools are open, (c) testing is still a mess, including in hot-spot states like Texas, and (d) if you go by “excess deaths,” we’re probably already over 200,000 fatalities and comparable to the death toll at this stage from the 1918 killer flu.

The head of the CDC said the other day that if Americans don’t continue to wear masks, social-distance, wash their hands, and stay away from crowds, this fall could be the biggest public-health disaster in the history of the United States. If you can look past all that and still believe that the prognosis is growing brighter, why couldn’t you believe that there’s a comeback brewing in New York?