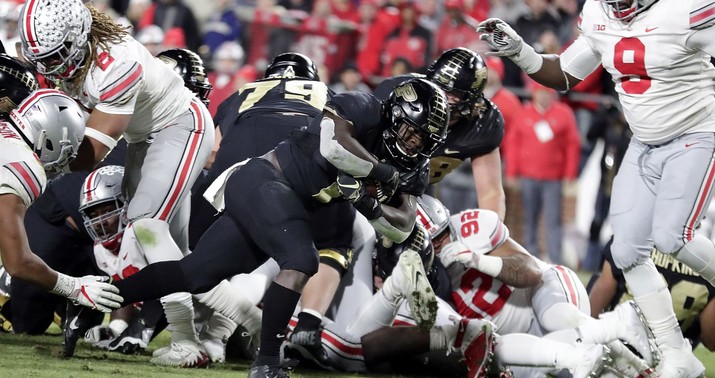 I’m stunned even though we’ve known for more than 24 hours that the conference’s school presidents had voted overwhelmingly to postpone the season until spring. I thought the ferocious pushback they got yesterday from college football players, coaches, and various Republican politicians, including Trump himself, would make them reconsider. An ACC official told CBS last night that their conference absolutely intends to play this fall despite the Big 10’s trepidation. That would be the clincher in getting the Big 10 to reverse, I thought — the sight of teams from other conferences on the field in September would be so demoralizing to Big Ten athletes that it might trigger a wave of transfers.

I was wrong. Word came down a few hours ago that they’re really doing this.

In making its decision, which was based on multiple factors, the Big Ten Conference relied on the medical advice and counsel of the Big Ten Task Force for Emerging Infectious Diseases and the Big Ten Sports Medicine Committee.

“Our primary responsibility is to make the best possible decisions in the interest of our students, faculty and staff,” said Morton Schapiro, Chair of the Big Ten Council of Presidents/Chancellors and Northwestern University President.

“The mental and physical health and welfare of our student-athletes has been at the center of every decision we have made regarding the ability to proceed forward,” said Big Ten Commissioner Kevin Warren. “As time progressed and after hours of discussion with our Big Ten Task Force for Emerging Infectious Diseases and the Big Ten Sports Medicine Committee, it became abundantly clear that there was too much uncertainty regarding potential medical risks to allow our student-athletes to compete this fall.

Is the Big 10 going to crack up because of this? Nebraska, one of the two schools that reportedly voted to proceed with sports yesterday, sounds like it’s still eyeing football this fall:

A statement from Nebraska leadership. pic.twitter.com/tFMlYSfnWe

As I was writing this post, word came down that the PAC-12 is done too:

Source: The Pac-12 has cancelled the fall football season. The league will attempt to play in spring.

Michigan coach Jim Harbaugh pleaded with skeptics yesterday to let the season proceed, vowing that the virus can be controlled. Ohio State’s athletic director believes the start of the season should be delayed but not postponed until spring. (Why wait to begin play until the virus has had more time to build up a “second wave” this fall?) Trump wants everyone on the field, of course, as the reality of Americans missing out on a cornerstone of the country’s sports culture will drive home in an unusually stark way how vulnerable we’ve been, and continue to be, to the disease’s spread under his administration.

The student-athletes have been working too hard for their season to be cancelled. #WeWantToPlay https://t.co/lI3CCKZ4ID

Tim Miller of the Bulwark transcribed this Trump response when he was asked today in an interview with Clay Travis about getting football back this fall:

They want to play football and they know better than anyone else . . . One of the great doctors said these people are so powerful and so strong and not lots of body fat, maybe none in some cases, they’re very healthy people. People don’t realize it’s a tiny percent of people that get sick and they’re old and it just attacks old people especially old people with some kind of a physical problem, a weight problem…

What you didn’t hear in his answer, noted Miller, is any plan for making it safe for the players to play. Nothing like the NBA “bubble,” for instance. He’s either engaged in pure wishcasting that no one will get infected or, more likely, he thinks players getting infected will be no big deal — both quintessentially Trumpy responses to the pandemic. Here’s Lou Holtz sounding similar:

NBC News: According to California state records, President Trump — while a private citizen — twice donated to Kamala Harris while she was a candidate for state AG.

They’re not liberating Europe, Lou, they’re providing people with a weekly excuse to tailgate. And even if players don’t develop a serious illness, football teams are large-ish organizations that could set off chains of transmission in many directions, some of which might eventually reach people Holtz’s age.

The idea that football players are at near-zero risk for death is a red herring. It’s true, but the universe of possible outcomes from COVID isn’t “death” and “three days of fever.” The Red Sox’ top starting pitcher, Eduardo Rodriguez, has been shut down for the year because he developed heart inflammation after getting infected. Sports Illustrated published a piece just two days ago about the worries over heart problems among college football’s powers that be:

Of all the hurdles impeding a 2020 college football season, there is one roadblock that has gone mostly overshadowed, buried beneath the other more prominent obstacles, such as testing, travel, a bubble-less college campus and quarantine requirements. That hurdle? The heart.

In fact, the brewing heart issue is a topic on recent calls among the Power 5 conference medical task force, including commissioners and team doctors. Fear over myocarditis has reached the top level of the sport, with Big 12 commissioner Bob Bowlsby and Big Ten commissioner Kevin Warren having both privately expressed serious concern over the condition. One Power 5 team doctor, who is privy to conference commissioner calls, says the heart condition is a primary topic during discussions. “We discuss it on every call,” the doctor says under the condition of anonymity.

One team doctor told SI that he knows of around 10 post-COVID cardiac “impacts” across college football right now. At least one player has developed an enlarged heart, according to one team’s trainer. How long these conditions will persist is unclear. But you can imagine the backlash if a player gets infected during the season and loses a chance to play professionally because his heart never quite gets back to 100 percent — or, God forbid, if a player outright dies. Asking guys to play during COVID is a bit like asking them to play wearing slightly sub-standard helmets. Will most be okay? Sure. Will everyone be okay? Maybe not. Could we have a very bad outcome that would be difficult to justify in hindsight? Yeah.

Now we wait to see what the SEC, ACC, and Big 12 do. If Nebraska wants to join the Big 12 this year, can the Big 10 stop it? If USC wants to go play in the SEC, is that okay? If worse came to worst, I assume schools could just dispense with conferences this year and go their own way. The top 16 programs in the country could cobble together a schedule in which they play 10 games against each other, say, and then the top four finishers play for the national title. We can limit exposure by reducing the number of games and focusing resources to prevent infection among those 16.

Update: This doesn’t sound like a man who’s preparing to cancel sports.

“I remain comfortable with the thorough and deliberate approach that the SEC and our 14 members are taking to support a healthy environment for our student-athletes.” pic.twitter.com/djNfKrOoyJ