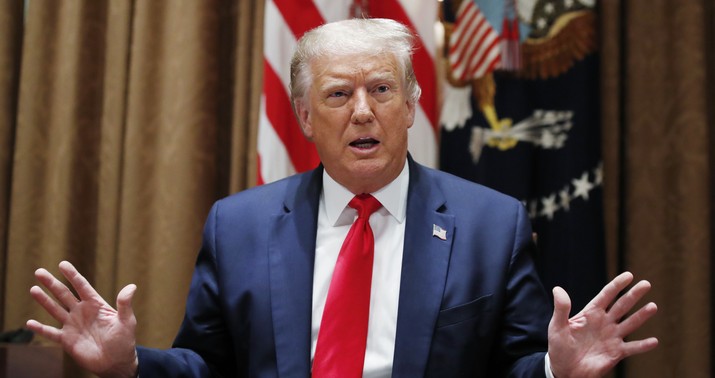 It makes me laugh that he had this change of heart at a moment when the sh*tshow in New York over mail-in voting continues to get worse. Normally that would be an opportunity for a presidential I-told-you-so victory lap. “Andrew Cuomo’s even worse at running elections than he is at managing nursing homes. Sad!”

But there are countervailing considerations here.

It’s been clear for months that Trump’s crusade against voting by mail has enormous backfire potential for him and the GOP. He’s not scaring Democrats away from mail ballots by ranting about them every day, he’s scaring his own party. GOP state and national officials have pleaded with him publicly and privately to back off, fearing that the party will be at an insurmountable disadvantage on Election Day if circumstances arise that make it difficult to vote in person, whether weather-related or COVID-related. If Republicans are waiting until the day of to cast their ballots, and we end up in the middle of a ferocious coronavirus second wave on November 3, many GOPers might feel they have no choice but to protect themselves by staying home. Meanwhile, many (if not most) Democrats will have already voted by mail. Result: A total wipeout nationally.

Trump has to back off and start bringing Republicans around to voting by mail, using whatever lame face-saving excuse he prefers. Today he finally did — in one state.

Whether you call it Vote by Mail or Absentee Voting, in Florida the election system is Safe and Secure, Tried and True. Florida’s Voting system has been cleaned up (we defeated Democrats attempts at change), so in Florida I encourage all to request a Ballot & Vote by Mail! #MAGA

Why’d he choose Florida specifically? It’s not that their system is so much safer than anyone else’s. It’s strategic:

1. The margin of victory is always small there, so every vote counts.

2. There are a disproportionate number of senior citizens, who may be even more inclined to stay home instead of voting in person on Election Day due to the health risks from COVID.

3. Florida is currently the site of one of the worst outbreaks in the country, bad enough to have forced Trump to cancel the Jacksonville component of the GOP convention. Hopefully the outbreak will dwindle the same way New York’s eventually did, but there’s a nonzero chance that it continues at its current rate, or worse, until November.

4. Lefty Brian Beutler’s right that the whole election probably comes down to Florida, as usual:

2) Florida is filled with seniors.

3) If Trump discourages Republicans from voting absentee there during a pandemic, Biden wins the state, and thus the whole election, ON ELECTION NIGHT.

There are other paths to victory for Biden (a clean sweep in the Rust Belt, or Arizona plus Michigan and Pennsylvania) but Beutler’s correct that if Biden has enough of a margin for Florida to be called on election night, it’ll blow up Trump’s plan to point to the mail-in votes counted in the days after November 3 as evidence that Biden cheated to win. He has no path to a second term without FL. At a minimum, he needs to be ahead in the state once the day-of votes are counted on Election Day to have any remotely credible claim that he “really” won the election.

5. Not coincidentally, Politico had a story out this morning about just how badly Trump’s criticism of mail-in voting is hurting the GOP. The main focus of the story? Florida, of course.

New private polling shared first with POLITICO showed that Republicans have become overwhelmingly concerned about mail balloting, which Trump has claimed without evidence, will lead to widespread voter fraud. A potentially decisive slice of Trump’s battleground-state base — 15 percent of Trump voters in Florida, 12 percent in Pennsylvania and 10 percent in Michigan — said that getting a ballot in the mail would make them less likely to vote in November…

Overall, 53 percent of voters in Florida and about half in Michigan and Pennsylvania expressed health concerns about casting their ballots in person and prefer voting by mail in November…

In Florida, 302,000 more Democrats have enrolled in the state’s vote-by-mail program than Republicans.

He’s literally talking his own fans into boycotting the election. On top of that, Trump voters skew older than Biden voters, which means they’re more apt to get cold feet at the last minute about in-person voting in the middle of a COVID second wave. WaPo reports that even RNC chair Ronna McDaniel has taken to begging Trump to “present a more nuanced message” on when voting by mail is and isn’t okay. There does seem to be a lot of confusion about that, if not outright rejectionism of mail ballots after months of Trump messaging:

Alabama Secretary of State John Merrill, describing a recent meeting with a group of Republican voters in Fort Payne, said he felt compelled to explain that there is only one kind of mail-in voting in Alabama, and that it is safe and secure.

“They were confused about two different kinds of mail-in balloting,” he said, “where one is ‘good’ and one is not.”…

“It is a problem,” said one Republican strategist in North Carolina. “The president has oversimplified the issue to criticize the method of voting, rather than the way it’s done. The details matter.”

One North Carolina Republican official posted a plea on Facebook encouraging people to take advantage of the absentee ballots mailed to them. Zombified MAGA fans replied with comments like “Burned it!” and “You know damn well that we are arguing against this, and here it is our own damn party sending this horse dung out?!!!” In Iowa, the Republican-controlled legislature barred the secretary of state from sending out applications for mail-in ballots statewide — only to find local officials in Democratic-controlled counties mailing them out instead. That’s a microcosm for the entire party’s dilemma right now: Republicans are only spiting themselves. Eventually the legislature backed off and allowed the state to proceed in hopes of equalizing GOPers’ access to ballots.

An easy prediction, then. Trump’s going to end up declaring that the systems in Michigan, Pennsylvania, Wisconsin, Arizona, and North Carolina are also sufficiently “safe” that Republicans there have his blessing to vote by mail. All of those are key swing states, of course, and all of them allow for no-excuse “absentee” voting, which is indistinguishable from mail-in voting. Where Trump’s going to end up drawing the line, I assume, is at states automatically mailing ballot applications to people instead of forcing voters to jump through the hoop of requesting an application first. Mail-in voting is fine, he’ll decide, but we can’t have states sending out applications willy nilly, not knowing who might get hold of one or more of those applications and try to vote illegally. “Somebody got a ballot for a dog. Somebody got a ballot for something else. You got millions of ballots going. Nobody even knows where they’re going,” he told Axios. McDaniel’s already hammering that distinction today:

.@realDonaldTrump was right, and Axios was wrong about mail-in voting.

The plan is for millions of ballots to automatically be mailed to voters in states like CA & NV.

What’s worse, Democrats are suing to make that a reality in more states like MN & NM. (1/3)

If there is chaos on Election Day, Democrats will only have themselves to blame!

The wrinkle is that five states (Colorado, Hawaii, Oregon, Utah, and Washington) already conduct elections entirely by mail, raising the question of whether Trump thinks the results in those states should be disqualified as presumptively unreliable or not. Since none of them are likely to be competitive, he probably doesn’t care.

Hopefully most Americans will avert an election-night uproar over mail-in voting by choosing to vote in-person early instead. Normally I loathe early voting since sometimes events occur between the time a ballot is cast and Election Day that might have changed some voters’ minds, but it may be the least bad option this year. Exit question: Didn’t Trump say a few days ago that we need to know who won the election on Election Day itself in order to have confidence in the outcome? What’s left of that message now that he’s backing mail-in voting in Florida?