GOP officials beg Trump: If you don’t endorse voting by mail we might get blown out 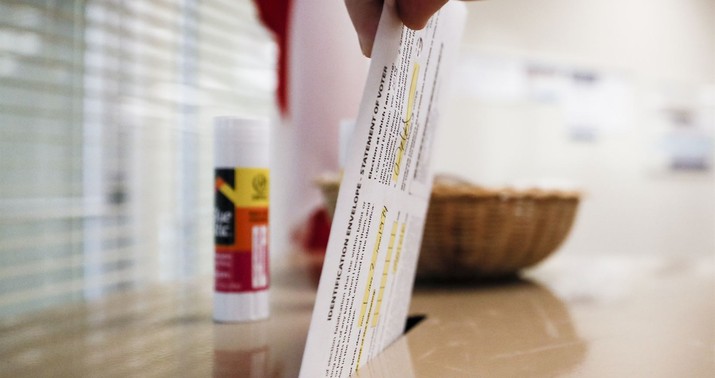 Voting by mail has become the electoral equivalent of mask-wearing. In both cases, with some degree of encouragement from the president, a meaningful number of righties have concluded that it’s illegitimate and refuse to participate in it. In both cases, the Republican establishment has watched that play out and been horrified by the potential electoral implications. If Republicans don’t wear masks then the virus will spread more aggressively and Trump’s polling will suffer. If Republicans don’t vote by mail then Democrats will enjoy a GOTV advantage that may prove decisive in close-run states on Election Day.

In both cases, party leaders have tried to persuade Trump to change course — although that’s where the similarities between masks and mail-in ballots end. Trump was never strongly anti-mask even though he was averse to wearing one in public for months and described mask-wearing at least once as “politically correct.” He is, however, strongly against voting by mail. He’s denounced it as fraud-prone so many times that it’s hard to believe he’d ever change his mind about it, even if GOP strategists could get through to him that the party is kneecapping itself by eschewing this method of voting.

The best-case scenario is that they keep after him and keep after him and finally after many months he relents. That’s what happened with masks, when he finally donned one for his trip to Walter Reed. The problem with mail-in voting is that he doesn’t have many months left before Election Day to undo the damage from his current stance. The sooner he starts deprogramming MAGA Nation by embracing voting by mail, the sooner Republican voters can start their applications for ballots. But there’s no reason to think he’s willing to do that. People have been warning him for months already that he’s risking his own reelection by refusing to budge on this, yet he’s refused to budge.

All local Republicans can do is keep trying:

Behind the scenes, top Republicans are urging senior Trump campaign officials to press the President to change his messaging and embrace mail-in voting, warning that the party could lose the battle for control of Congress and the White House if he doesn’t change his tune, according to multiple GOP sources. Trump officials, sources said, are fully aware of the concerns…

[Wisconsin county GOP chair Rohn] Bishop added bluntly: “I’m getting aggravated because I think we’re only hurting ourselves. … Anything that ties an arm behind my back, I don’t like that.”…

While Trump has claimed that vote-by-mail will be a disaster for Republicans, recent election results suggest that’s not necessarily the case. In California’s 25th District, a special election to fill former Democratic Rep. Katie Hill’s seat was conducted almost entirely by mail, with Republican Mike Garcia easily winning the seat over Democrat Christ Smith, 54%-46%.

Yikes — just finished a statewide survey in a swing state. The quarter of the voters who plan to vote by mail or absentee break 15% Trump/75% Biden on the Pres. ballot. Republicans are skeptical about voting by mail, and that's a problem up and down ballot.

At least one Republican state party is so frantic to get members to consider voting by mail that they’ve taken to doctoring Trump’s tweets on the subject to make him sound more supportive of the practice than he really is:

In a mass-solicitation designed to boost flagging interest in registering to vote by mail, the Republican Party of Florida featured a Trump tweet from June 28 that praised absentee ballots but that had his opposition to mail-in voting strategically edited out.

“Absentee Ballots are fine. A person has to go through a process to get and use them,” Trump said in the tweet. The rest of the quote was blurred out: “Mail-In Voting, on the other hand, will lead to the most corrupt Election is USA history. Bad things happen with Mail-Ins. Just look at Special Election in Patterson, N.J. 19% of Ballots a FRAUD.”

There’s no difference between absentee and mail-in voting in Florida, which is where the president himself votes. According to Politico, 423,000 more Democrats than Republicans so far have signed up there for mail ballots; the final margin between Trump and Hillary in Florida in 2016 was 113,000 votes.

One Republican consultant told the paper, “It’s sad that the GOP’s strategy to win an election is to scare the living s— out of the base with deceptive lies and conspiracy theories. It’s working for now, but it’s a bad long-term strategy that will hurt the party in the future.” It’ll be grimly ironic if the base’s cultish devotion to Trump ends up finishing him off this fall by marching off a cliff on the issue of voting by mail, and it’ll be even worse if that suspicion about mail-in ballots persists through future cycles. The party may lose more than one election because of this.

Which is not to suggest that mail-in voting is optimal: Rather the opposite, as Ed explained a few days ago. Ideally we’d all vote at polling places on Election Day. But given this country’s abiding inability to contain the coronavirus, there’s every reason at the moment to think we’ll face a dangerous public-health situation in November. The only thing worse than a gigantic mail-ballot clusterfark that lasts for days after November 3 would be forcing Americans to risk catching COVID-19 while waiting in line for hours to vote at their local high-school gyms.

If Trump’s serious about resisting voting by mail to the bitter end, he should be pushing hard right now to relocate as many polling places as possible outdoors this fall. If that means Minnesotans have to bundle up and wait in line during a snowstorm to vote, that’s what it means. (Sorry, Ed.)

There’s an eight-dimensional-chess theory for what Trump’s doing by opposing voting by mail so stridently, though. If he’s convinced that he’s destined to lose this fall and if he intends to cry foul when he does then it’s in his interest to discourage Republicans from mail-in voting. It achieves two things for him. First, it sets him up to claim later that Biden’s victory is owed purely to ballot-stuffing, not unlike how he claimed in 2016 that Clinton’s popular-vote win was due to illegal aliens crashing the polls. Second, it creates a dynamic in which he’ll end up way ahead by the time everyone goes to bed on Election Night thanks to the much higher percentage of Republicans who’ll have voted in person that day than Democrats. Then, when Biden zooms past him as all of the Democratic votes are counted in the ensuing days, Trump can claim that an election which he “won” is being stolen from him after the fact. (This nightmare scenario is so predictable that some elections experts have already begun warning about it in print.)

I don’t think he’s playing eight-dimensional chess. He was complaining about voting by mail long before his polling against Biden began to collapse. He probably doesn’t believe he’s likely to lose the election even now. I think he opposes mail-in ballots for the simple reason that he suspects (probably correctly) that there are more Democrats than Republican in the United States and thus the easier it is for people to vote, the more likely a Democratic victory is. But he’s certainly amoral enough to scream about election fraud in the nightmare scenario I’ve described even if Biden ends up winning by 10 points once all the mail votes are counted. He might even talk himself into believing it. The only way to avert that outcome is for Biden to win so big that he tops Trump even among people who vote in person on November 3. That seems highly unlikely, but that’s what it’ll take.

Democratic fear-mongering about the coronavirus vaccine is working

Anyone else get the feeling that the media really don't want to cover the most problematic details in Hunter Biden report? [screenshots]

Fed up Reporters Blow Lid off Kamala’s Limited Availability, One Says It ‘Has a Foul Stench of Insecurity’

Court rules Maine can use ranked-choice voting in POTUS election

Screw up the vote

“This is one of those rare cases …”

Biden gets the McCain endorsement after all

“I just felt like it was time to take a stand on this.”

“Down payment” for further defunding by next year.

What’s in a name? Quite a bit in this case

Alexei Navalny is out of the hospital and pretty upset

Back on his feet, hitting the street

Get ready for Plan B.

No charges to be filed in mail-ballot toilet display

McConnell: Let us list all the ways in which Schumer is “a uniquely non-credible messenger” on judicial norms

“Our colleague built an entire personal brand out of filibustering judicial nominees.”

Data: Rate of infection among students and teachers at U.S. schools thus far is below 0.5%

“It’s reasonable to say that it looks promising at this point.”