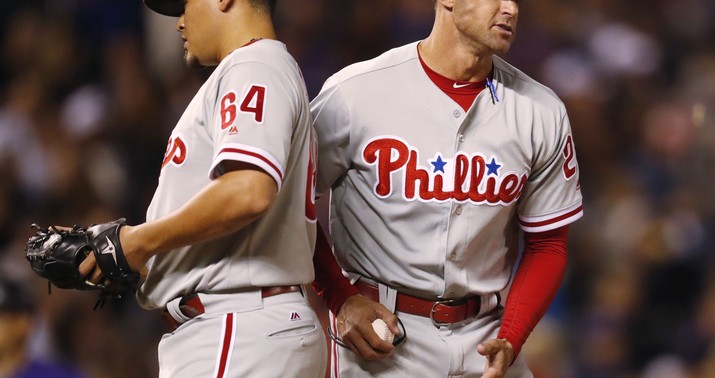 Which team was it that the virus-plagued Miami Marlins last faced before their season had to be temporarily shut down? Ah, right, the Phillies.

That’s not to say that Miami can definitively be blamed for the infections Philadelphia is suddenly experiencing but they’re the prime suspect at the moment. Which is hugely demoralizing for baseball, as previous testing this week revealed that the Marlins were the only team with any cases. All 29 other squads had taken precautions sufficient to avoid COVID-19. That created a glimmer of hope that baseball didn’t have a coronavirus problem, Miami had a coronavirus problem. The season might be able to proceed to completion after all, with the scare created by the Marlins possibly benefiting the game in the long run by convincing players elsewhere not to take needless risks away from the park.

It’s not a Miami problem anymore, though.

The Philadelphia Phillies have canceled all activities at Citizens Bank Park, including a weekend series against the Blue Jays, after a member of the coaching staff and a member of the home clubhouse staff tested positive for the coronavirus, the team announced Thursday…

The Phillies have not played since Sunday. They are currently not scheduled to play until a four-game series against the Yankees — in New York on Monday and Tuesday and at home Wednesday and Thursday…

The new positive tests Thursday come after an attendant for the visiting clubhouse tested positive after a weekend series against the Miami Marlins, who have had 19 positive tests in the past seven days, sources confirmed.

So the clubhouse attendant was presumably in the same space as the Marlins at the same time or shortly thereafter. Why didn’t the league halt the Marlins/Phillies series last weekend immediately after Miami players began testing positive?

MLB has already had to rearrange the schedule on the fly to accommodate the Marlins and Phillies being out of action. Now that Philadelphia’s barred from playing through this weekend, it’ll mean that both teams have lost 10 percent or so of their schedules in an already much-shortened two-month season. How’s baseball going to try to compensate for that? Ahem:

The MLB players’ association is surveying members and may propose either two seven-inning games for a doubleheader or nine innings for the opener and seven for the nightcap.https://t.co/3lSws6tc4l

At the rate we’re going, they’ll end up deciding playoff spots in late September with a multi-team home-run derby. Remember too that the best guess of scientists as to how long the virus takes to incubate is one to two weeks. Philly and Miami could be back on the field next week and new cases from the original outbreak might start showing up. What do they do then, shut down for another week? What happens the week after that, when a second outbreak seeded by putting the team back on the field this coming week starts producing positive tests? New cases are still turning up on the Marlins, if you can believe it.

How’d this nightmare chain of transmission begin in the first place? Baseball has spent the past week teetering between trying to play through the setbacks and facing the hard reality that they won’t be able to finish the season. We should want to know how the infection started to spread on the Marlins, ultimately imperiling the entire sport. If you believe baseball beat writer Bob Nightengale, it happened when at least one Marlins player decided to … have a fun night out in Atlanta during the team’s recent visit:

Well, I think a couple guys went out in Atlanta. That’s what happened. I don’t think it was any kind of fluke, from the bus driver or a pilot, any of that. I believe some guys got careless, at least one guy did for sure, he went out, and came back positive and spread it around.

It’s one thing to put your industry at risk because, say, you had to run out to the convenience store and buy formula for your newborn and got it from the cashier. It’s another to do it because you couldn’t suppress the urge to party, come what may. Nightengale’s the only reporter with this information right now, which calls its accuracy into question, but you can understand why the Marlins might be keeping it close to the vest if it’s true.

And no, this wouldn’t be the only case recently of a pro athlete putting his entire sport’s season in jeopardy for a few hours of evening enjoyment. L.A. Clippers guard Lou Williams was recently photographed at a strip club — also in Atlanta — and is now quarantined for 10 days.

It looks like baseball will — probably — make it through the end of July and into August, but things move quickly with COVID. Stay tuned.