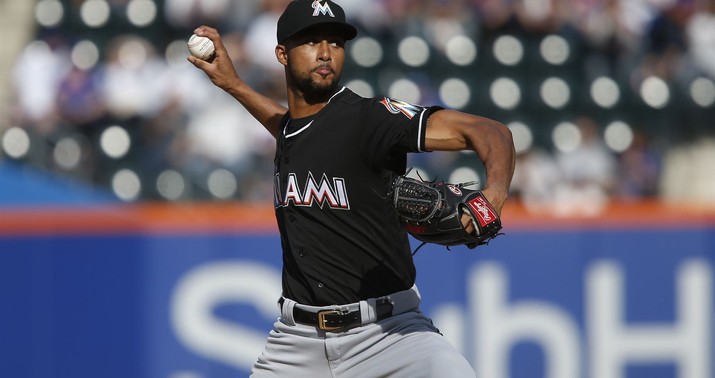 Gonna quote myself, writing on June 22 amid a wave of reports of pro and college athletes contracting COVID during preseason training: “I fear we’re headed for a future in which the various leagues press on towards resuming play despite the many warning signs, determined to do their best to give Americans something to cheer, and then there’s an outbreak on a team like four games in and the whole season is immediately called off.”

We made it three games into the MLB season.

The Marlins' home opener against the Baltimore Orioles tonight has been canceled, sources tell ESPN, as the team remains in Philadelphia and continues to undergo testing.

The status of the players is unclear right now, but:

Also hearing not all cases are asymptomatic https://t.co/05RGNlw0Nq

The Yankees/Phillies game is also at risk of being canceled. Miami was just in Philly, using the visitors’ locker room that the Yankees are set to use tonight. It’s reportedly being fumigated “50 different ways,” but how’d you like to be a New York player or coach walking into that petri dish with assurances that “We, uh, think we killed all of it”?

At least two big-name players have already had nasty bouts with the virus. The most famous is Freddie Freeman of the Braves, who overcame it and was back on the field in time for Opening Day but at one point was battling a fever of 104.5 degrees. “I said a little prayer that night. I’ve never been that hot before,” he told WaPo a week ago. “My body was really, really hot. So I said, ‘Please don’t take me.’ I wasn’t ready.” He’s well enough now to play, thankfully. Another player who “recovered” from the virus, Red Sox starter Eduardo Rodriguez, is not. He has inflammation of his heart muscle stemming from his COVID-19 infection. Recently he tired out after throwing just 20 pitches in a bullpen session. He’ll undergo another MRI in a week to see if his heart condition has improved.

There was never a Plan B for baseball — or any other sport — once a team suffered an outbreak. Plan A was to play the season with some basic precautions in place and trust team personnel to self-isolate in their off-time in hopes no one would get infected. Once that plan failed, though, there’d inevitably be a cascade effect: One game has now been cancelled, another might be cancelled soon, and it’s anyone’s guess how many players who have been on the field with Miami recently (i.e. the Phillies) might also have picked up the virus and not yet begun to show symptoms. There are so many infections on the Marlins that they may have to replace a good chunk of their roster with minor-league players. If more team members test positive in the coming days, the organization runs a real risk of not being able to field a team.

What alternative is there at that point to shutting down the entire league? Are they going to press on and crown the last team that’s able to put nine healthy players on the diamond champions?

“MLB 2020: War of Attrition” would be … interesting, and watchable in a dystopian way, but also extremely dangerous. And of course, some players may look at what’s happening to Miami and decide to simply opt out for the rest of the season. A few, including David Price and Buster Posey, did so before Opening Day. Mike Trout was on the fence about it before deciding to give it a go. Some of those guys, understandably spooked by what Rodriguez is going through, are destined to cite the Marlins’ nightmare as a last straw. Between players landing on the DL due to COVID and players deciding to pack it in, just putting a watchable product on the field will become an almost unmanageable challenge.

Things are moving fast right now. It wouldn’t be a surprise if the season is canceled before the day is out. Stand by for updates. As we wait, chew on this:

Four Marlins learned they tested positive for COVID-19 in a span of three days.

Two infectious disease experts say the positive results fit the definition of “a clear outbreak” with the club.

So why did the Marlins play baseball on Sunday? With @Jaysonst https://t.co/7Mv4Ok1K8r

Waiting to hear if the 2020 MLB season has been cancelled. Nothing definitive yet. “In jeopardy” seems to be the most texted term to me in the last 30 minutes.

I think the NBA will press on with their “bubble” plan in Orlando, since there’s at least a chance that the league can prevent players from being infected that way. But if MLB has to pack it in this soon, I don’t know how the NFL, NHL, or college football will even attempt a season. No bubble, no games.

Update: I’m going to predict that we’ve seen our last baseball game in 2020:

BREAKING: Major League Baseball to hold an emergency meeting today after 14 Miami Marlins have tested positive for COVID-19 following their weekend series with the Philadelphia Phillies.

Here’s another way of looking at Plan A:

Update: The Yankees/Phillies game has indeed now been canceled.

Update: Did they hold this meeting … indoors?

The Marlins learned before Sunday’s game that three players had tested positive for COVID-19. So they held a player’s meeting to decide if they should play against the Phillies. Can’t find that protocol in MLB’s 101-page manual.

Update: If you think there’d be no wider political repercussions from MLB having to shut down, note that this point is already being made this morning. Parents who were on the fence about giving it a go with schools reopening might not be on the fence if the virus ends up derailing a pro sports league in four days:

The best laid plans of a multi-billion dollar sports league with effectively unlimited resources has made it a week before an outbreak.