How are we going to have sports this year when athletes keep catching COVID? 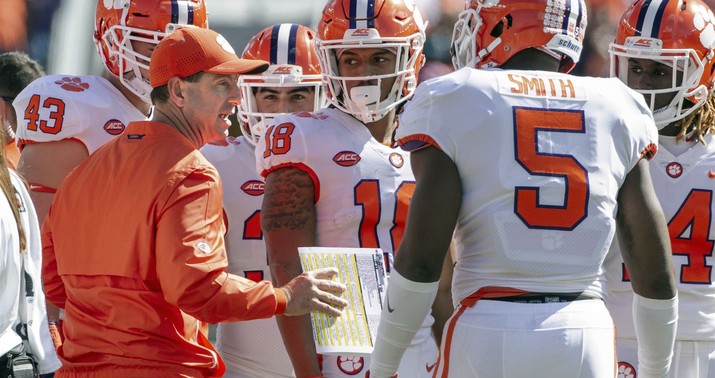 A few NBA players are already on the ground in Orlando, preparing for a season restart next month. The NHL is set to return soonish with 24 teams vying for the Stanley Cup. An MLB deal for a two-month season could be done this week, with players on the field in July. College football teams are already holding practices to prepare for fall.

Sports is back, baby.

In theory. In reality, the two teams that played for the college football championship earlier this year are riddled with COVID-19 cases. Clemson had no fewer than 23 players infected as of Friday. LSU has 30 players in quarantine, more than a quarter of the team, either because they’re infected or were in close contact with someone who is. That outbreak has been linked to a series of nightclubs near campus that some of the players visited.

How about the NHL, though? Well, since training facilities reopened a few weeks ago, more than five percent of players tested for coronavirus have been positive. They’re now self-isolating, hopefully before they managed to start a mass outbreak among their respective teams.

At least MLB’s okay! But no, they’re not really. On Friday the Philadelphia Phillies announced five players are positive. And it so happens that the two states in which teams normally hold spring (now summer) training, Arizona and Florida, are two of the biggest COVID-19 hotspots in America at the moment. All 30 teams have now shut their facilities temporarily for deep cleaning and disinfecting. Even so, according to USA Today, 40 players and staff tested positive for coronavirus in the past week alone.

And the NBA? They’re also set to play in Florida, specifically in Orlando. Which, uh…

Orange County, Florida – the Orlando area – reported a staggering 15.1% rate of positive coronavirus tests yesterday, as numbers in that area continue exploding, less than three weeks before the NBA and MLS head to Disney to resume their seasons.

The atmosphere inside the league about the surge of cases in Florida is described as “tense”:

In at least one recent call with high-level team executives, NBA commissioner Adam Silver has acknowledged the spiking numbers in Florida. Team sources described the general tone of that call, including the questions asked of Silver on it, as tense. Another called Silver’s tone “resolute but somber.” He expressed a resolve to go on — a confidence in the NBA’s bubble concept — while recognizing the seriousness of the coronavirus spike, sources said.

The “bubble” refers to the protocols the NBA is implementing to try to isolate players and staff from the outside world after they’ve tested negative so as not to risk any season-ending infections. If the bubble works perfectly then it won’t matter that Florida is experiencing a spike: Essentially the entire league will be in a group quarantine together. But no one expects it to work perfectly. One head athletic trainer told ESPN, “Everything that we know about Disney — and we’ve read over the years — is that you don’t realize how many thousands of people work there, right? That’s the magic behind it all — the amount of staff and the amount of services that they provide. And they’re in and out of the bubble.”

Bear in mind that the outbreaks in college football and the NHL are happening without players spending much time around each other yet. What happens when locker rooms are crowded and they’re in frequent contact on the field?

One possible reaction to this is to say, “Look, they’re young and they’re elite athletes. They’re not going to die.” Right. But:

Naturally, there are the many cases of people testing positive, having relatively mild symptoms, then feeling fine soon after the required quarantine. But they don’t become a mortality stat the same as the guy flat on his back doesn’t, but who can’t breath normally after.

And the players themselves are just the primary infections. The concern with COVID outbreaks, as ever, is the secondary infections that’ll result when the athletes pass the virus on to older, less healthy people. Given how much time players on a team spend around each other, we could have superspreader events in locker rooms with sizable ripple effects for friends and family.

Even the players who have gotten the disease already and recovered might not be as immune to future infection as they hope. There are new studies floating around that suggest COVID-19 antibodies might last only two or three months. An NFL player who starts the season on the DL in September due to the virus might be out again by the playoffs.

WaPo columnist Barry Svrluga says it’s time to get real about a 2020 season:

From both the inside and the outside, football looks crazy. Contact is both encouraged and required, and if you have seen football players heaving at the end of a game — bottom-of-the-lungs breaths, expelling all those droplets out again just to stand upright — you can’t help but think about what they’re doing to one another over the course of a play or a drive or a practice or a game.

“I mean, we’re going to social distance, but we play football?” Los Angeles Rams Coach Sean McVay asked during a media appearance this past week. “This is really hard for me to understand all this. I don’t get it. I really don’t.”…

If players and staff are testing positive for a virus that has killed tens of thousands of Americans even before sports really begin again, it’s worth asking: When do the positive cases — and the concern for athletes and staff — outweigh the benefit of playing games?

I fear we’re headed for a future in which the various leagues press on towards resuming play despite the many warning signs, determined to do their best to give Americans something to cheer, and then there’s an outbreak on a team like four games in and the whole season is immediately called off. There may be a domino effect too. If MLB hits the field before anyone else and they’re forced to shut down a week in because, say, 30 players are suddenly infected, my guess is that Adam Silver and the NBA will say “to hell with it” and send everyone home too. No sports this year. Fate wants us to be as miserable as possible.