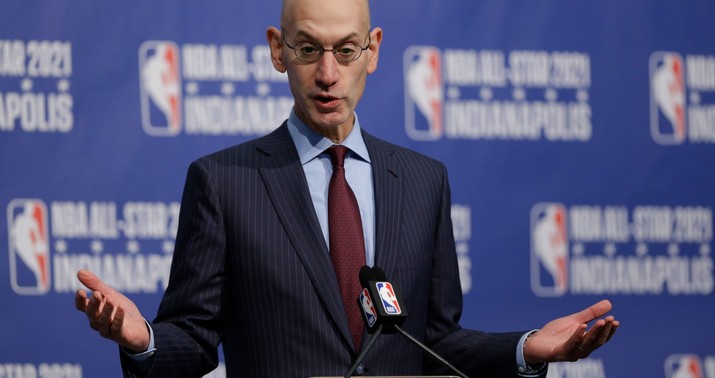 There’s nothing new or surprising in this snippet from his recent interview with Time magazine. That’s why it’s interesting. There are many reasons why an American might be less eager to tout his chummy relationship with the Chinese Communist Party today than he was, say, nine months ago. A lot has changed.

But money is still money. For Adam Silver and the NBA, the more things change, the more they stay the same.

It’s almost miraculous how poor the timing of this quote is.

Adam Silver on the NBA’s relationship with China – says he feels it has improved. “…they have a different view how things have been done, how things should be done. And hopefully, we can find mutual respect for each other.” pic.twitter.com/Dc9RFaboqN

I don’t know if there’s been a worse moment since Tiananmen Square for a U.S. businessman to be chirping about finding “mutual respect” with Beijing. Look at the news cycle that we’re confronted with right now.

There’s the endless enervating wave of coronavirus infections, China’s little gift to the rest of the planet. More than 120,000 Americans are underground, with many thousands more destined to join them, because the CCP decided that their prestige mattered more to them than frankly warning other nations about COVID-19’s infectiousness when the disease was first detected in Wuhan. Silver’s own industry may be shuttered for the year and lose millions of dollars in revenue because Florida’s still struggling to contain the pathogen China cursed us with. Yet there’s not a hint of indignation — or even ambivalence — in his answer.

But we’re just getting started. Today’s most significant foreign policy news is the CCP finalizing its intentions to crush Hong Kong. The new “security law” has passed:

Beijing on Tuesday unveiled new national security laws for Hong Kong that will punish crimes of secession, subversion, terrorism and collusion with foreign forces with up to life in prison, heralding a more authoritarian era for China’s freest city…

“The punitive elements of the law are stupefying,” Simon Young, a law professor at the University of Hong Kong’s law school and a barrister, told Reuters…

According to the law, a new national security agency will be set up for the first time in Hong Kong and will not be under the jurisdiction of the local government. Authorities can carry out surveillance and wire-tap people suspected of endangering national security, it said.

The cause that Daryl Morey got into so much trouble for championing, replete with criticism from the alleged humanitarians of the NBA for hurting their bottom line, has collapsed. On the very day that Beijing has the city by the throat, Silver is telling Time magazine how swell relations are with the government. Hong Kong’s democracy activists are in mourning, with some prominent members forced to lie low for fear of being disappeared:

[End of Hong Kong, Beginning of Reign of Terror]

1. #Beijing has just passed the sweeping #nationalsecuritylaw. It marks the end of Hong Kong that the world knew before. pic.twitter.com/QouY6Itr1O

It’s heart-wrenching to see pro-democracy activists in Hong Kong essentially tweeting farewell messages today in anticipation that they may be targeted under the new national security law.

The kicker is this AP story that appeared on the wires less than 24 hours ago. The most withering criticism thrown at Silver and the NBA back in October when Morey was getting slammed was that China operates actual concentration camps for its Uighur Muslim minority in Xinjiang — and the NBA cares so little about it that it runs a training camp in the same province. How could the league’s players lecture about civil rights violations in America without showing the barest concern for how the Uighurs are treated by Beijing? The new AP story adds an even darker wrinkle: The Chinese aren’t just interning the Uighurs, they’re practicing a form of genocide by forcibly sterilizing some of them.

While individual women have spoken out before about forced birth control, the practice is far more widespread and systematic than previously known, according to an AP investigation based on government statistics, state documents and interviews with 30 ex-detainees, family members and a former detention camp instructor. The campaign over the past four years in the far west region of Xinjiang is leading to what some experts are calling a form of “demographic genocide.”

The state regularly subjects minority women to pregnancy checks, and forces intrauterine devices, sterilization and even abortion on hundreds of thousands, the interviews and data show. Even while the use of IUDs and sterilization has fallen nationwide, it is rising sharply in Xinjiang.

The population control measures are backed by mass detention both as a threat and as a punishment for failure to comply. Having too many children is a major reason people are sent to detention camps, the AP found, with the parents of three or more ripped away from their families unless they can pay huge fines. Police raid homes, terrifying parents as they search for hidden children.

To make it that much more absurd, the NBA at this very moment is the most overtly socially conscious that it’s ever been. “Black Lives Matter” will be emblazoned on the court when the league resumes play. Players are being encouraged to replace the names on their jerseys with social-justice slogans. No one’s demanding that they prioritize human rights in China above civil rights in their home nation; just a little circumspection about what Beijing’s up to would be gratifying. Instead Silver’s legitimizing China at a moment when much of the western world has finally dropped all pretenses that their “different form of government” will ever evolve into something civilized. The guy’s a disgrace. The league deserves to be boycotted for its aggressive callousness.

Although, given Trump’s alleged views of those same concentration camps, I guess it’ll have to be the left that leads the boycotting.

I’ll leave you with this apt read from Zaid Jilani:

But they're already engaging in culture war, which in reality is just promoting slogans that don't lose them any money and aren't controversial among corporate elites. They just don't want to do anything that threatens $ https://t.co/zGRhHwebw9