Report: NBA may let players replace names on jerseys with social justice slogans for the rest of the season 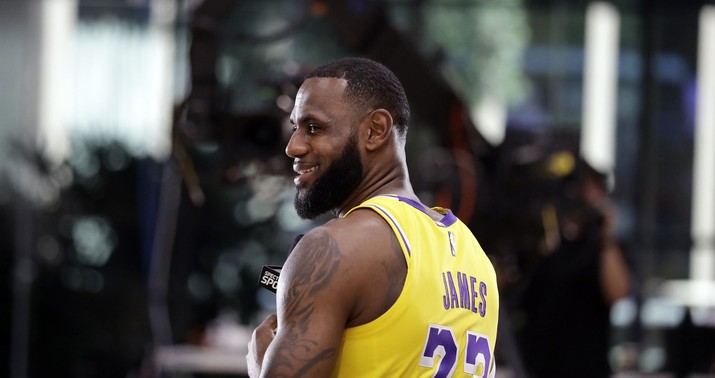 A bad idea generally. But less bad in certain permutations.

Nets guard Spencer Dinwiddie also did his best to make this idea more appealing to righties:

A lot of issues at the moment. I think the fact that the country is 26 (ironically) Trillion dollars in debt is high on the list

On the other end of the spectrum is Grizzlies’ star rookie Ja Morant, who wears the number 12 — which also happens to be slang for “police.” He posted a photo yesterday replacing the name on his jersey with a familiar four-letter word, which then necessitated this apology:

I’m struggling to articulate what bugs me about letting players woke-ify their jerseys. At first I thought it was the attempt to bring politics ever closer to the center of the action. It used to be athletes weren’t supposed to be activists; then they could be activists so long as they kept it away from the sport; now, post-Kaepernick and in the wake of the George Floyd protests, they’ll be permitted if not encouraged to demonstrate on the court/field pre-game. But we can do even better, it seems: Why not let players sloganeer on their uniforms during the game itself so that the spectator, desperate for escapism from our disease-riddled dystopian garbage reality, is constantly reminded of the issues du jour while watching hoops?

Athletes shouldn’t turn themselves into social-justice billboards during games. During games they should remain strictly corporate billboards, damn it. That’s the American way.

But I don’t think that’s the problem. It’d be fine if the league wanted to honor George Floyd with a uniform patch or armband, say. I think my objection is due partly to the political din that’ll result from each player being encouraged to advertise his own pet personal cause and partly to the fact that they’re altering the standard uniform to make it happen. It has a whiff about it of ESPN’s ill-fated turn from sports highlights to chat shows overflowing with political takes about sports.

The league may have no choice, though. There’s important background here to consider.

The personalized statements on jerseys are part of a long list of social justice messages the players plan to make through the remainder of the season, which restarts July 30 in Orlando, Florida. The NBA and the NBPA announced an agreement on Wednesday to continue to discuss fighting systemic racism and to make it one of the main focuses of the restart. Personalized jerseys could say such things as “Black Lives Matter” or “I Can’t Breathe,” bring light to a social or charitable cause or even display the names of George Floyd or Breonna Taylor, who were killed by police in recent months.

“We’re just trying to continue to shed light on the different social justice issues that guys around our league continue to talk about day in and day out,” [NBA Players Association President Chris] Paul told The Undefeated. “People are saying that social justice will be off of everybody’s mind in Orlando. With these jerseys, it doesn’t go away.”

The important background is that some players, including names as big as Kyrie Irving, don’t want to play at all this year, believing that sports will end up distracting the country from the cause of police reform and the spirit of social change that the protests have galvanized. Former NBA player Stephen Jackson, a personal friend of George Floyd’s, also dislikes the idea of playing:

“None of these white owners have spoken up. None of them are taking a stand…Playing basketball ain’t gonna do nothing but make them money and take attention off what we fighting for.” pic.twitter.com/LZbKTLzDU2

The league’s understandably nervous that Jackson’s plea, amplified by Irving and others, will catch on widely among other players and the plans to restart the season next month in Orlando will implode. So they’re making a gesture to try to placate them. Come back and play and we’ll not only let you protest before the game, we’ll let you protest during the game. Put George Floyd’s or Breonna Taylor’s name on your jersey if you like. Just get the revenue flowing again.

Nike, the official producer of NBA uniforms, is also being looped on in the decision and no doubt looking for its cut. The LeBron Lakers 23 “I Can’t Breathe” jersey will be one of their biggest sellers ever, I’m sure.

Meanwhile, a thought to consider: If the NBA allows this, won’t other sports come under pressure to follow suit? That may pose an especially interesting problem for the NFL.

In the unlikely event the NFL allows players to replace the names on their jerseys with social justice messages, the NFL surely would insist on approving the potential universe of names and messages. And then the NFL would be faced with multiple players proposing “Kaepernick” as the name on the back of their jerseys. And then the NFL would either have to let that happen, or deal with word getting out that the NFL slammed the door on that possibility.

That’s another reason for Goodell and NFL management to want Kaepernick back in the league this fall. If he’s in uniform, he’ll be less of a cause celebre for the other players.

Anyway, I’m a purist. If you want to wear a cause on the back of your jersey instead of your name, do it the old-fashioned way. Exit question: Will any of China’s loyal servants in the NBA wear a “Stop Sterilizing Uighurs” message or would that be a little too woke?

This Is How It’s Done: Police and Prosecutor Give Best Response to BLM Marchers Who Block Roads

'I predict a riot': Does leaked bodycam footage from George Floyd arrest suggest that officers were overcharged?

Woke NBA Coach: Actually, I Was Wrong About Hong Kong and Free Speech, and I Regret It

Murkowski: I wouldn’t support filling a Supreme Court vacancy before the election

In a galaxy far, far away

WSJ: Homicides up by double digits in dozens of America’s large cities

Want to guess why?

Trump testing czar: It’s time to “move on” from hydroxychloroquine

“I think we need to move on from that and talk about what is effective.”

The TikTok people have a message for President Trump

Don’t shut down our party, dude!