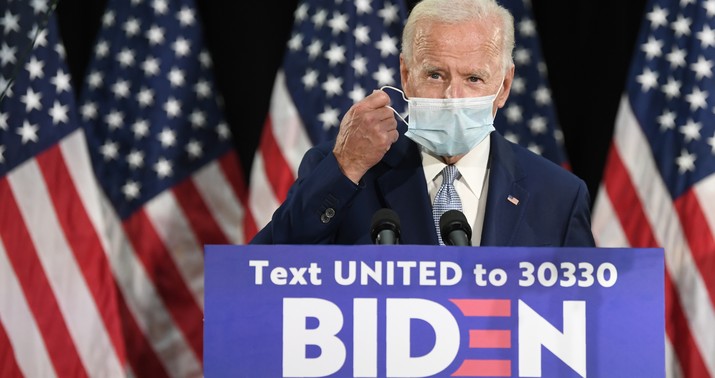 Bad legally, bad substantively — but maybe not so bad politically, especially if Trump engages on this issue.

“I would go back to making sure that everybody had masks, that you had PPE lined up, making sure we stockpile all the things that we need and we don’t have now. The one thing we do know, these masks make a gigantic difference. I would insist that everybody in public be wearing that mask. Anyone to reopen, it would have to make sure that they walked into a business that had masks.”

Rice: Couldn’t you use your federal leverage to mandate that?

Biden: Yes, I would from an executive standpoint, yes I would.

Rice: So you would, in effect, mandate the wearing of masks?

Biden: I would do everything possible to make it required the people had to wear masks in public.”

Bad legally: If there’s a constitutional argument that gives the feds the power to mandate mask-wearing, I’m unaware of it. Even under “anything goes” interpretations of the Commerce Clause, it’d be a stretch to justify non-economic intrastate public-hygiene activity like wearing masks as a subset of interstate commerce. (“B-b-but we can’t have interstate commerce if people are too sick to shop!” How many heavy-handed federal health mandates could be justified that way?) The Commerce Clause argument was stronger for mandating the purchase of a product like health insurance under ObamaCare — and remember that that argument failed in the Supreme Court. All five conservative justices deemed it unconstitutional; Roberts saved the day for Obama by treating the mandate as a tax instead.

We went through a variation of this argument awhile ago with Trump. Remember when he (briefly) claimed the power to lift state lockdown orders? Can’t do that, said conservative legal scholars. Police powers, such as the power to impose or rescind public-health orders, belong to the state. Same goes for Sleepy Joe and his federal mask mandate. At a minimum it should be Congress, not the president unilaterally via executive order, that acts to try to impose something like this. They could certainly pressure states to enact mask mandates locally by conditioning federal funding on it.

Bad substantively: You’d think someone like Biden who’s been in politics for 800 years would grasp by now that edicts from Washington, especially edicts issued by a Democratic-run government, are destined to promote a backlash among righties. And righties are the people who need to be persuaded here: They’re less likely than Democrats in polls to say that they wear masks, although for the moment even a majority of Republicans support mask-wearing in most polls that I’ve seen. A decree from a liberal president requiring mask-wearing would electrify the subject with partisanship, making defiance of the new pro-mask norm not just acceptable among righty populists but fashionably patriotic.

I wrote the other day about the wisdom of Mike DeWine in backing off a proposed mask mandate in Ohio. As wonderful as it’d be if everyone wore masks as a matter of very basic common sense, heavy-handed state action towards that goal will make some people chafe — which may lead to less mask-wearing overall. It’ll also (further) stupefy public discourse about the pandemic by bogging it down in arguments about whether the feds have the power to mandate masks, whether the Founding Fathers would have worn masks if George III had demanded it, yadda yadda, which would sidetrack the country from the simple task of getting more people to wear masks.

A President Biden should use any “soft power” he has to normalize and incentivize mask-wearing and, if necessary, do a little arm-twisting of governors behind the scenes to get them to issue mandates, which will be (somewhat) more acceptable to local skeptics since they wouldn’t be coming from the Washington leviathan.

Not-so-bad politically: The public broadly supports mask-wearing and many Americans are, ah, not sticklers about whether the Constitution grants the feds particular powers or not. Most voters will probably hear these comments from Biden and think, “Good, we need much more action from the White House to promote mask-wearing than Trump is giving us right now.” Trump could try to finesse that point by making the argument I made above — stressing that yes, mask-wearing is good, but we don’t want to mainstream the belief that the feds should enjoy unenumerated powers in an emergency. The problem is (a) Trump doesn’t do finesse, (b) it’s an open question whether he thinks mask-wearing is good, and (c) he’d be … perfectly comfortable with the idea that the president gets extra powers in times of crisis, I’m sure. If anything, his impulse towards drawing bright contrasts with whatever Democrats support might lead him into crude statements of opposition to mask-wearing generally (“MASKS ARE WEAK!”). That would be ruinous for him politically since the public is afraid of the virus, has accepted masks as a useful containment measure, and doesn’t think Trump’s handled the pandemic well so far according to the polling. Biden maneuvering Trump into taking the “anti” side in a debate over whether masks are good would be a master stroke.

Which, to be clear, isn’t what I think he’s doing here. He’s not playing five-dimensional chess by supporting a federal mask mandate. He’s just being who he is, an old liberal who thinks the power of the federal government is limitless. But it could pay off for him if Trump chooses to clash with him on the subject.