Oregon county: Everyone must wear masks — except people of color 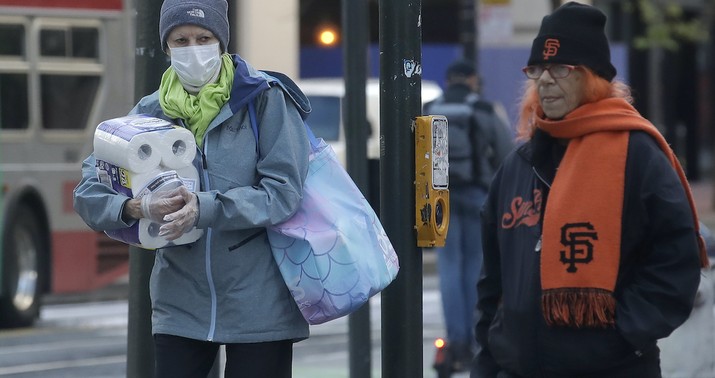 I’m surprised America’s many woke epidemiologists didn’t propose this idea a few weeks ago, when they were cheerleading gigantic mass gatherings of people protesting racism and police brutality.

If we’re going to have politically driven exceptions to basic pandemic precautions, why not have racially driven ones too?

It’s a good thing black Americans haven’t suffered disproportionately from COVID-19 or else this rule could be dangerous:

The rationale of public-health experts for exempting BLM protests from social distancing guidelines was that racism is a public-health issue, and evidently one that needed to be addressed more urgently than a once-in-a-century global pandemic. Well, racial profiling is a form of racism. So should black Americans take off their masks on grounds that it’s [checks notes] healthy?

I say no. It’s destined to backfire when some trigger-happy local cop ends up tasering a black resident because he was spreading germs by not wearing a mask.

No, no, just kidding. That won’t happen. As it turns out, the Oregon county that granted this exception for black residents is 90 percent white and less than one percent black. The new county order is basically just woke white people letting their need to virtue-signal steer them into truly terrible decisions, which seems to be quite common nowadays on America’s left coast.

Speaking of which, I have mixed feelings about this:

We cannot let COVID-19 spread like it is right now in Washington.

Universal mask-wearing is good. Legal compulsion, replete with misdemeanor charges for not wearing a mask, is dicey. I appreciate the goal but I think back to what Mike DeWine said earlier in the pandemic, when he briefly considered making masks mandatory and then dropped the idea. That wasn’t because he’d begun to doubt whether masks are effective; rather, he understood that many Americans dislike mandates and some Americans dislike them enough that they’ll flout them purely as an act of rebellion. And when they do, said DeWine, the public will lose focus on its core task of stopping the spread and get sidetracked by a tedious political debate over whether masks should be required or merely strongly recommended.

I’m curious to see the before-and-after data a month from now in Washington state after the new mask mandate has had time to work. What we’d want ideally instead of mandates are prominent spokesmen to encourage mask-wearing, folks whom most (but not all) of the public admires. Even better if a spokesman has attained some exalted status in an institution synonymous with courage masculine bravado, to convince people that there’s nothing “weak” about taking basic precautions against infection. Hey, how about…

Probably not for everyone, no