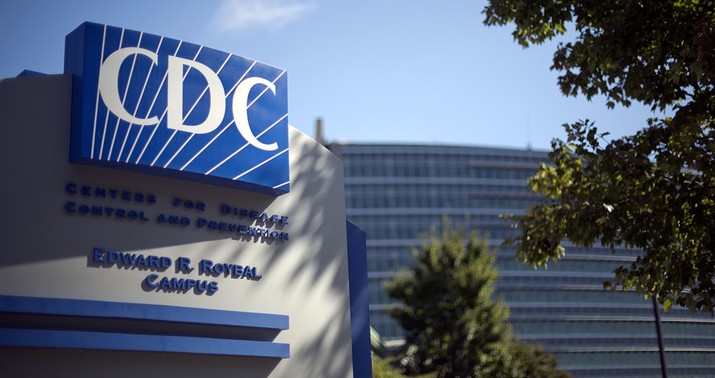 Let’s hope so. But let’s also remind ourselves that the CDC has distinguished itself during the pandemic in two ways. One was by catastrophically botching the design of the first COVID tests in February, at a moment when rapid testing could have contained the outbreak, because of amateurish errors like contamination in the lab. The second was calculating daily metrics like case counts and test counts by combining PCR (nose/throat) testing, which detects current infections, with antibody testing, which detects previous infections. Another weird, inexplicable, amateurish error from what’s supposed to be the world’s finest government agency in detecting and controlling infectious diseases.

Their performance to this point has been, to use a highly technical term, hot garbage. But if you want to bet on them this time, be my guest.

The key number is the one in the lower right-hand corner, signaling the best current estimate for the case fatality rate.

Is that possible? Well, on April 23, when Andrew Cuomo reported the first round of antibody testing results in New York, his team estimated that roughly 0.5 percent of those infected statewide had died. But note: That was the infection fatality ratio. The CDC is estimating the case fatality ratio, specifically the fatality ratio among people with confirmed cases who are symptomatic, which is just a subset of the total number of infections. If they’re getting 0.4 percent for that, it means the infection fatality ratio is even smaller — 0.26 percent to be exact, per Robert VerBruggen, who’s using the CDC’s estimate that 35 percent of infections are asymptomatic in order to estimate the total number of infections.

If you use the latest numbers from the COVID Tracking Project, America has recorded 94,352 deaths from 1,689,630 confirmed cases. That’s a case fatality ratio of … 5.6 percent. Li’l bit higher than 0.4 percent. Even if we guesstimated that the total number of infections in the U.S. is five times larger than the number of confirmed cases, i.e. that 80 percent of all infections are asymptomatic, that would still leave us with an infection fatality rate north of one percent. So how on earth is the CDC getting 0.4 percent?

There are other problems. VerBruggen:

For one thing, the virus has already killed 0.2 percent of all New Yorkers, and obviously a much higher percentage of those who’ve actually been infected in the city. For another, if we’ve had 100,000 deaths nationwide and a CFR of 0.4 percent, that means we’ve had 25 million symptomatic cases; including cases without symptoms, more than 10 percent of the entire country has been infected, which seems out of sync with what we’re hearing from serology tests.

He’s right about the numbers in New York, and that’s without counting thousands more “probable” COVID-19 deaths. For the CDC’s case fatality rate to be correct in NYC, literally half the population would have had to have been diagnosed with COVID-19 by this point. In reality, the last antibody estimate provided by Cuomo in early May estimated 19.9 percent have been infected. If you want to assume that that number has increased to 25 percent by now, after several more weeks of transmission (in a city that’s still limiting interactions via lockdown), it would mean an infection fatality rate of 0.8 percent, twice the CDC’s estimate. If you want to add in the 4,742 probable deaths that the City’s health department has calculated, the infection fatality rate would be one percent, just like the conventional wisdom says.

VerBruggen’s other point is sound too, estimating the total number of infections nationwide based on the number of deaths and the CDC’s case fatality rate. Are there anywhere near 25 million infections in the U.S.? I’d direct you back to this post from a few weeks ago, describing the results of antibody tests conducted on thousands of employees of Major League Baseball across the country. That sample isn’t perfectly representative of the U.S. population so we can’t rely too heavily on it as an estimate of all infections, but it was a *big* sample. Result: One percent were infected, not the 10 percent or so implied by the CDC’s number. Serology tests in even the hardest-hit European countries like Spain and France have found just five percent or so infected. The CDC’s estimate is implausible.

Where are they getting that 0.4 percent figure, anyway? How are they calculating it? Oddly enough, they won’t say. And scientists are suspicious:

Researchers also lambasted the CDC’s lack of transparency about its data sources. The eight-page document disclosed almost nothing about its numbers, citing only internal data and a preprint — a study that has not been peer-reviewed — led by scientists in Iran.

“This is terrible. This is way too optimistic,” Andrew Noymer, an associate professor of population health at the University of California at Irvine, told BuzzFeed News, adding, “With this document, the CDC is determined to smash its credibility with the public health community of which it is supposedly a leader.”…

Carl Bergstrom, an epidemiologist at the University of Washington, expressed concern that the CDC’s numbers will skew projections going forward because there will be some pressure to use the US government’s models.

“Given that these parameter sets underestimate fatality by a substantial margin compared to current scientific consensus, I see this as deeply problematic,” he said by email.

The more I think about it, the more this bothers me.

These numbers are so far outside of the scientific consensus that this strikes me as a devious and cynical effort to manipulate not only federal modeling but the broader scientific discourse.

If you’re looking for numerical ammo to support the argument that the risk from COVID-19 is wildly overstated for most of the population, skip the CDC and stick with Avik Roy, who highlights his latest piece with this arresting graph:

Fully 43 percent of American deaths from coronavirus have come from nursing homes, Roy notes — 0.62 percent of the population. That’s not the all-clear to go party, as plenty of people who get the disease and survive end up facing an ordeal in the hospital and possibly long-lasting disability afterward, but the fatality rate really should reckon somehow with the stark disparity between nursing homes and everyone else.