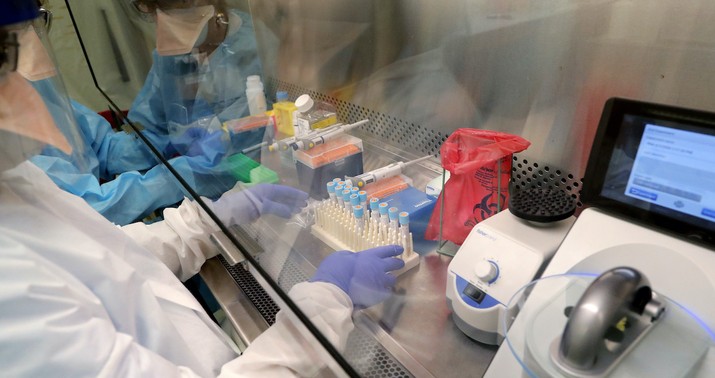 This is at least the third story in the last few weeks to suggest that patients who’ve had coronavirus and been “cured” don’t always enjoy immunity. First was the report from China about some patients testing negative after recuperating — and then testing positive on a follow-up test. Second was yesterday’s news of a Chinese study that found some people who’ve recovered from the disease had few antibodies in their blood afterward, suggesting that they might be vulnerable to reinfection.

Now there’s a study from South Korea that sounds a lot like the first story I mentioned, but with a new theory to explain what’s happening. As in China, some patients in Korea who seem to have beaten the disease are testing negative and then … positive. Leading doctors to wonder: Are some “cured” patients really not cured? If so, how many others spanning the world are walking around right now, believing they’re out of the woods when in fact they’re still infected?

And how many of them, in so doing, are inadvertently spreading the virus to others in the belief that they’re no longer contagious because they tested negative?

The coronavirus may be “reactivating” in people who have been cured of the illness, according to Korea’s Centers for Disease Control and Prevention.

About 51 patients classed as having been cured in South Korea have tested positive again, the CDC said in a briefing on Monday. Rather than being infected again, the virus may have been reactivated in these people, given they tested positive again shortly after being released from quarantine, said Jeong Eun-kyeong, director-general of the Korean CDC.

“While we are putting more weight on reactivation as the possible cause, we are conducting a comprehensive study on this,” Jeong said. “There have been many cases when a patient during treatment will test negative one day and positive another.”

One possible explanation is errors in testing. Maybe patients are seeing false negatives in their initial post-recuperation test only to receive a more accurate positive result in their second one. If that sounds familiar, remember that experts in the U.S. believe that as many as one in three COVID-19 tests here may be producing false negatives. One would think, though, that South Korean tests must be dependable in light of the fantastic success they’ve had in containing their outbreak. If they’re letting people out of quarantine due to a meaningful number of false negatives, we’d expect a wider outbreak there.

Then again, that’s why they do two post-recuperation tests. Two false negatives are much less likely than one. Another possibility: Maybe the nose and mouth, which are swabbed for the test, are cleared of the virus relatively early in the recovery process whereas other parts of the body remain infected a bit longer. Could it be that the remnants of the virus in the throat or lungs or wherever might “migrate” to the nose and mouth in some patients between the first and second test?

Any scenario here would be more hopeful than a “reactivating” virus.

While we’re on the subject of the strange ways in which the virus operates, the WSJ has a nice explainer about the “cytokine storms” it sometimes triggers. Some patients die not because COVID-19 directly attacks their tissue but because it triggers an immune response in the patient so intense that the resulting inflammation proves fatal.

The out-of-control immune response eventually causes the patients’ lungs to stop delivering oxygen to the rest of organs, leading to respiratory failure and in some cases death, the experts say. The malfunctioning immune system may be driving the rapid decline in lung function experienced by some patients, including younger and relatively healthy ones, after the initial onset of symptoms, doctors say…

In the most severe coronavirus patients, the disease appears to have two stages, doctors and researchers say. First the immune system fails to respond quickly or effectively enough to the virus. Then the immune response becomes too aggressive and floods the body with cytokines.

The surge of cytokines damages blood vessels and allows fluids to seep into the lungs, filling them up like water balloons, doctors say.

The key word there is “rapid.” A recurring theme in interviews with doctors and nurses over the last few weeks is the sheer speed with which some coronavirus patients go from normal-ish to critical. This new report from Reuters is especially vivid. “It’s insane how sick they get, how quickly,” said one nurse at Mt. Sinai in New York. Another said she was “paranoid, scared to walk out of their room” because they “look fine, feel fine, then you turn around and they’re unresponsive.” If it really is cytokine storms that are causing those sudden collapses then I wonder if it explains why — ta da — hydroxychloroquine might be beneficial in some cases. Hydroxychloroquine is an immunosuppressant, used by rheumatological patients to fight inflammation; if an overreacting immune system is what’s killing some people, logically an immunosuppressant to calm that system would make sense. The Journal story notes, in fact, that doctors are already testing other immunosuppressants as possible treatments. The *possible* efficacy of HCQ in small trials might prove in time to have been an early clue as to why COVID-19 is so lethal.

In lieu of an exit question, here’s a doctor in New York discussing yet another strange quirk of the virus. He was quoted in the Stat article I highlighted last night about doctors possibly overusing ventilators for treatment. My COVID-19 patients aren’t suffering from lung failure, he says, they’re suffering from something that looks more like altitude sickness. So why are we forcing them to let a machine breathe for them, knowing that the ventilator might itself damage their lungs?