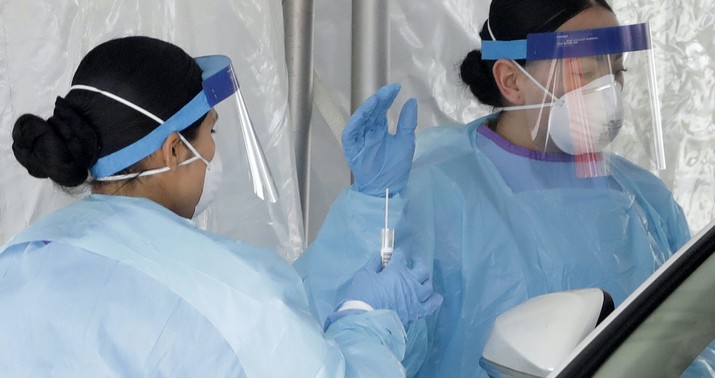 False positives are bad, but the damage from a false positive is minimal. You’re told that you have the disease even though you don’t, so you quarantine yourself. Two or three weeks later, you reemerge. That’s costly in terms of productivity but you’re not spreading any viruses that way.

A false negative, where you’re told that you don’t have the disease even though you do, is a different matter. The Wall Street Journal cites a specific case in this story of a mom in Texas who came down with a fever and cough, isolated herself in the family home, then tested negative. So she began mixing with her family again. Now her daughter has aches and fatigue. Is that COVID-19 or something more mundane, like the flu?

Every plan circulating right now for reopening the country after this first epidemic wave passes makes widespread reliable testing its key prerequisite. We put out the fire (mostly) now, then we go back to work in the expectation that any new emerging hot spots will be quickly identified by easily accessible tests and contained.

But what if the tests aren’t reliable?

The sensitivity of the currently available coronavirus tests seems to be lower than other similar tests, said Mike Lozano, a Tampa, Fla.,-based executive at Envision Healthcare Corp., a medical group that contracts to provide care at hospitals. Dr. Lozano said he estimates that the sensitivity of the tests is in the neighborhood of 70%, meaning nearly one in three positive patients walks away with a reassuring negative result.

Chris Smalley, a primary-care doctor at Louisville, Ky.,-based Norton Healthcare, said the 70% estimate was gaining traction with doctors finding out how well the tests work in the real world, absent better data. He said several of his patients with negative tests went on to develop highly suspicious coronavirus symptoms and require long hospital stays…

A February study of about 1,000 patients in Wuhan, China, who were hospitalized with suspected coronavirus there, where the pandemic began, found that about 60% tested positive using lab tests similar to those available in the U.S. But, almost 90% showed tell-tale signs of the virus in CT scans of their chests, the article, published in the journal Radiology, found, suggesting many patients in the group were testing negative despite active coronavirus infections.

In reality, says the Journal, there may be even more false negatives floating around than those percentages indicate. Because testing implements like swabs are in short supply, doctors tend not to double-check people who have already tested negative even if they’re still presenting telltale symptoms later. Note the detail about China having this problem too. Does this explain why some recovering patients there are testing negative — and then positive? That seemed like another case of China trying to fudge its numbers but maybe the explanation is simpler. Maybe they can’t design a truly reliable test either.

The FDA’s in a Catch-22. The reason it allowed states and labs to devise their own tests in the first place is because the CDC’s initial stab at testing produced false positives. The country faced a critical shortage of tests as the disease began to spread; the FDA concluded that ramping up quickly was more important than quality control. What do they do now? Is 70 percent accuracy in 100,000 daily tests better than, say, 95 percent accuracy in 25,000 tests as the bugs are worked out in the others?

A professor of medicine wrote yesterday that false negatives “seem to be uncomfortably common” from what he’s hearing from colleagues:

Increasingly, and disturbingly, I hear a growing number of anecdotal stories from my fellow doctors of patients testing negative for coronavirus and then testing positive — or people who are almost certainly infected who are testing negative.

His advice: If you have symptoms, assume you’re positive and act accordingly. I’m glad we went through a month of angst about our testing shortfall to arrive at that grim conclusion.

It’s maddening how we can’t seem to rise to the occasion technologically to reckon with this disease in a basic way. We can’t test, then we can test but we can’t find enough swabs to do the tests, then we do some tests and the results aren’t very accurate. This stuff isn’t easy, I know: It’s a novel virus, it’s insidious because of asymptomatic transmission, we can’t expect scientists to work miracles overnight. But we don’t have much time. The point of the national shutdown we’re enduring, with all of its attendant economic carnage, is to get testing capacity to a point of sufficient comprehensiveness that it’s safe-ish for people to start doing business again. How much longer until we have that capacity with reliable tests?

Are we headed here for a situation in which the economy reopens and, instead of testing people aggressively, we simply tell everyone to wear a mask at all times outside the home and to assume they have coronavirus if they show *any* symptoms? If you wake up with a cough, you’re out of commission for two weeks whether your boss likes it or not. A lot of productivity among people who aren’t actually infected will be lost that way, but what’s the alternative? Have a cough, get tested, receive a false negative, then infect your entire work force?

If these numbers from Iceland are true of populations everywhere, it might actually be a waste to use tests on people who are already showing symptoms. You want to slow the spread? Then focus on people who don’t seem sick. Because there are a lot of them out there:

Although fewer than 1% of the tests came back positive for the virus, the company’s founder Dr. Kári Stefánsson told CNN that around 50% of those who tested positive said they were asymptomatic, confirming multiple studies that show that asymptomatic, or mildly symptomatic, people have played an important role in spreading the virus.

“What it means in my mind, is that because we are screening the general population, we are catching people early in the infection before they start showing symptoms,” Stefánsson said.

Iceland is testing people randomly (via volunteers), not just those who show up at the doctor’s office with symptoms. They haven’t locked down (yet) because they’re able to identify some asymptomatic carriers and have those people quarantine before they spread the disease, exactly the sort of system we’re hoping to transition to. How do we do that with tests that are 70 percent accurate?

Inaccuracy in testing will mean more economic wreckage once we reopen for business as the public grows to distrust test results. The more people feel they can’t believe that those around them out in public truly aren’t sick, the less willing they’ll be to go out in public themselves. Why go to a restaurant and chance being seated near a table at which one person has a persistent cough but recently tested negative for coronavirus? Stay home. There’s no way to know who’s a carrier. Even scientists can’t reliably tell you.

Speaking of testing, apparently there’s a debate within the White House over where those newfangled tests from Abbott should be sent, to northeastern hot spots for use by first responders or to rural and southern areas. The Abbott tests promise results within five to 15 minutes, which is wonderful, but (a) who knows if their accuracy rate is any better and (b) as I understand it, the machine only tests one patient’s sample at a time. That means a machine running nonstop for 12 hours will process only 50 people or so, unlike the mass testing done at public and private labs. Even so, it’s excellent that a patient who fears he’s infected can be told immediately if he’s correct since that’ll encourage him to quarantine more quickly. Apparently it’ll be rural and southern areas that benefit: Mike Pence’s task force wants the Abbott tests to go there, not to the current hot spots, because our knowledge of the extent of the outbreak is weaker in rural areas right now.