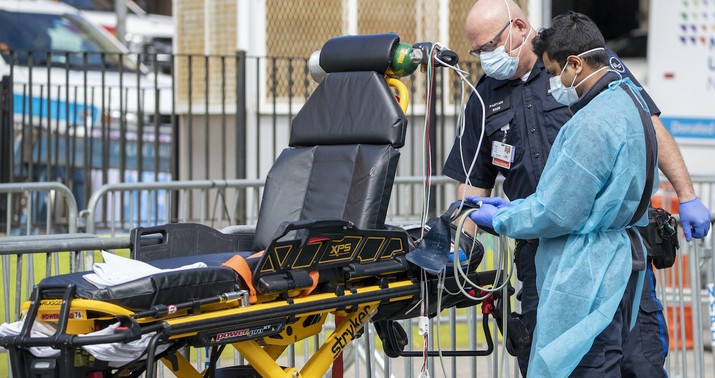 One way to ease a shortage is to increase supply. That’s what the feds are doing right now in contracting with companies to build thousands of new ventilators, however belatedly.

The other way to do it is to reduce demand. Which seems ludicrous at a moment like this, when the country has tens of thousands of patients sick with COVID-19 descending on hospitals.

But stop what you’re doing and read this fascinating piece at Stat about what ER doctors are discovering in treating victims of coronavirus. It’s long but worth every minute, especially the eerie detail about patients showing up at the hospital with blood oxygen levels so low that they’re, er, not supposed to be alive. Or, at best, barely alive — and yet many patients show up not just alive but reasonably okay. Sick, of course, but not at death’s door. They’re responsive. They’re not gasping.

There have been reports lately on the wires that, for all the hype about ventilators as last hope of coronavirus patients, the people who are placed on them fare terribly. An Italian doctor claimed that only 20 percent of patients he saw who were subjected to them recovered. A small study in Wuhan had a success rate of three in 22. “It’s very concerning to see how many patients who require ventilation do not make it out of the hospital,” said one Missouri doctor to NPR. The explanation for the poor success rate seemed obvious: If you’re sick enough with COVID to require artificial respiration, you’re very far gone. Chances are you’re not coming back from the brink, ventilator or no ventilator.

The Stat article raises a new possibility with major repercussions, though. What if the ventilators are making things worse? Normally when a patient has a freakishly low blood oxygen level, it means their lungs are failing and they need a machine urgently to breathe for them. With some coronavirus patients, though, the lungs aren’t failing. They’re absorbing less oxygen — but they’re still successfully removing most carbon dioxide, avoiding a critical situation. Their condition is more akin to altitude sickness, says Stat, than to pneumonia. When a patient’s lungs are functioning reasonably well, you don’t want to intubate them and put them on a machine. The machine can do damage of its own, especially among older patients:

In acute respiratory distress syndrome, which results from immune cells ravaging the lungs and kills many Covid-19 patients, the air sacs of the lungs become filled with a gummy yellow fluid. “That limits oxygen transfer from the lungs to the blood even when a machine pumps in oxygen,” Gillick said.

As patients go downhill, protocols developed for other respiratory conditions call for increasing the force with which a ventilator delivers oxygen, the amount of oxygen, or the rate of delivery, she explained. But if oxygen can’t cross into the blood from the lungs in the first place, those measures, especially greater force, may prove harmful. High levels of oxygen impair the lung’s air sacs, while high pressure to force in more oxygen damages the lungs.

In a letter last week in the American Journal of Respiratory and Critical Care Medicine, researchers in Germany and Italy said their Covid-19 patients were unlike any others with acute respiratory distress. Their lungs are relatively elastic (“compliant”), a sign of health “in sharp contrast to expectations for severe ARDS.” Their low blood oxygen might result from things that ventilators don’t fix. Such patients need “the lowest possible [air pressure] and gentle ventilation,” they said, arguing against increasing the pressure even if blood oxygen levels remain low. “We need to be patient.”…

Because U.S. data on treating Covid-19 patients are nearly nonexistent, health care workers are flying blind when it comes to caring for such confounding patients. But anecdotally, Weingart said, “we’ve had a number of people who improved and got off CPAP or high flow [nasal cannulas] who would have been tubed 100 out of 100 times in the past.” What he calls “this knee-jerk response” of putting people on ventilators if their blood oxygen levels remain low with noninvasive devices “is really bad. … I think these patients do much, much worse on the ventilator.”

Older patients who are sedated and intubated for days on end can have cognitive problems or respiratory dysfunction afterward. Doctors are willing to risk that because they’re trained to respond to alarmingly low blood oxygen with aggressive artificial respiration. But now COVID-19 is making them rethink that playbook. “This may be an entirely new disease,” said one doctor in New York. “The patients in front of me are unlike any I’ve ever seen.” A new study in China experimented with less invasive measures like a BiPAP machine (similar to what people with sleep apnea use at night) or even a nasal cannula (a thin hose that delivers oxygen into the nostrils). Their patients’ blood oxygen “significantly improved” after an hour or two and both measures were deemed safe as a first course of treatment in lieu of a ventilator.

That’s not to suggest that every patient is a candidate for less aggressive respiration. Cases involving actual lung failure are presumably a different ballgame, and Stat doesn’t offer any numbers suggesting what the percentages might be. How many COVID-19 patients have zombie-ish blood oxygen levels but are otherwise functional and how many truly are at death’s door and need a ventilator? That’ll tell us how dire our ventilator shortage actually is. And maybe also give us a sense of how many patients are succumbing in part to unnecessary ventilation wrecking their otherwise stable lungs.

It’d be better to know that sooner rather than later too, as the virus is beginning to take a bite out of rural America and hospitals there are worried they don’t have enough ventilators to meet the load. They need some — but maybe not as many as they think. If nothing else, easing off of ventilators might spare some medical workers from having to take crash courses in operating the machines on top of everything else they need to do right now. And it’d let the feds focus on other urgent shortfalls, starting with personal protective equipment. The national stockpile is now completely depleted.

In fact, that may be the main obstacle to switching patients from ventilators to less invasive breathing apparatuses. Stat notes that devices like CPAP machines push aspirated particles into the air continuously, making it risky for doctors and nurses to enter the room. Ventilators don’t do that once the patient is intubated. If we want to solve the ventilator shortage, we might need to solve the mask shortage first.