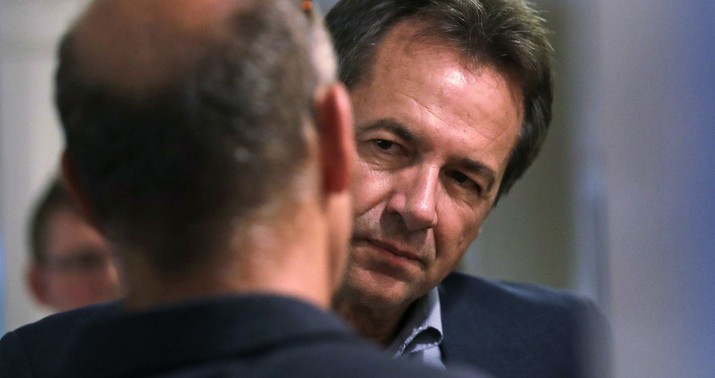 Hard not to notice the timing here.

Democrats have been after Bullock for many months to challenge Republican Steve Daines for Senate this fall as his term as governor winds down. Montana is a red state, a heavy lift for them — but doable. Jon Tester’s won three Senate terms there since 2006, after all. The asterisk in Tester’s case is that he’s had the good luck to come up for reelection in three Democratic wave years. There was the 2006 election in which Dems took back the House amid public anger over Iraq and Hurricane Katrina. There was the 2012 election when Obama swept to a second term. And there was the 2018 election in which a backlash to Trump propelled Democrats to a new House majority. Tester’s survived three election near-death experiences, winning each Senate race by no more than four points. This year, with Trump at the top of the ballot, the task for his party is daunting. Nothing less than a top-tier candidate will give them even an outside chance at Daines’s seat. Bullock is the only top-tier Democrat there.

They grumbled when he decided to run for president last year, barely registering in the polls before quietly dropping out. He was asked repeatedly about the Senate seat and insisted that having to commute between Montana and D.C. would be too disruptive to his family. His family is now onboard, says the NYT in a new story today Bullock’s likely entrance into the race. Is that what finally convinced him to run? Or … was it maybe the fact that Bullock would be understandably reluctant to waste his time running in Montana with socialist Bernie Sanders on the ticket and now, suddenly, as of last night, he no longer has to worry much about that?

Is this, in other words, a payoff for Democrats from Joementum?

After months of insisting he would not challenge Senator Steve Daines, Mr. Bullock, who ran for president last year, has told Democrats in the last week he is now inclined to run in what would immediately become one of the marquee Senate races of 2020. Mr. Bullock has only a few days to finalize his decision: the filing deadline to run in Montana is Monday…

Senator Chuck Schumer of New York, the minority leader, flew to visit him in Montana last month. And when Mr. Bullock was in Washington last month for the meeting of the National Governors Association, he also met with former President Barack Obama, as was reported by Politico.

More quietly, a handful of union officials have reached out to Mr. Bullock to assure him he would have all the resources he needs in a state that still retains a strong labor tradition, according to one of the party officials, who was familiar with the conversations.

Ah, so that would explain this previously mysterious Trump tweet earlier today applauding Daines. Trump must have heard about Bullock’s decision and decided there was no time to waste in promoting the Republican.

The great people of Montana can have no better VOICE than Senator @SteveDaines. He is doing an incredible job! Whoever the Democrat nominee may be, please understand that I will be working hard with Steve all the way, & last night I was 20 for 20 (per @GOPLeader). WE NEED STEVE!

Daines won his Senate seat by nearly 18 points in 2014. Bullock, a Democrat, had to fight tooth and nail for his two wins as governor in a Republican state, winning by a point and a half in 2012 and then by four in 2016. He’s popular in Montana, though, scoring a 52/31 approval rating. (Daines’s rating is similar at 47/31.) Daines will be heavily favored with Trump at the top of the ballot, but having Biden instead of Bernie at the top on the Democratic side should reduce Daines’s margins. And of course he’ll be vulnerable if Trump runs into some sort of trouble between now and November that makes Biden a favorite to win. Economic downturn, coronavirus outbreak, some international trouble abroad — a no-name Democrat might not be able to beat Daines even with all of that working in his favor but Steve Bullock could pull a Tester and win. That’s why Schumer and other Dems wanted him so badly. Not because he’s likely to win if Trump looks strong-ish this fall but because he might be the only Democrat in the state who can flip the seat if Trump doesn’t.

Why should you care about any of this? Because Senate Dems are on a “drive for five” in this fall’s elections. Right now they’re hoping/expecting that the only Democrat-held seat that’ll flip to Republicans is Doug Jones’s in Alabama. The GOP currently enjoys a 53/47 advantage; gaining Jones’s seat will momentarily make it 54/46, forcing Democrats to flip no fewer than five seats to create a 51/49 majority for Schumer. And here’s the thing: They have a not insignificant chance of doing it now that Bullock’s in the race in Montana. It’s unlikely, especially if Trump’s numbers don’t weaken between now and November. But check the map:

Arizona is a toss-up. Martha McSally trailed Mark Kelly by four in a poll taken in January.

Maine is a toss-up too, with Susan Collins trailing her challenger by a point in the latest poll. Trump lost statewide in 2016.

North Carolina is also a toss-up. Two polls taken last month showed Thom Tillis winning by two points in one … and trailing challenger Cal Cunningham by five in another. Republicans are sufficiently worried that they went about promoting a far-left challenger in Cunningham’s primary last night, hoping she might upset him and give Tillis an easier race. Cunningham won by 22 points.

Colorado may be a toss-up at best. It’s trending blue after Hillary won it in 2016 and Democratic challenger John Hickenlooper is a former governor, like Bullock. He led Cory Gardner by double digits in a poll taken last summer.

That’s four. Bullock’s entry in Montana makes five. Montana’s not a toss-up — Daines will be favored — but the Senate is now ripe to flip if Republican fortunes sour a little before Election Day. Even if Bullock can’t come through for them, the growing possibility of Biden being nominated and winning the presidency gives Schumer a bit of extra insurance: If Joe wins and Dems take AZ, ME, NC, and CO, it’ll be a 50/50 Senate with a Democratic president. That’s enough for a majority with VP Kamala Harris or Stacey Abrams casting the tiebreaking vote.

Here’s one of Daines’s presidential ads last year. Montanans might be seeing it again this fall courtesy of Daines’s attack-ad team.

“It is most accurate at this time to describe what is happening there as “protests”–not riots.”

This Tweet Spells the Death Knell of the Lockdowns

Hennepin County Attorney: There Might Not Be a Criminal Charge Here

OOF! Sally 'Hands Up Don't Shoot' Kohn comparing Minneapolis riots to Michigan protest does NOT go well for her, like at all

Grenell vs Swalwell: The Twitter slapfight you didn’t know you needed

“I’m talking about how you lied to the American people over and over again.”

Walz “deeply apologizes” to CNN. How about to Minnesotans?

“We have not heard from city leadership nor have we heard from Governor Walz about tamping down this violence.”

Oh, my. How times have changed

She’s above her own stay at home order, you know.

County DA: There’s other evidence that does not support a criminal charge against the cop in the George Floyd case

“I’d have to go through a legal process.”

Nikole Hannah Jones on violence and the ‘uprising’ in Minneapolis

“The Civil Rights Movement was *not* non-violent.”

One party sparked a cluster of infections.

“All the authorities seem frozen.”