Scientist: Genetic analysis suggests coronavirus has been spreading in Washington state for weeks 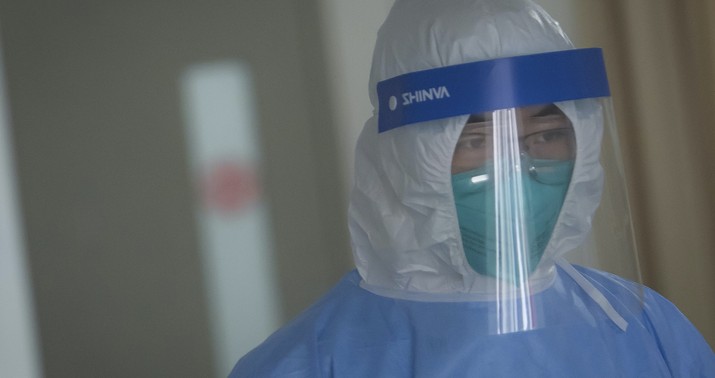 Not a surprise given the news yesterday that one person there has died of the disease and two more, a teenager and a woman in her 50s, are presumptive positives. A fourth man from Washington was diagnosed with COVID-19 in January after traveling in China near Wuhan; he’s now completely recovered, but God only knows how many people he may have infected at the Seattle airport or elsewhere in the community before he was diagnosed.

Flu researchers in Seattle sequenced the genome of the strain of coronavirus in the man who died and compared it to the strain in the man who was diagnosed in January. Were they distinct? Or were they related, which would be circumstantial evidence that the strain had spread through the community via patient one en route to patient two?

They’re related, per a local scientist:

This strongly suggests that there has been cryptic transmission in Washington State for the past 6 weeks. 3/9

I'd assess the p-value for this coincidence at 2/59=0.03 and so is statistically significant. Additionally, these two cases are geographically proximal, both residing in Snohomish County. 5/9

His best guess is that there are “a few hundred current infections” locally. Another researcher who models disease told the Times that he’d expect anywhere from 150 to 1,500 people to “have either been infected and recovered or currently are infected now.” One thing I’m keen to know but haven’t seen in any of the reporting about this today is whether there’s been an uptick in hospitalizations lately in Seattle and/or Snohomish County for respiratory illness. Are people coming in with COVID-19 and being mistakenly diagnosed with the flu or pneumonia?

And if there *isn’t* an uptick (yet), what conclusion should we draw from that? Note what the researcher said, that some Washingtonians may have been infected and recovered already, all on their own without medical assistance. An ER doctor in Massachusetts made the case in Slate yesterday that undetected community spread of coronavirus contains a major silver lining: It suggests that many cases of the disease just aren’t serious enough to warrant a doctor’s care, which means the death rate may be a lot lower than we think.

In China, the death rate has been reported as zero in children under 10 and very low, 0.2 percent, in healthy adults. Unfortunately, the rate is far higher, as high as 14.8 percent, in the sick and elderly (though as is always the case in outbreaks like this, it is hard to know how many of these older and often chronically ill hospitalized patients died with COVID-19, not of COVID-19). The reported overall death rate of 2 percent is essentially a weighted average of these numbers.

So what does the case of a young and otherwise healthy patient contracting the disease despite no obvious exposure to a contagious source patient imply? That there are likely many asymptomatic cases in our communities already. Asymptomatic transmission has already been reported in China. In the first reported case, the source patient transmitted the infection to others but never became sick herself.

If this turns out to be common, it’s a good thing. It implies that the case fatality rate—the number of deaths divided by the number of infections—of this novel coronavirus is likely to be far, far lower than the reported statistics.

If, hypothetically, 500 people in Washington have contracted the disease and only a handful have been sick enough to need care and only one has been sick enough to die from it, then we may be looking at a death rate of something like 0.2%, in line with the good ol’ flu. That’s the “good news.” The bad news is that lots of asymptomatic carriers obviously means the virus can spread quickly, and anything that spreads far enough will earn a large body count even with a low death rate. There may be many thousands of children in China who’ve contracted the disease and whose healthy young immune systems have successfully nuked it, but not before passing it along to mom and dad. Or, worse, to grandma and grandpa, for whom the death rate is much higher.

Which brings us to the other ominous coronavirus news out of Washington state yesterday:

Washington state reported on Saturday the first death in the U.S. from the new coronavirus, the first health care worker to be infected with the disease, and most worrying, the first known outbreak in a long-term care facility.

At a nursing facility in Kirkland, Wash, approximately 27 of the 108 residents and 25 of the 180 staff have some symptoms, health officials said during a teleconference with the Centers for Disease Control and Prevention. Authorities report that some among them have pneumonia.

An outbreak at a facility for senior citizens or the chronically ill would be the worst-case scenario for small-scale spread. Stay tuned on that. In the meantime, a professor of health policy offered a helpful reminder on Twitter this morning that we should expect to see a huge “jump” in U.S. coronavirus diagnoses soon. That’s not because the disease suddenly began spreading rapidly overnight. Rather, it’s because we’re about to start ramping up more effective testing for it in patients and will no doubt detect many cases that have already been there for days or weeks.

I will repeat this, but really important: cases coming out of the US WILL EXPLODE in the coming days. This is NOT a cause for panic. These EXISTING cases are finally being diagnosed, since testing is now more broadly available. 1/

"..Efficient detection" is incredibly important. If we err on the side of any inefficiency, it should be that we over-test until we learn more. We may find ourselves "overusing" Chest Computed Tomography as a critical adjunct. @radiology_rsna 7/ https://t.co/JfvaI9oTaU pic.twitter.com/iwlckOybln

No doubt coronavirus is spreading and will continue to do so short-term, but the thing that’s about to grow “explosively” isn’t the disease, it’s our ability to detect it. Right now, thanks to the CDC’s screw-up in testing, it’s as if we’re at the eye doctor’s office and can only read the giant “E” at the top of the chart. We can’t decipher the smaller letters — but of course we know they’re there. Headlines this week claiming that there’s been a huge “jump” in the number of U.S. cases will be akin to saying that there’s been a “jump” in the number of letters on the eye chart just because they’re legible now thanks to our new lenses.

Here’s former FDA commissioner Scott Gottlieb reiterating this morning on “Face the Nation” that there’s already an iceberg here of some as yet undetermined size and we’ve only seen the tip of it thus far. Exit question: Is it a coincidence that reports of new cases in the U.S. this week were mostly clustered on the west coast? Washington had a couple, Oregon has a patient now, and there are a few in the northern half of California. Maybe that’s a simple function of (relative) geographic proximity to Asia, with travelers returning from China landing in airports on the west coast. But I’m eager to see if there’s any genetic similarity between the cases in the three states. If there is, that would mean much wider community spread than we suspect.

#CORONAVIRUS in the USA: There could be “hundreds or low thousands” of cases of the novel #coronavirus, former FDA commissioner @ScottGottliebMD tells @margbrennan. pic.twitter.com/gJWMyEYQRx