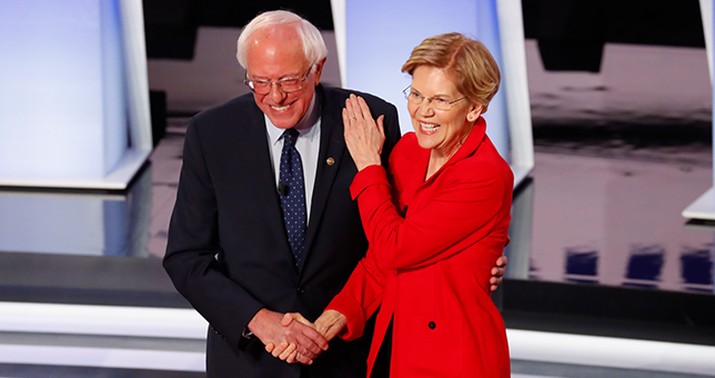 Live at 9 p.m. ET on CNN. A month ago it looked like the central suspense of this debate would be whether Pete Buttigieg could build on his surge in Iowa and lock the state down with a command performance.

A month later the central suspense is whether a progressive civil war is going to break out onstage before our eyes.

Elizabeth Warren’s claim that Bernie Sanders once told her that a woman nominee can’t defeat Trump is obviously the elephant (donkey?) in the room tonight. The question is who acknowledges it first, the moderators, Bernie, or Warren herself. Sanders doesn’t want to talk about it for obvious reasons and Warren doesn’t want to look any more aggressive than she needs to. Berniebros are already furious that she’d accuse him of sexism on the eve of the first big vote; if she takes it upon herself to force the subject in order to put him on the spot, it’ll make her look that much more cutthroat.

Besides, the whole point of leaking the conversation between Sanders and Warren to CNN yesterday was to tee up the debate moderators to ask about it, no? Now that the left is in an uproar about it, the topic must be raised. Quite possibly as the very first question of the night, which will set the mood for the two hours that follow. My guess is that both Sanders and Warren will be conciliatory about it, with Bernie claiming that he doesn’t remember saying that a woman can’t win but allowing that he thinks a woman opponent will face special nastiness from Trump and Warren claiming that Bernie did say it but that he meant it as a criticism of the president, not to discourage her. Then they’ll each say something about supporting whoever the eventual nominee is, how the left must remain united, blah blah.

The more interesting question is whether either Warren or the moderators will remind the audience that Team Bernie allegedly threw the first punch by telling its volunteers to question Warren’s electability while canvassing for him. That may have convinced Team Warren to go negative on him by leaking their private conversation about woman candidates. Bernie’s volunteers allegedly told people that Warren won’t motivate casual voters to register and turn out the way Sanders, the grassroots favorite, will; maybe that critique reminded Warren of the earlier reason he once gave her privately to question her electability. She needs to not come off as the bad guy tonight. Emphasizing that the Sanders campaign started this is one way to do that.

The Sanders/Warren tension should be brief, not just because the elephant in the room is a delicate subject for both of them but because some lefties don’t want to see the movement divided and will resent whichever candidate appears more willing to let that happen. Besides, they have a common enemy tonight. That would be the new frontrunner in Iowa and New Hampshire, Joe Biden, whose … troubled foreign-policy record will be litigated thanks to the rising possibility of war with Iran. “I think he’s been wrong on nearly every major foreign policy and national security issue over the past four decades,” wrote former SecDef Robert Gates in his memoir about Biden a few years back, not incorrectly. And yet:

2020 Democratic White House hopefuls have drilled into foreign policy as U.S. tensions with Iran bubble, and a new poll suggests more primary voters put their faith in Joe Biden to navigate the crisis.

About a third, or 32%, of Democratic primary voters most trust the former vice president to handle foreign relations, according to a Morning Consult survey released Monday night. Another 20% of respondents have the most confidence in Sen. Bernie Sanders, I-Vt., to address the topic.

The more nervous Democratic voters get about international relations, the more apt they may be to turn to the guy with 50 years’ experience in government on the incorrect assumption that he must have learned something from being around the issues for so long. Sanders and Warren are out to correct that assumption tonight, starting of course with Biden’s vote for war with Iraq in 2002. Biden’s pal, John Kerry, has been trying to pre-spin that for him to unpersuasive effect:

“The fact is that we were promised by a president, by an administration, that they were going to do it as a last resort after exhausting diplomacy, that if they have to go to war it would be with a coalition that they built broadly, and that they would do it only in conjunction with our allies,” Kerry said Friday. “It didn’t have to happen; it was a war of choice.”

“It was a mistake to have trusted them, I guess, and we paid a high price for it,” Kerry added. “But that was not voting for the war.”

Looking forward to Biden claiming that he didn’t really vote for war when he voted for war. Meanwhile, he needs to figure out a way to impugn Sanders’s own foreign-policy judgment that doesn’t involve calling him too dovish, as that would be an unfortunate critique at a moment when the Democratic Party has mobilized behind trying to limit Trump’s authority to wage war on Iran. Does Joe dare try to accuse America’s favorite socialist of being too hawkish himself? NBC remembered this detail from Bernie’s past today:

He also voted repeatedly for a U.S. policy of regime change in Iraq, including when he backed the Iraq Liberation Act in October 1998 and again when President Bill Clinton launched airstrikes a few months later, as pointed to by a Democrat familiar with Sanders’ record.

“Saddam Hussein is a brutal dictator who should be overthrown, and his ability to make weapons of destruction must be eliminated,” Sanders said on the House floor, even as he expressed reservations about civilian casualties and the efficacy of the brief military campaign.

I don’t know if “the far-leftist is too warlike” will fly, particularly in light of Biden’s own record. Something to watch for is how much the candidates bicker over their reactions to the Soleimani strike and the aftermath, as Biden took some heat from progressives for his tactful but muted response to Iran’s missile attack last Tuesday night. Real liberals were supposed to seize that moment to immediately start shouting from the rooftops that Trump wants war and must be stopped. Biden declined. How can he call himself a real liberal?

Here’s your thread to comment. While we wait, enjoy “The View” going off on Bernie for allegedly telling Warren that a woman can’t beat Trump.