Joementum? Biden now leading in all four early states in the RCP poll of polls 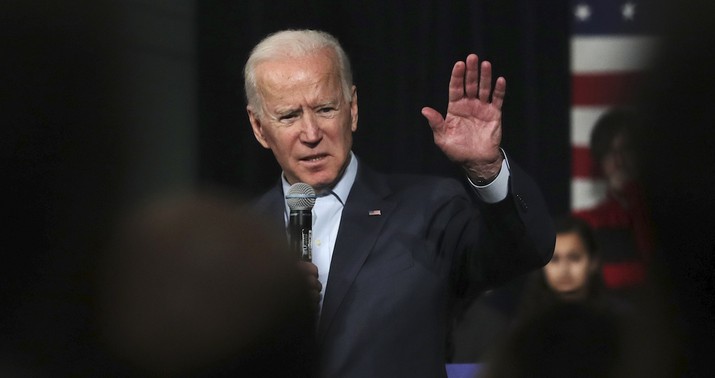 He got a pair of good polls today, which is noteworthy, but even more noteworthy is the effect that those two had on the RCP average tracking all polling.

For all the hype about the Warren surge in October and the Buttigieg surge in November and the Bernie surge in December, ol’ Joe not only remains in the thick of things in Iowa, New Hampshire, Nevada, and South Carolina but he’s actually now the leader in all four states. Since entering the race early last year, he’s spent exactly one day out of first place in the RCP national average.

Looking at the table below reminds me a bit of the state of polling during the final week of the 2016 election. Trump had fallen badly behind Clinton in mid-October amid the “Access Hollywood” fallout. But then undecideds began deciding, and that big lead began to shrink. And by the evening before the vote, most of the key states were toss-ups.

Is that what we’re seeing now? Undecideds finally being forced to choose among four flawed candidates and opting to stick with the name brand, the “electable” candidate?

Two caveats there. One is that there’s been only one poll of Nevada since November, which means the “average” in this case really only amounts to a single survey. Not so reliable. The second, obviously, is that his leads in Iowa and New Hampshire are whisker-thin. They barely even count as leads. It’s more that the two states are jump balls at the moment, although given all the media hype lately about Berniementum you might not expect Biden to be poised to win either, let alone both.

As I said, his numbers in the average are being boosted by a couple of individual polls that have him ahead of the pack. One comes from Iowa via Monmouth, which has Grandpa Joe out to a surprising six-point lead:

The trendline there shows a Biden vs. Bernie showdown developing, although the other major poll of Iowa taken recently (by the Des Moines Register) actually had Biden in fourth at 15 percent, five points behind the leader Sanders. Hmmm.

The poll, released Monday, has Joe Biden in first place at 26%, followed by Bernie Sanders at 22% and Warren at 18%. Pete Buttigieg attracts 7% and late entrant Michael Bloomberg 4%…

The poll results represent a significant change from a poll in October that showed Warren (25%) and Biden (24%) in a statistical dead heat. But Warren was also polling much higher nationally at that point.

Starting in late October Biden sank steadily in New Hampshire polling, dropping from an average of 24.0 percent to 13.7 in early December. But he began to rebound around Christmas and in the last four polls of the state he’s either led or been within two points of the lead. What explains that? He was better than usual at the last debate, sure, but my guess is that Dem voters are starting to pay attention to the race in earnest now and maybe beginning to slide towards the guy they recognize in lieu of the too left/too young alternatives. I’ve seen comparisons lately between Biden’s run this year and Romney’s run in 2012, when Republican primary voters sent various opponents to the top of the polls in the run-up to the primaries before finally deciding to stick with the “safe” choice. It’s a good analogy, although I think there’s an element of the 2008 McCain primary victory too in which Republicans seemed generally unable to decide for months and in the end just opted for the guy whom they knew best.

Needless to say, if Biden wins Iowa and New Hampshire, the race is all but over.

Still, don’t count out Warren. Bernie could win both states, of course, as he nearly did in 2016, but I notice that Warren is the clear leader at 23 percent in Monmouth’s Iowa poll when voters are asked who their second choice is. She’s regained some ground in New Hampshire polling lately too. I continue to wonder, as I said earlier, if she’ll end up as a goldilocks option for some Dems who want a real liberal as nominee but are skittish about going nuclear by nominating a loud-and-proud socialist. If you think Biden’s too squishy (and old), Bernie’s too red (and old), and Mayor Pete’s too green (and young), your choice is obvious.