Report: Deval Patrick tells Dems he’s running. Did Obama encourage him to do it? 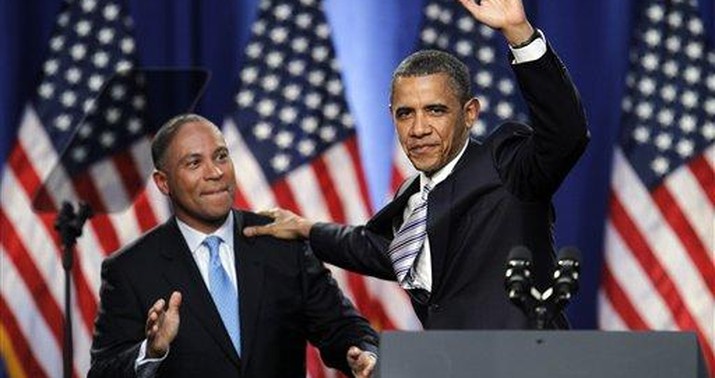 I can’t believe Patrick’s actually going through with it. I get the logic, sort of, as I explained in this post a few days ago: As a black former governor of Massachusetts, he could theoretically make a splash in New Hampshire and South Carolina.

But in reality, virtually no one knows who he is. He’d have three months to put a campaign together {after many of his old advisors have joined other campaigns), raise money, hit the trail, and elbow his way into the top tier. Show of hands: Can anyone remember the last time a late entrant in a presidential race seriously contended for the nomination? Even our two recent “outsider” presidents didn’t dare wait this long. Trump was in by June of the year before the primaries and Obama announced nearly a year before the Iowa caucuses. If you want to get in late, you need megawatt name recognition and either a truckload of money or the ability to raise a truckload of money instantly. Oprah. Michelle Obama. Not Deval “Who?” Patrick.

But here we are. He’s doing it.

Former Gov. Deval Patrick of Massachusetts told senior Democrats Wednesday that he will enter the presidential race, according to two party officials, reversing his decision last year to forgo a run and adding yet more volatility to an unusually fluid Democratic primary…

In his conversations with Democrats this week, Mr. Patrick acknowledged the scale of the challenge he faces by getting in this late. But he has received encouragement from some in the party who believe the race remains unsettled — and that he could prove a formidable candidate. Mr. Patrick hopes to bridge the divisions that have shaped the contest so far, appealing to centrists and liberals, white and nonwhite voters and across generational and economic lines in a way none of the candidates have been able to do. A close friend of former President Barack Obama, he has told advisers that he envisions a campaign similar to Mr. Obama’s 2008 bid, focusing more on bringing people together and healing the country than making a particular ideological case…

He has missed the filing deadlines in two states, Alabama and Arkansas, so he begins at a disadvantage should the primary evolve into a marathon where every delegate is crucial. And he’s already started to draw fire from liberal critics for his current post at Bain Capital, the private equity firm that Senator Mitt Romney of Utah co-founded and led, and that Democrats assailed Mr. Romney for when he ran for president in 2012.

Alabama has a large black population, exactly the sort of primary Patrick should have been eyeing as a place where he could potentially pick up delegates. As it is, he waited so long that he won’t even be on the ballot. That’s how apparently haphazard this decision is. It’s baffling.

I can’t imagine why he’d bother — unless he has an ace in the hole that’s going to catapult him overnight from nonfactor to serious contender. An endorsement, perhaps. The biggest one there is in the Democratic primary.

Is Obama about to stab Biden in the back by throwing his support to his old pal Deval? If you think the bit in the excerpt about Patrick receiving encouragement from “some in the party who believe the race remains unsettled” is too cryptic, how about this tantalizing report in the Atlantic?

Obama himself is known to be an admirer of Patrick’s political expertise—in fact, Patrick may be the only current politician whose skills Obama truly respects. That admiration is in part why some close to the former president—including Valerie Jarrett, Obama’s longtime confidante and senior White House adviser; David Simas, Obama’s former White House political director and the current CEO of the Obama Foundation, who previously worked as deputy chief of staff to Patrick when he was governor of Massachusetts; and David Axelrod, the former Obama political strategist—spent time last year trying to encourage Patrick to declare his candidacy for 2020. Two years ago, before the Democratic field began to coalesce, the ex-president himself urged Patrick to run, Obama aides told me at the time…

Though I’m told that Obama remains determined to stay out of the primaries, he’s following the race closely, and has been talking with people about the Biden campaign’s struggles, as well as about Elizabeth Warren’s failure—despite the overall strength of her candidacy—to attract many nonwhite voters. (I’m also told that Jarrett, in particular, has been expressing worries about the strength of the field, though she didn’t respond to an email I sent her about this earlier this week.) No one close to Patrick or the ex-president would speak with me on the record about their relationship in the context of the 2020 race, and a spokesperson for Obama declined to comment on whether the two friends have conferred about a Patrick candidacy. But multiple people who know both men told me that they can’t imagine Patrick moving forward with a presidential campaign without him talking it through with Obama to get a frank assessment of his chances.

It makes zero sense for Obama to encourage Patrick to run now unless he’s prepared to lend a hand to boost him. Patrick will be competing for the same black Obama supporters that Biden is counting on to push him past Bernie and Warren for the nomination. It’s suicide for ObamaWorld to risk having Biden and Patrick split those votes between them; that’s the surest way to clear a path for one of the “unelectable” far-left candidates to win. All Obama and Jarrett and the rest of the Hopenchange cheering section for Patrick will accomplish by nudging him to get in is fatally weakening Biden, an own-goal if ever there was one.

Unless Obama intends to effectively take Biden out by endorsing Patrick. That would change the whole calculus. Obama fans in South Carolina would immediately swing behind Patrick, pushing him into double digits. Democrats in New Hampshire would pay attention too. Patrick really would be a top-tier candidate overnight. But at a steep cost — the total betrayal of Joe Biden by his former boss, who’s vowed until now to stay out of the race and whose friendship with Biden has been one of Grandpa Joe’s core political assets. Remember that Obama actually thwarted Biden’s presidential ambitions once before when he discouraged him from running in 2016 against Hillary. Now he’d be blowing him up after months of time and expense spent on the trail by Joe and his campaign. And he wouldn’t have a good excuse based on the current polling: Biden remains the frontrunner in national surveys and is right in the thick of things in Iowa and New Hampshire, not to mention comfortably ahead in South Carolina. If O and Deval Patrick are worried that Biden can’t go the distance, the solution is obvious: They should endorse Biden. That might be all Grandpa Joe needs to get across the finish line.

But Obama doesn’t want to do that, as he knows the left will despise him for thwarting their big opportunity with Bernie and Warren. And he also doesn’t want a Biden loss to Trump laid in his lap next fall. You know what progressives will say: Bernie would have won. Blame Obama. Not great for O’s presidential legacy. If he’s going to endorse, it would be a candidate whose odds of victory he’s more confident about. Say, Deval Patrick’s.

I don’t know, though. Maybe there’s a path for Patrick even without the Obama endorsement? Kinda sorta?

Hard to see him doing so well in NH when there are no less than four candidates bunched up near the top there. I can imagine him passing Buttigieg but it’s difficult to imagine Biden, Sanders, and Warren voters giving up on their candidates. Would a fourth-place finish for Patrick there be enough to gain him traction in South Carolina? As for the second scenario, if your best shot at winning the presidency is a brokered convention, you … don’t have a great shot at winning the presidency. Certainly not great enough to justify the huge devotion of resources that a months-long presidential campaign would require.

Exit question: Seriously, is Obama about to shake up this race by backing his buddy?

Wonder How the NYT Got the Leak From Bolton's Unpublished Book? Look Who's Reportedly Vetting It.

Here is a list proving not everything Hollywood produces can be considered ‘’art’’.

The power of Roberts does not compel you.

Pennsylvania Democrats: A Sanders-style fracking ban would kill any chance of defeating Trump in the state

“…they’re going to have a hard time winning.”

If only someone had warned them. Oh, wait… we did.

Plus: Why would Ghislaine Maxwell visit Buckingham Palace four times in a day?

GOP Sen. Mike Braun: I think Trump will learn his lesson from this impeachment

Pluralities in all three partisan groups agree: Joe and Hunter Biden should be called as witnesses