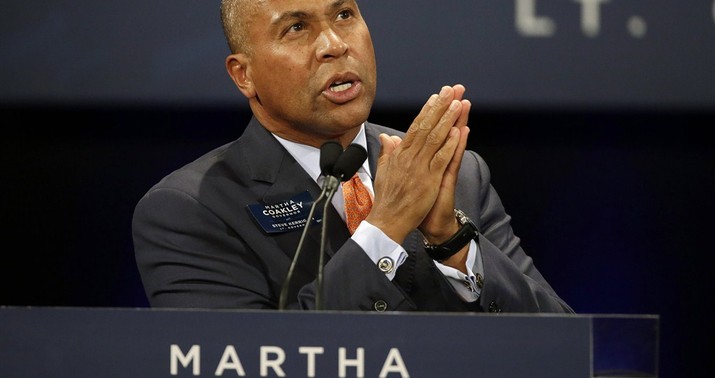 In one sense it’s a no-brainer. He spent eight years as governor of the state next door to New Hampshire so his name recognition will be high there right out of the gate. He’s also one of the most prominent black Democrats of the past decade and a friend of Barack Obama’s so he’d be well positioned to make an impression in South Carolina. Especially with the two black candidates in the race, Kamala Harris and Cory Booker, having failed to catch on there.

But in another sense it’s a pure “huh?”. Had Patrick spent the past six months campaigning, you can imagine him in the thick of the race in both states. As it is, why would any voter who’s spent the better part of the year studying their options and settling on a candidate suddenly abandon their choice to gamble on Patrick? He’s not a dynamo of charisma who’ll win voters over with one speech. He’s a resume politician, the sort of candidate whose experience you mull over before deciding he has the most points in favor among the field.

Not optimally suited to a late entry, in other words. But here we are.

Mr. Patrick told party leaders he doesn’t think any of the candidates running have established political momentum and that he thinks there is an opening for somebody who can unite both liberals and moderate Democrats, according to Democrats who have spoken to him.

At the same time, Massachusetts Democrats close to Mr. Patrick have started to reach out to prominent party leaders in early nominating states to alert them that he may run, according to one Democrat who has received an inquiry…

To compete in New Hampshire’s primary, Mr. Patrick would have to file there this week: the deadline to appear on the state’s ballot is Friday.

Why’d he wait so long? Nothing has changed dramatically in New Hampshire or South Carolina since late summer that would make now an obviously more opportune time for Patrick to get in than then. Biden, Sanders, and Warren have been bunched up in NH in the low 20s/high teens since mid-August. Warren did see some major momentum there in October that briefly made it seem like she might run away with the state, but she’s since come back to earth. That might explain the comment in the excerpt about no one having established momentum — but again, that was also true this past summer. Patrick stayed out. How come?

It may be South Carolina that finally twisted his arm. Biden has led big there since entering the race thanks to support from the state’s mostly black primary electorate, sometimes by 30 points or more. Recently, though, that advantage began to shrink as Warren began to rise. In one poll taken in mid-October his lead dipped to 17 points. In another taken over the same period it declined to 11. Patrick might have read that as evidence that South Carolinians aren’t as sure about Biden as they once were, creating space for another Friend of Barack to jump in and make a dent.

Amazingly, Patrick would be the only former governor in the race besides Steve Bullock, who’s barely in it. That would be his pitch to voters, I assume — executive experience plus his biography. Biden can afford to shrug off Mike Bloomberg’s candidacy since their respective bases don’t overlap despite the fact that both candidates qualify as centrists. Biden’s base is older Democrats, working-class whites, and Obama-supporting black voters. Bloomberg’s base is … I’m not sure, but certainly not those last two groups. Patrick, however, certainly could theoretically loosen Biden’s hold on black South Carolinians, which would potentially wreck Joe’s candidacy. It’s surprising that he’d consider getting in knowing the damage he risks doing to the great neoliberal hope in the race.

And how would he put together a campaign so quickly? Bloomberg can do that because he has more money than God. Patrick doesn’t. Some of his top aides have already gone to work for other campaigns too, although the Times claims that he’s lined up a former Kamala Harris advisor to join the team in case he makes his move. I assume he won’t follow through in the end and that this tease is really a matter of making his political presence in the campaign felt with an eye to working with the nominee next year. Patrick was at the DOJ under Bill Clinton and was considered for Attorney General by Obama. He could land that job for the next Democratic president if he adds a little value to his endorsement now.

Exit question: If Patrick is serious, might Trump’s impeachment trial be a factor in his considerations? Remember, Warren and Sanders will be stuck in Washington once the Senate trial begins. Patrick could spend all day out on the trail in NH while they’re out of commission for the better part of a month trying to erase their polling advantage.