SF Chronicle poll: Pervasive gloom about the city's future has many looking to leave

This summer the San Francisco Chronicle polled 1,600 residents about the state of the city and yesterday the paper published a series of articles summarizing the results. As you can probably guess, the results were not good. The Chronicle described it as a “pervasive gloom” about the city’s future. And that is leading more than a third of residents to say they plan to leave.

San Franciscans were largely in agreement about the city’s biggest problems: Homelessness took first place, followed by public safety and housing affordability. When asked if, three years from now, those problems would be significantly less severe, nearly 70% of people said either “slightly likely” or “not likely at all.”

During the pandemic, about 20% of the city’s younger population (25-29) moved away and the poll indicates that trend will continue.

People who expect to move away in the near future tend to be younger adults — the people who will determine the city’s cultural identity, drive the local economy, and start businesses and families.

“San Francisco’s risking a brain drain,” said Rebecca Eissler, assistant professor of political science at San Francisco State University. “It’s worth considering for a politician. What do we do to keep young innovators?”

Here’s a Chronicle chart showing 37% of respondents overall planned to move away within three years but among young people that number jumps to 54%! 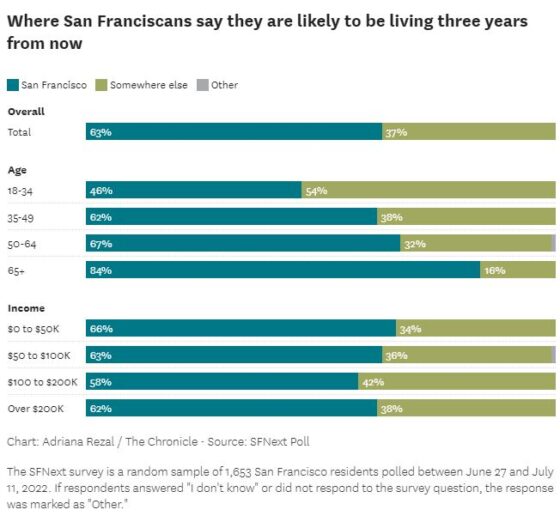 The reasons for this aren’t terribly difficult to fathom. As mentioned above, the big three are homelessness, public safety and the cost of housing. And on those fronts, there is absolute agreement among all segments of the population, regardless of age, gender, race, income or education level that things in the city have gotten worse. Just look at all the red in this chart created by the Chronicle. 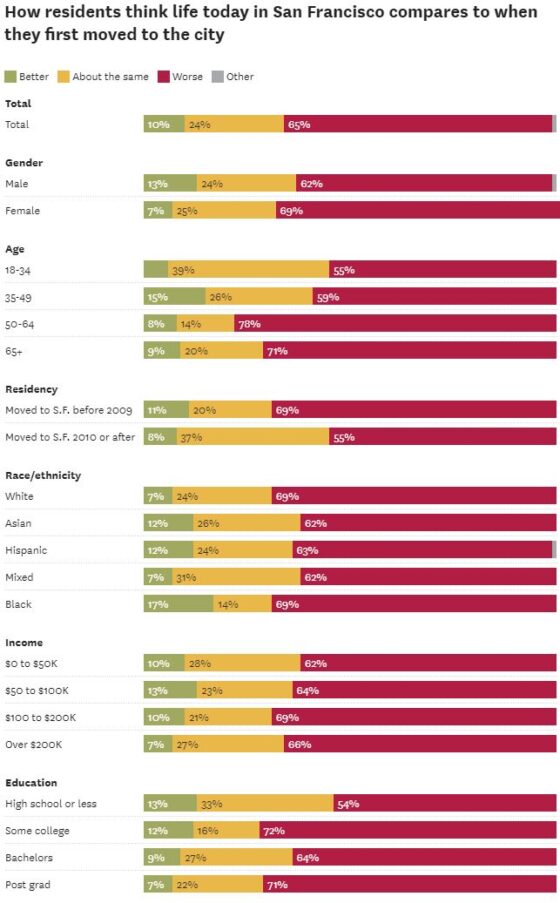 There’s a separate article about one of the major drivers of this gloom: public safety. Remember just a few months ago former DA Chesa Boudin was traversing the media landscape claiming that crime in San Francisco was heading down. That may be true for some categories of crime but I think the results of this poll help explain why he was recalled anyway.

“I think that’s extraordinarily high,” former city supervisor Michael Yaki, who is now a political analyst, said of the overall numbers. While personal property theft may not elicit the same degree of terror as a violent attack, it still affects people’s feelings of security, he said.

“When a car is broken into, and things have been stolen, there’s a sense of personal violation — especially if it occurred on the street that you live,” Yaki said. “The fact that you could have been out there when it happened, and what if you had interrupted it? Those things go through people’s minds.”

What is the old saying? A conservative is liberal who has been mugged. When nearly half of the population has been personally ripped off in the previous five years, that’s a lot of mugged liberals. The poll showed that police are not held in especially high regard. Just 18% of respondents said they were doing a good job. Still that’s higher than the ratings for the Board of Supervisors (12%) or the School Board (11%).

The Chronicle also asked people what they love and hate about the city. Things they loved included the weather, the beauty, the diversity and the fact that the city was politically liberal. But the things they didn’t like about the city once again sounds like liberals who’ve been mugged by reality.

To be fair, we also asked poll respondents what makes them saddest about life in San Francisco. Those responses weren’t surprising but were still disheartening. The word “filth” seemed to show up in every other answer.

It’s become openly filthy, and no one seems to care. The state of disrepair. I only see the city being cleaned up when celebrities and dignitaries come to town. The city is littered with garbage and dirt everywhere except Pacific Heights. Drug paraphernalia littering the sidewalks. It is almost embarrassing to say I am from San Francisco when I travel.

Other respondents focused on crime — and the feeling our leaders don’t know what to do about it.

Drug dealers. Break-ins. Crime. My car windows have been broken four times this year. It’s sad when people are afraid to come here. Our politicians running the city do not have a clue.

That particular story ends with a criticism of people like me: “Fox News and all the other faraway haters who relish criticizing San Francisco don’t get a say. The people who live here and are striving to make the city better most definitely do.”

I’ve been to San Francisco many times and I don’t hate it. It is a beautiful place or at least it could be. But it has clearly taken a turn for the worse in the past few years. That’s evident to anyone who looks. I’m not hoping people give up and move away but I think that’s probably inevitable unless the city can get a handle on some of the big problems it is facing (to be fair most cities on the west coast are facing the same big problems). And I’ll give the residents of San Francisco credit for trying. Recalling the woke school board members was the right call. Getting rid of DA Chesa Boudin was the right call. But San Francisco has been digging itself into this hole for a long time. It’s going to take a sustained effort to get out of it and bring the city back to some level of sanity and safety on the streets.

DHS: Venezuela is sending criminals to the border; Congressional Republicans demand the report be released
Karen Townsend 4:01 PM on September 24, 2022