Seeing germs: How viruses spread from person to person

You may remember the guy in this video below. Mark Rober is the engineer who created the porch pirate glitter bomb back in December of 2018. He also created a sequel last year. Rober’s most recent video, which was published Wednesday, is about how easily germs can spread from person to person and from your hands to your face.

In order to simulate this, Rober used a glowing powder that is invisible under normal light but which fluoresces under a black light. This particular experiment took place in a school setting but the same thing obviously applies to an office, a grocery store or anywhere more than a dozen people gather together in a given space.

As you’ll see, Rober started by putting the powder on the hands of just two people, the teacher and one student. After a while he used his black light to see where signs of the “infection” had been left behind and, not surprisingly, it was everywhere.

That didn’t come as much of a surprise. The really creepy part of this video (at least to me) is what comes next. If you’ve ever had a dog or cat that has had some sort of surgery, you’re already familiar with the cone of shame. We put these on our animals with the idea that, unlike us, they aren’t smart enough to control their natural inclination to nibble at any stitches they might have. 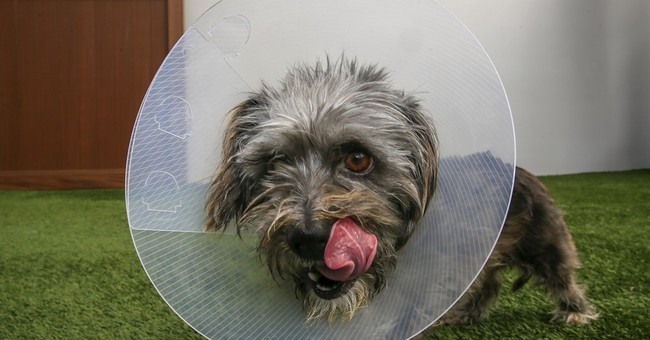 But it turns out when it comes to not touching our own faces in the midst of a pandemic, we’re probably no better than dogs and cats. Rober put the powder on his own hands and then did his very best not to touch his face for a few hours. The result: A complete failure. Despite his sense that he was making an extraordinary effort to remember not to touch his face, it turned out he got the invisible powder everywhere.

I suspect if we were to wear bulky mittens as the human equivalent of a cone of shame, must of us would be shocked at how often we were sticking the mittens in our own faces.

So really, the only thing that works is some social distancing and that’s why California, New York, and other areas are simply telling everyone to stay home and wash your hands frequently.

Laura Ingraham: I'm not there yet on Trump 2024

Biden administration fighting to have lawsuits by families separated at the border dismissed in court
John Sexton Jan 18, 2022 7:20 PM ET

Wait...So the FBI Lied About the Ending of the Texas Synagogue Hostage Situation
Townhall
Ray Epps' attorney explains why he was removed from the FBI's suspect database
Twitchy
What in the Fresh Hell Is Chuck Schumer Doing?
Redstate
Media Meltdown Over Justice Sotomayor's Failure to Cope with the Risk of Living
PJ Media