I really don’t get what Michael Avenatti is doing here. He’s facing numerous felony charges for extortion and defrauding his clients of their money but suddenly he’s decided it’s time to have a public debate with Ben Shapiro? All of this happened today on Twitter after Avenatti lashed out at Meghan McCain:

Other than being born as the daughter to John McCain, can someone please again remind me what the hell Meghan McCain has ever accomplished in her life? Especially as it relates to publicly commenting on issues like degrading children in custody?

I guess he has a lot of time to watch the View these days. In any case, Ben Shapiro was one of many people who offered a snarky response:

To which Avenatti responded with a challenge: To debate him anytime, on any show.

Hey Ben – anytime you want to discuss any of the issues in person on any show, you let me know. Until then, step up or shut up. You and so many others on the right are nothing but twitter keyboard warriors. And when pressed, complete cowards.

You are truly a warrior, sir, allegedly against your disabled clientele. https://t.co/6ff1R7MRm9

Ouch! That’s a reference to the paraplegic client Avenatti allegedly embezzled settlement money from in California. Here’s how NBC News reported that story in April:

The charge involving the paraplegic man says Avenatti drained a $4 million settlement paid out to the client by Los Angeles County, using “portions of the settlement to finance his coffee business or pay personal expenses,” the U.S. attorney’s office statement said.

“Avenatti concealed the receipt of the settlement from Client 1 and instead gave him periodic “advances” of no more than $1,900 and paid the rent for his assisted living facility,” the statement said.

Avenatti lied by telling that client as he was trying to buy a house that his settlement money was not available, causing him to fail to meet escrow, according to the indictment. Avenatti is also accused of failing to fulfill a promise to respond to that client’s Social Security Administration inquiry, leading to a loss of benefits.

This is very similar to the allegation recounted in the petition to suspend Avenatti’s license to practice law in California. In that case, a client named Gregory Barela received a settlement but Avenatti allegedly claimed for months that the company had refused to pay. Barela only found out that the money ($1.6 million) had been paid to Avenatti after he hired a second lawyer to look into it.

The Twitter account for The Vegas Take, a Vegas radio show that already had Avenatti booked, tried to get in on the act:

@benshapiro you have decided to go after @MichaelAvenatti on social media. We have him in studio tomorrow. We would like to offer you an invitation to debate him tomorrow night. Will you accept?

.@benshapiro – for the first time in your life, show some cojones and let’s do this. It’s not the BBC so you should be fine. But to be clear, let’s agree that there is no whining. Cool? https://t.co/JsH8EGaIiR

Hey @benshapiro, all digital cheap shots aside, the real question is this:

Are you knowledgeable, articulate, and confident enough to step in the ring with @MichaelAvenatti ?

Shapiro also received an email from someone claiming to be Avenatti and demanding the showdown on The Vegas Take. But Avenatti chimed in to claim the email was a fake:

Ben – look at the tweet I posted 6 days ago. You just got played by a right wing nut. Probably someone that follows you. You should be smarter than this. pic.twitter.com/JSMXRWEccn

Maybe the email was fake or maybe Avenatti was lying? He did something similar after a Twitter spat with Popehat in March. After some back and forth online, Popehat got a call from Avenatti. After Popehat wrote about the call, Avenatti denied he had made it and claimed Popehat had been fooled by an imposter. Bottom line, Avenatti likes to escalate behind the scenes and then deny he did so when called out.

In any case, I’m not sure what good can come from debating Avenatti at this point. He’s not a potential Democratic candidate. He’s not representing Stormy Daniels (he’s accused of stealing her money too). Avenatti appears to be headed for disgrace and prison at this point so why bother debating him? I don’t see the point, but if Ben Shapiro decides to call into the show I’ll update this post. 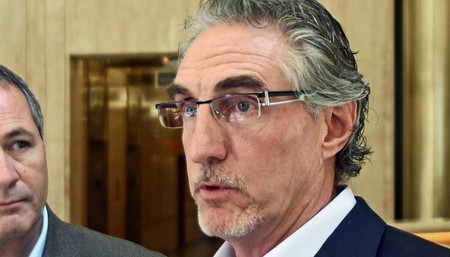 Caught Red-Handed: NBC News Busted for Editing Out a Crucial Detail in the 911 Call of the Ohio Shooting
Townhall
'Who made this?': Now it's LeBron James getting the Gif treatment and it's 'brutal'
Twitchy
NY Post Reporter Masterfully Turns 'Systemic Racism' Tables on Jen Psaki During Press Briefing
Redstate
The Morning Briefing: Trump's Biggest Failure Was in Not Gutting the FBI
PJ Media