Why are Democrats (and the media) still trying to rehabilitate socialism?

This is a subject that John addressed on Monday evening, dealing with a recent Washington Post editorial extolling the virtues of socialism and claiming to explain how progressives could “reclaim” the concept so that it wouldn’t be treated like a dirty word anymore. The author, Elizabeth Bruenig, builds up an excitable case, as John pointed out, but then runs her own argument directly into a brick wall. (Emphasis added)

Clarifying exactly what “socialism” means once and for all likely won’t happen anytime soon. But that doesn’t mean that voters who are attracted to democratic socialist politicians such as Sen. Bernie Sanders and House candidate Alexandria Ocasio-Cortez don’t know what they’re getting into. Proposals to wipe out so-called right-to-work laws, to make college tuition-free or to provide universal health care are resonating with those supporters.

After that comes in inevitable pitch which has been shouted on the streets of places like Russia, pre-Bastille France, Venezuela and Cuba over many generations. Join us, brothers (and sisters, these days), as we take control of the chambers of power and the wealth therein, redistributing it under the banner of absolute truth, reason and justice! (That last bit is a direct quote from Friedrich Engels.)

At the heart of the democratic socialist vision flowering on the American left is the recognition that more than policy tweaks will be needed to empower everyday people to participate meaningfully in society and democracy. Working Americans deserve a say in how the country’s vast wealth will be used, and that will be possible only when inequality is reduced, corporate and big-money donors are banished from politics, and lawmakers are truly accountable to the people. It’s not so much to ask. But democratic socialists are the only ones asking.

A few observations from the peanut gallery of democracy, if I may. The original Marxist vision of socialism sounded wonderful (much like every attempt at communism) if you happened to be part of the poor and the downtrodden. Breaking down the halls of the powerful to take their riches, load the perfumed bastards into the tumbrils and fire up the guillotines always sounds great in the beginning. But the wheels inevitably come off in the worst possible way. And there’s a reason for that which people like Bruenig conveniently ignore.

Rule of the masses by the masses can’t work because of the basic nature of man. There’s an alternate term to describe such a situation and it’s called anarchy. Now, in a brutal sense, true anarchy is the ultimate playing field describing equality of opportunity. This can be confusing to many who have never experienced anarchy because equality of opportunity is also the defining characteristic of democratic capitalism. Except in a state of true anarchy, the competition quickly thins out all but the strongest. You had the opportunity, but 90% of you didn’t manage to do anything with it. Instead, you wound up dead, a sex slave or a laborer in chains on somebody’s farm.

Moving back to the more practical versions of socialism, once the peasants have looted the treasury and the granary, the realization quickly sets in that you can’t just let everyone take as much as they want. It has to be organized. And people will still need to build shelter, produce food and other goods and generally keep the lights on. As I said… such a system requires organization, which means that some people will have to be in charge. Once you put people “in charge” the playing field immediately shifts. They assure you that you’re all still comrades and that all the animals are equal, but the creeping realization soon arrives that some of the animals are more equal than others. (If you didn’t get that reference you should probably stop reading now.) The organizers and their friends build up their power structure while calling it everything but “power” because that’s what people do.

The fact is that socialism is antithetical to democracy, while capitalism is required to sustain democracy. It all goes back to that question of equality mentioned above. Socialism is founded on the concept of enforced equality of outcome while democracy relies on equality of opportunity. You can’t have both simultaneously. Enforced equality of outcome inhibits creativity, productivity and enthusiasm. Equality of opportunity provides winners and, unfortunately, losers. But we’ve managed to make it work by tempering capitalism with social safety nets to ensure that those who finish near the back of the pack aren’t entirely crushed under the wheels of progress.

I won’t rule out the possibility that the United States might take an even sharper turn to the left and fall under the shadow of socialism one day. But if it does, it will only be the beginning of a cycle which ends with another revolution. (After a period of starvation, riots and government oppression the likes of which modern Americans have never seen.) That’s just how it works. We should avoid it if we can. And if we can’t, be sure to stock up on food, medicine, and ammunition. You’ll need it.

Politico: The border crisis is probably about to get worse once Title 42 ends
John Sexton 2:30 PM on November 25, 2022 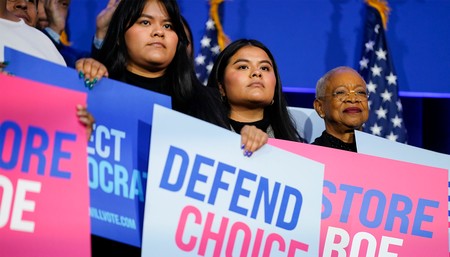