Video: When Her Majesty attacks

What better way to kick off a long weekend than to sit back and enjoy a montage of snippy lowlights featuring America’s sweetheart? Via David Rutz and the Free Beacon:

As I watched this, two thoughts came to mind: (1) About halfway through, Hillary claims she “fully complied with every rule [she] was governed by” regarding her secret, un-secured email server — which is just flat-out untrue.  She and her team have habitually lied throughout email imbroglio, from the manner in which “personal” emails were flagged and deleted, to the supposed reason the private server was set up in the first place, to the very existence of certain email accounts.  Hillary hasn’t had to answer for these…inconsistencies because she’s barely taken any questions at all, let alone subjected herself to sustained, in-depth questioning.  Perhaps that’ll change after her very exciting campaign re-launch or whatever.  Don’t hold your breath.

(2) The short string of facial expressions and glares (0:33 – 0:41) reminds me of what might be the funniest clip on the Internet.  If you’re unacquainted with Lucille Bluth and Arrested Development, fire up Netflix and fix that posthaste:

Andrew Stiles has done the heavy lifting comparing Hillary to Lucille, but in light of recent events, this classic quip seems particularly pertinent: 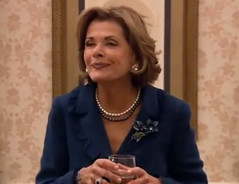 Hillary Clinton: All the down-home, relatable charm of Lucille Bluth, but without the humor.

Curiously incurious: Where is the media coverage of China's defector?
Ed Morrissey Jun 18, 2021 11:01 AM ET

Yang on NYC mentally-ill homeless: Get them into psych beds where they belong
Ed Morrissey Jun 18, 2021 10:31 AM ET

Honeymoon over? Biden's approval rating falls under 50% in Monmouth poll