As you digest the results of Dartmouth College’s annual New Hampshire ‘State of the State‘ poll, bear in mind that Barack Obama carried the Granite State by nearly six percentage points in 2012.  My Townhall colleague Dan Doherty flagged the survey of registered voters, which contains all sorts of ugliness for Democrats.  The lowlights, based on a Republican-friendly (24/29/45 – D/R/I sample):

(1) President Obama’s approval rating in the state has slumped (36/54), with his personal favorability similarly underwater at (28/49).  He’s down significantly in both categories compared to last year, a decline largely driven by independents and some disaffected Democrats.

(2) Obamacare is deeply unpopular among New Hampshire voters.  Just 34 percent approve of the law, with 58 percent disapproving.  The breakdown by political party is striking.  Republicans despise the law (5/91), Democrats support it (66/22), while independents drag down its numbers (36/54).  New Hampshire residents who say they’ve personally benefitted from Obamacare are outnumbered by those who’ve been harmed by nearly a three-to-one margin (10/28).  The state has been uniquely impacted by “access shock.”

(3) This bar graph goes out to Sen. Rand Paul.  Here’s how badly Republicans are “offending people” in New Hampshire: 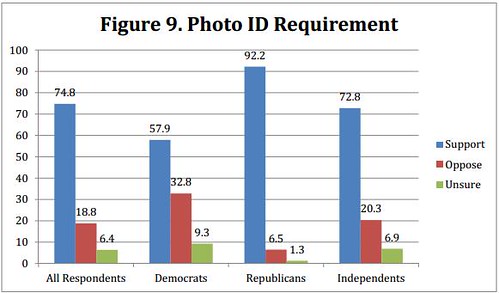 This lopsided outcome has been replicated nationwide.  Overwhelming majorities of Americans back common-sense voter ID laws, including strong majorities of blacks and Hispanics.  Opposition is loud, and is coordinated by the professionally aggrieved class.

(4) Incumbent Democratic Senator Jeanne Shaheen is upside-down on both job approval (34/35) and personal favorability (34/37), though her deficits aren’t nearly as dramatic as the president’s.  In a series of hypothetical November match-ups, Shaheen’s solid re-elect number tops out at 39 percent.  Her lead sits within the margin of error against Scott Brown (39/36) with 25 percent undecided; against former Senator Bob Smith, Shaheen leads (38/32) with 19 percent undecided.  Most of the “undecideds,” incidentally, are Republican and independent voters.  Shaheen cast the deciding vote for Obamacare and repeated her party’s false “keep your plan” pledge.  Here’s Brown’s latest web ad touting support from military veterans and highlighting Brown’s own service:

(5) I’ll leave you with this, just for fun.  Note the only match-up that falls outside the MoE: 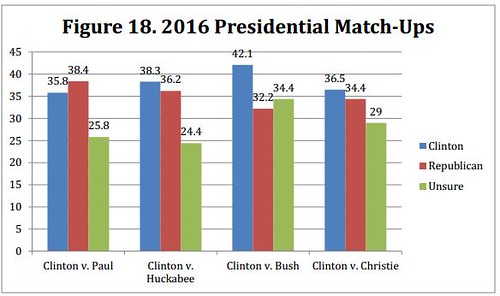