It’s getting ugly out there for Democrats — which is odd, considering the spectacular Obamacare “winning streak” they were bragging about as recently as last week.  The current cluster of national polls is littered with red flags for President Obama and his party, starting with yesterday’s National Journal survey.  Democrats don’t fare much better in a fresh “battleground” poll conducted by their own party’s messaging men.  How’s this for home cooking?

– Republicans hold a five-point advantage (44/38) on the generic Congressional ballot, a margin that holds steady when leaners are included (47/42).  GOP voters are winning the intensity sweepstakes, too.

– President Obama is underwater by double digits on overall approval (43/53), as voters overwhelmingly believe the country is on the wrong track (25/67).

– Voters remain cold on Obamacare with just 37 percent expressing “warm” feelings, as opposed to 52 percent “cool.”  Though a majority of the public opposes the law (52 percent), the same percentage expresses a preference to “fix” the law, with 42 percent favoring repeal.  (Democrats love these numbers; they shouldn’t, for reasons outlined here and here).

Ed broke down the new WaPo/ABC News poll this morning, but there’s one data point I’d like to underscore: 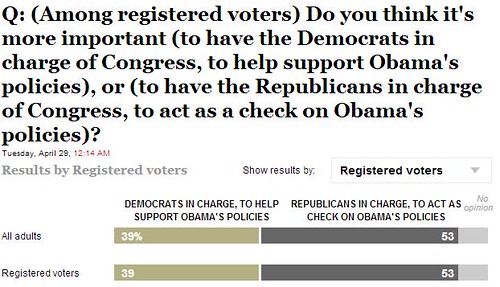 There’s your fall road map, Republicans.  Obama is toxic.  When his name and policies are introduced into the calculus, the generic ballot result in this (D+11) poll goes from a virtual tie to a double-digit GOP advantage.  Among independents, the breakdown on this question is even more striking at (30/59).  The same principle applies to this survey’s Obamacare results.  This particular series has consistently been an outlier on the healthcare law, producing much more positive numbers than most other polls.  Part of that phenomenon is likely attributable to the vague wording of the question, which mentions neither “Obamacare” nor the “Affordable Care Act.”  In this iteration, the law is underwater by four points.  But when Obama’s name is added into the mix, the numbers shift to (39/54), which is more in line with other polling.  The Washington Post’s political blog, The Fix, notices that a deeper dive into the internals spells real trouble for Democrats ahead of the fall elections:

A new Washington Post-ABC News poll offers fresh evidence that Democrats are facing major enthusiasm problems within their base that make it difficult — if not impossible — for them to rebuild the winning coalition put together by President Obama in 2012. While nearly seven in 10 of all registered voters say they are “absolutely certain” to vote in November, several key Democratic constituencies are much less committed to voting. Barely half of voters ages 18 to 39 are certain about voting (53 percent) and 55 percent of non-whites describe themselves as certain to cast a ballot. By contrast, more than seven in 10 whites and voters older than 40 say they will definitely cast ballots — both groups that have favored Republicans in the past two elections…Beyond core partisans, independents who tilt Democratic are strikingly less motivated. Nearly three-quarters of independents who lean Republican are “certain” voters (74 percent), compared with just 50 percent of Democrats. The dynamic parallels Republicans’ turnout advantage in 2010. In that election, turnout dropped sharpest among young voters, African Americans and Hispanics. Those who showed up supported Republican House candidates over Democrats by 51 to 45 percent, despite Democrats holding leads among polls of registered voters.

These figures confirm Democratic pollsters’ urgent warnings about the party’s base turnout challenges in 2014.  Harvard’s new poll of Millennials heaps more evidence atop the pile.  Among voters aged 18-29, just 23 percent say they’re certain to vote in the fall.  Fully 81 percent say they don’t consider themselves politically active.  This group leans Democratic (37/25/38 – D/R/I), but they’re strikingly disengaged from politics and quite cynical.  That cynicism has impacted views of Captain Hopenchange.  His top line approval rating is upside-down (47/52) with this group, and he fares significantly worse on specific issues: The economy (37/61), healthcare (39/59), deficits (31/66), Syria (34/62) and Ukraine (38/59).  Not fired up, not ready to go.  I’ll leave you with some media analysis from this morning:

The Coma Before the Storm
Townhall
'This is NOT spying': Don't look now, but the DOJ subpoena stories about Adam Schiff and Don McGahn appear to be blowing up
Twitchy
Bill Maher Tells the Young and Woke White Power Isn't at a Historic High
Redstate
Turks Enraged as Ancestry.com Reveals the Truth: Most of Them Are Greeks
PJ Media