America's energy boom: To be, or not to be?

I’ve spent a good bit of time pondering this since the election, and it’s definitely going to be, er — interesting? — to see where President Obama decides to take us with the wildly promising possibilities of our energy-production future.

On the one hand, it’s going to start getting real uncomfortable, real quick when his continued big-government policymaking somehow miraculously fails to whip the economy into shape, and the four years that for some reason weren’t enough to “get the job done” start to melt into eight. The Energy Information Administration released part of their annual energy outlook this week, and despite all of the greenie gloom-and-doom naysayers, our energy future is dazzlingly bright. We have oil and gas reserves available in remarkable abundance, and employment in these industries is the highest it’s been since 1988: 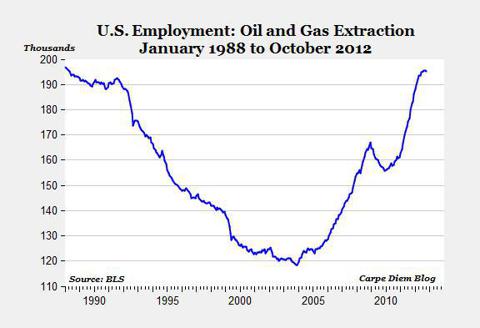 Since Fracking began opening up “tight” oil deposits in North Dakota’ Bakken Shale in 2005, domestic oil production has reversed a decline that began in the 1970s… Imports also fell below 40 percent in October for the time since 1992. But most encouraging has been the rise in employment in the oil and gas industry. An average of 70 new jobs per day has been added over the last two years, bringing total employment to 195,000, the highest level since 1988.

Currently the oil-and-gas sectors are going gangbusters, not because of Obama, but in spite of him. Much of the development that’s occurred in the past few years has gone down on state and private land, while Interior, et al continue with their meager, “you will take what we give you, and you will like it” permitting pace. If the federal government would speed up and expand their permitting allowances, we could see even more economic growth and development. The kind of jobs, wealth, and revenue that would come from such a boom would go a very long way in covering up the terribleness of Obama’s many other policy shortcomings.

On the other hand, President Obama is very much beholden to the interests of the Left: The globalists, the climate radicals, the green lobbies, and even the casually uninformed-but-oh-so-hip eco-trendy young folk that make up so much of his base. Joel Kotkin breaks it down:

The ideological stakes for the green movement are tremendous. Greatly expanded American fossil-fuel production violates the “peak oil” mantra that has underpinned environmental thinking for decades and undermines some of the core rationale for subsidizing expensive renewables such as solar and wind.

Geography also may play a major role here. Outside of Colorado, the industrial Midwest, and western Pennsylvania, where the shale boom is widely seen as boosting local economies, the vast majority of energy-producing states tilt strongly to the GOP. In contrast, Obama’s strongest support comes from green-oriented coastal residents whose familiarity with energy production starts and ends with turning on a light or switching on an iPad.

Obama’s financial base—in contrast to that enjoyed by the Republicans—relies little on the energy industry. The president’s corporate support comes largely from the entertainment, media, and software industries. Many of Obama’s strongest business backers, particularly in Silicon Valley, have become entangled financially with “renewable energy” schemes, many of which can only survive with massive subsidies in the form of tax credits, loans, and surcharges on energy consumers.

It’ll be a difficult decision to make — the green lobby is particularly well-monied and influential, and then there are the pushy eco-radicals like the ones who just spent two weeks at a United Nations conference trying to convince developed countries to quixotically move backwards into self-inflicted poverty. President Obama at least understands, however, that Americans generally don’t take too well to “necessarily skyrocketing energy prices,” which is why his campaign-self repeatedly tried to take credit for the energy boom currently going on while at the same time touting an “all of the above” plan that included renewables — heck, it’s the best of both worlds, right? But now, he’s going to have to start choosing: Strangle out hydrocarbon energies via regulation and pour more money into the green-energy black hole, or step back and allow the efficiency and innovation of the private sector to take it away?

Backfire: Dems beg Manchin to use reconciliation to rescue them from ObamaCare trap

George W. Bush made the ultimate gaffe during remarks at his presidential center
Karen Townsend May 19, 2022 10:01 PM ET

Is This the Most Embarrassing Anti-Gun Op-Ed Ever Written?
Townhall
'She's OLD, she gets cold': Taylor Lorenz posting pic of her thermostat set at 90 pisses both the Right AND the Left off
Twitchy
Durham: Hillary Clinton Lackey Testifies She Signed off on Pushing False Alfa Bank Story
Redstate
APPALLING: Teen Girl Disappears at NBA Game and Turns Up 11 Days Later in Nude Photos on Sex Trafficking Site
PJ Media