The continuance and/or discontinuance of the wind production tax credit is the subject of much debate among lawmakers and lobbyists at the moment, and it’s an issue President Obama often likes to bring up as a hot talking point on the campaign trail, particularly in when he’s in Iowa. Advocates like to throw around impressive-sounding statistics about how the wind industry is constantly furthering its own potential and providing Americans with an ever-greater proportion of their energy needs, and how the wind industry provides a bunch of jobs. Here’s some of the latest data, via The Hill:

Wind power posted the greatest gain in domestic energy consumption in 2011 as overall energy use dropped, according to an analysis by the Energy Department’s Lawrence Livermore National Laboratory (LLNL).

But AWEA says investment already is falling off for 2013, with the fate of an industry tax credit hanging in the balance. …

Democrats, led by the Obama administration, call the incentive a jobs issue, citing industry estimates that ending it would cost 37,000 jobs.

Sure, more wind farms have come online and supplied more power in the past couple of years due to sustained government “investment” (tax credits, state renewable portfolio standards, etcetera) while Americans’ overall energy usage has dropped (due to increased technological efficiency across all spheres and, oh yeah, we’re stuck in an almost-recession), but why is it that the moment the wind industry’s biggest source of special federal treatment is called into question, all of this ostensibly marvelous potential seems to suddenly disappear? As RealClearEnergy points out, when it comes to wind, it’s always boom or bust: 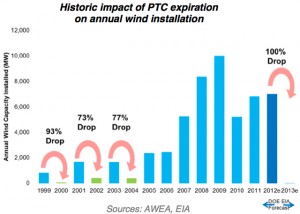 The wind energy lives and dies by its tax credit. That’s because there is no money to be made in generating electricity from windmills. They are tremendously materials intensive, consuming steel and concrete in prodigious amounts. Each 40-story windmill produces 2 megawatts at best, so you need hundred of them to equal a conventional power plant. Even then, they generate unpredictably and only 30 percent of the time. The only thing that makes them worth building is the production tax credit. …

With Republicans now in control of the House of Representatives, however, the PTC will probably not be renewed unless Democrats achieve a remarkable victory in November. As a result, windmill construction is about to end almost completely. Layoffs have already begun.

The wind industry and its lobbies are throwing all of the well-monied power and influence they have into the issue, but the problem is that all of these green jobs the Obama administration likes to tout aren’t wind-powered; they’re subsidy-powered. Ergo, they are not productive jobs and they come at an overall cost to our economy, whatever the supposed benefits and trumped-up statistics might say.

Darkness at Dune: The Nightmare of Martha's Vineyard
Townhall
Matthew Foldi does the Walker-obsessed MSM's job for them and airs out Raphael Warnock's own truckload of dirty laundry
Twitchy
Biden Drops a Whopper About DeSantis and a Mafia-Like Comment That Has People Talking
Redstate
5 Years After Las Vegas Concert Shooting, an FBI Whistleblower Reveals Probable Motive
PJ Media