After President Obama’s rather awkward rhetorical glitch during his interview with Univision — during which he essentially admitted that, in fact, no we can’t — I think we were all left feeling a little curious about exactly what it was everybody voted for in 2008.

President Obama and the Democrats of course had to scramble to offset Mitt Romney‘s “Okay, we’ll give you a chance to change Washington from the outside — in November” response (heh, I thought it pretty was funny), and in a way, I kind of understand what they’re getting at. From the Democrats: 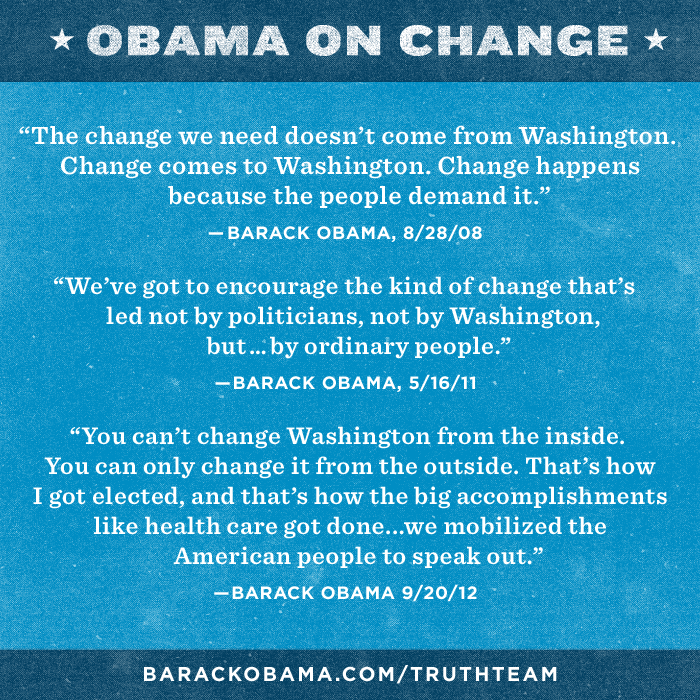 And President Obama at a campaign rally today, via Politico:

Obama took aim at those comments at a campaign rally in Northern Virginia — a return to an old ‘outsider’ campaign theme that he used with great success in 2008.

“For some reason, my opponent got really excited,” Obama said. “He rewrote his speech, proudly declared ‘I’ll get the job done from the inside.'”

Here’s the thing: At the end of the day, Washington is a reflection of us. Americans are the ones who pick, vote for, and send their candidates to D.C. to lead the country, and President Obama was swept into Washington in a tidal wave of “change”-inspired enthusiasm. But, here’s the thing: Americans got a nice taste of your idea of “change” during your first two years in office, and decided that they didn’t like it. Hence the Republican-“shellacking” that sent more conservatives into Congress to thwart President Obama’s agenda. So, in a way, he’s right. He really can’t get away with his brand of “change” for Washington if we don’t want him to (thank you, Founding Fathers!), so I really hope that he doesn’t sincerely think that all of the “Republican obstruction” he’s facing is some kind of cosmic accident.

Cassidy Hutchinson's Credibility Has Taken Another Hit
Townhall
'The difference matters': Reporter notes that the 'shot at' narrative is nuanced and suspect might not have taken aim
Twitchy
The Left Is Pouncing on Pics of Highland Park 'Person of Interest,' Desperate to Make Trump Link
Redstate
Five Tips on How to Have Fun AND Annoy Your Commie Neighbors on the 4th of July
PJ Media