DeSantis to The View: Hard pass on a guest apperance, thankyewveramuch

Would Ron DeSantis be welcome on The View? “We would be honored,” wrote the producers of the ABC News show that has called the Florida governor a “bigot,” a “fascist,” and — my personal favorite — “a negligent, homicidal sociopath.” Nonetheless, The View seems to think that DeSantis would appreciate an opportunity to enjoy that calumny in person:

Bryan Griffin, the deputy press secretary to Gov. Ron DeSantis revealed “The View” may actually want to hear from the Florida governor on Monday.

After the ABC talk show blasted DeSantis yet again, Griffin retweeted a clip revealing that they actually reached out for a proposed appearance.

.@TheView emailed our office on Friday asking for us to arrange an appearance from Governor DeSantis on the show. "We would be honored," they wrote.

Fox News produced a screenshot of their e-mail invitation, which they sent to the governor’s office rather than to his campaign: 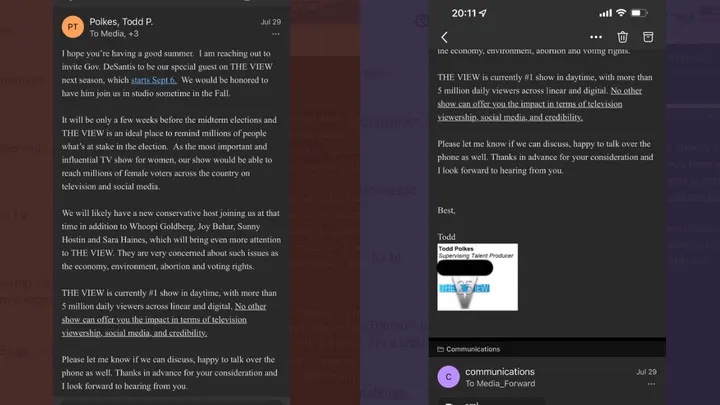 This is certainly a professional request letter, but the pitch is, er … problematic. “It will only be a few weeks before the midterm elections,” supervising talent producer Todd Polkes wrote on Friday, “and THE VIEW is an ideal place to remind millions of people what’s at stake in the election.” That’s arguable enough, but ABC News should be sophisticated enough to know you send campaign pitches to campaigns, not official offices.

“As the most important and influential TV show for women,” Polkes continues, “our show would be able to reach millions of female voters across the country on television and social media.” Again this argues facts not in evidence — does anyone really think of The View as influential and important, or just an ongoing crankfest? Even with that aside, DeSantis’ midterm campaign isn’t aimed at voters “across the country.” DeSantis is running for re-election as governor, which means he’s campaigning for votes in Florida. And it’s a pretty sure bet that The View doesn’t matter much to the voters DeSantis hopes to win.

Even so, national exposure never hurts, except when the forum routinely devolves into cheap demagoguery and smears, especially when it’s specific to the candidate. DeSantis’ gubernatorial office politely reminded Polkes of his show’s track record, and politely told The View to pound sand.

And brought receipts, too:

Here's our response to @TheView: pic.twitter.com/dyLNl9qexH

A week ago, New York Magazine lamented that Republicans had “stopped talking to the press.” That’s not entirely true, clearly, as Republicans still look for ways to get their message out to constituents and voters. They are just choosing to avoid openly hostile and borderline nutty venues, as Media Research Center director Tim Graham remarked, as a way to avoid promoting media outlets who claim balance but offer anything but:

New York Magazine posted David Freedlander’s article “Why Republicans Stopped Talking to the Press.” This headline is inaccurate, unless you think the liberal press is the only press. But it’s true that Republicans are wising up to the ardently editorializing, anti-“false balance” liberal press.

“I just don’t even see what the point is anymore,” said an adviser to one likely GOP aspirant, who requested anonymity to discuss strategy. “We know reporters always disagreed with the Republican Party, but it used to be you thought you could get a fair shake. Now every reporter, and every outlet, is just chasing resistance rage-clicks.”

Another consultant agreed, saying the rise of Twitter has given Republicans “a direct view into the id of every political reporter in America.” …

In a world full of right-leaning websites, podcasts, and talk shows, why should Republican candidates be interviewed by people who hate them any more than Democrats submit to Fox or Newsmax or the New York Post?

DeSantis’ team handled this perfectly. Don’t just reject the request but publicize the deep dishonesty of the venue as part of the public response. This didn’t come from the DeSantis campaign, but it does look like his team has its media strategy for 2022 — and 2024 — well established.

One of the Critical Items Retrieved From Trump's Mar-a-Lago Home Was a Cocktail Napkin
Townhall
DC attorney general says busing asylum-seeking migrants to the district 'is creating a humanitarian crisis'
Twitchy
Stacey Abrams Commits a Disqualifying Self-Own in Desperate Attack on Brian Kemp
Redstate
UKRAINE WAR: Russia's Saki Air Base Blew Up and No One Knows How
PJ Media