One way or another, the House of Representatives will finally have to act in some manner on impeaching Donald Trump. After threatening to do so ever since Trump took office, Rep. Al Green (D-TX) filed articles of impeachment last night, citing Trump’s tweets about four frosh Democrats as a “high misdemeanor.”  This opens up the very can of worms that Nancy Pelosi had worked hard for months to keep closed, in hopes of avoiding an electoral nightmare that would result from a hyperpoliticized attempt to reverse the 2016 election.

It’s not as if Pelosi can ignore it, either. House rules require a response to a privileged motion, which Green knows full well:

Green’s move will force House Democrats to deal with the issue in the near term because of the privileged nature of the resolution. Under House rules, Democratic leadership can decide to try to table the impeachment articles, effectively killing them for now and risk criticism from the party’s liberal base; refer them to the House Judiciary Committee for possible consideration; or allow the vote to proceed.

If leaders do nothing, Green can force a vote on the impeachment articles in two legislative days.

None of the options look very good from Pelosi’s perspective. Moderates are already balking at Green’s move, while even some progressives question the timing. Every single option in front of Pelosi now will split her caucus, and with it any hopes of ending a power struggle within it:

The matter is likely to divide the caucus, which has grappled for months with the question of what to do about Trump. Even impeachment proponents seemed divided about whether it is wise to force the issue now. House Homeland Security Chairman Bennie Thompson (D-Miss.) said he would support an immediate move to impeach the president, even voting against Democratic leaders should they try to refer the matter to committee to sideline the debate. …

Certain to be wary are moderates and lawmakers from districts that Trump won in 2016 who have long feared blowback for such a vote. Rep. Stephanie Murphy (Fla.), who leads the conservative Blue Dog Democrats, said, “I don’t think that we have completed the process or the investigations that we need to, to take that step at this time.” Rep. Jeff Van Drew (D-N.J.), a freshman from a swing district, said he would vote against the resolution.

No kidding. If the House Democratic caucus can’t even agree on impeachment, then what’s the point? It’s not as if the Senate, with its Republican majority, is champing at the bit to hold a trial for removal. If impeachment comes up for a floor vote and fails, not only will that infuriate voters in districts that Democrats just won by promising to be a governing party, it will infuriate progressive activists and pour gasoline on an already-raging civil war for control of the party.

Pelosi must have hoped that last night’s rebuke of Trump by House resolution would suffice and keep impeachment fever tamped down for a little longer. Instead, her own missteps might have made matters worse. As Allahpundit wrote last night, Pelosi tripped up over the House rules and ended up with egg on her face when the parliamentarian ruled her out of order and momentarily suspended her speaking privileges. She then asked two members of the Congressional Black Caucus to serve in the chair to announce that the House couldn’t accuse Trump of racism, a move that spectacularly backfired when both refused. Pelosi managed to bull her way forward through brute majority votes to ignore the rules, but she made herself look foolish and incompetent along the way.

So what’s next? Any vote to move impeachment forward will likely be the death knell of House Democrats in Trump-friendly districts. Any move to stop it will split off progressive activists and lose Democrats much of their political energy and fundraising. A referral to Jerrold Nadler’s House Judiciary Committee would get it off the front pages for about a New York minute, as Nadler would grandstand endlessly on it.

The least-worst option from this smorgasbord of disaster for Pelosi might be to force an up-or-down vote on impeachment now. Rip the Band-Aid off quickly, let the bill die, and hope that there’s enough time ahead of the election to have this fade into distant memory. Trump would claim vindication from it, but that’s got a shelf life too. The closer this drags on to the election, the worse it gets for Pelosi.

Update: I wonder if that’s what Pelosi has in mind:

Rep. Al Green says the US House will vote between 4:30-5 p.m. ET today on his articles of impeachment for President Trump; it remains unclear if Democratic leadership will move to vote to table the resolution, vote to send to cmte. or vote to proceed with the resolution.

As noted above, they have to do something within two days, so all of the options are available.

Update: Politics makes strange bedfellows. According to Politico, House Republicans might side with Green — on the procedural motions, anyway:

House leaders are likely to sideline Green’s measure with their own procedural vote: either moving to table his articles and delay them or to bottle them up in the Judiciary Committee. Green has said he’ll oppose either move, but a majority of Democrats are expected to side with leadership.

Republicans are likely to join Democrats in moving to derail the measure, but Democrats are warily watching to see if Republicans consider any procedural trickery and join Green in opposing a delay and forcing the House to take an up-or-down vote on the articles of impeachment.

The shorter version of this is: Will Republicans pounce? And it’s not at all clear that sending the bill to Judiciary would “bottle up” anything. Nadler’s been agitating for impeachment too, although he’s been loyal to Pelosi in public. But this has all the earmarks of a very fun afternoon, so stay tuned.

Meanwhile, Pelosi’s about as excited at this prospect as you’d imagine.

Pelosi to reporters on whether she supports Green resolution: “No. Does that come as a surprise to you?” per @morgan_rimmer 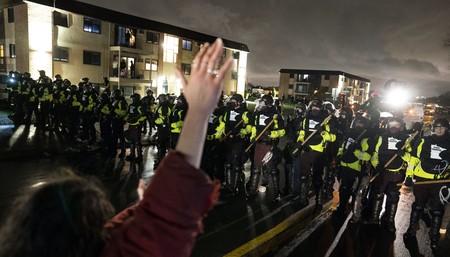 Biden on blood clot debacle: Look, y'all, there's enough vaccine for every American even without J&J
Allahpundit Apr 13, 2021 8:01 PM ET

Biden, Fauci, the Obamas to appear with celebrities in NBC "Roll Up Your Sleeves" vaccination special
Allahpundit Apr 13, 2021 7:01 PM ET

The MLB's Unforced Error Could Be Georgia's Walk Off Homerun
Townhall
'Ethnic studies' teacher training session warns them to be extra careful 'now that we're in people's homes' and parents might see it
Twitchy
Gaetz Turns it Around on CNN Journo After Network Exec Says Their Coverage of Him is "Propaganda"
Redstate
The Morning Briefing: Project Veritas Confirms CNN Is a Cesspool of Biased Lies
PJ Media