Manafort pardon coming? Mueller may have made sure it won't work

Will Donald Trump pardon Paul Manafort to confound special counsel Robert Mueller and his attempt to use the former campaign manager as a material witness? That already seemed less than likely, but Politico’s Josh Gerstein discovered that Mueller played eight-dimensional chess in the plea agreement with Manafort. If Manafort seeks a clemency action — or even if he gets one without asking — Mueller will come after Manafort’s remaining assets and use his confessions to get more convictions:

The 17-page deal doesn’t explicitly prohibit Manafort from seeking a pardon, but some lawyers said it appears to extract a promise from Manafort not to seek another form of executive clemency that could relieve him of the obligation to turn over tens of millions of property to the government as part of the plea bargain. The agreement also says prosecutors can come after the five identified homes or apartments, three bank accounts and a life insurance policy now or at any point in the future “without regard to the status of his criminal conviction.”

Another part of the deal says that if Manafort’s guilty pleas or convictions are wiped out for any reason, prosecutors immediately have the right to charge him with any other crimes he may have committed previously or confessed to during recent plea negotiations.

So Mueller heard all the pardon chatter too, to no one’s great surprise. The one big hole in the pardon strategy is that Trump can only forgive federal crimes. Some of what Mueller alleged against Manafort crosses over into state-level crimes too, which may or may not be prosecutable in the case of a pardon. (In New York, it’s not, although the state attorney general wants to change that.) A commutation and a later pardon worked for Scooter Libby because Libby’s only crime was lying to federal investigators; Manafort’s crimes were far more extensive, and involved millions of dollars in assets and cash which have accountability at multiple jurisdictional levels.

Manafort must have realized the futility of a pardon well before deciding to cut a plea deal with Mueller. His cooperation with special counsel ends Trump’s expressed admiration for him in standing up to Mueller, one would have to surmise, so it’s almost certainly a dead issue anyway. But did Mueller act properly in proscribing the use of a legitimate power of the presidency? Gerstein’s sources are skeptical:

The inclusion of a section barring Manafort from filing any “petition of remission” troubled some advocates because it appears to prohibit not just a request to the Justice Department but also directing such a request to the president. …

“What is most concerning to me is that Mr. Mueller, who is a part of the executive branch and is supposed to follow all of DOJ’s policies and procedures, is specifically seeking to impede the ability of the president to exercise his constitutional pardon authority,” said David Rivkin, a Justice Department official under Presidents Ronald Reagan and George W. Bush.

“It does appear this document was created with clemency in mind,” said [University of St. Thomas law professor Mark] Osler. “If this plays out … and later we get a pardon of some kind, we’re going to have a lot of questions of first impression, I think. Then, we’re going to be in the courts on this and it’ll be fascinating.”

Still, Gerstein notes in his meticulous research, the DOJ’s own regulations seems to allow for such clauses in its deals. Gerstein quotes 9-113.400 governing forfeiture settlements, which states, “It is proper to include in a settlement agreement a provision that expressly leaves open or expressly forecloses the right of any party to file a petition for remission or mitigation.” The previous paragraph, however, treats the pardon process separately from “remission or mitigation,” which might provide a hook for Manafort’s legal team if Mueller tried to execute this part of the agreement after a presidential clemency action. They could raise the objections initially aired by Judge T.S. Ellis about prosecutorial overreach and abuse, and about the infringement on presidential authority by a subordinate official.

That would seem like a long shot, though, for not much reward. Ellis eventually retreated from his own objection, and Manafort made the agreement under its present terms — with considerable duress, of course, but that’s true of every defendant considering a plea deal. If his defense team objected to those terms, they could have declined it. And if Trump objects to the limits on his presidential authority in this deal, he can fire Mueller, pardon Manafort, and direct Rod Rosenstein to forgo any further prosecution. Of course, Congress can also impeach Trump if they see that as obstruction of justice, which … is why the pardon won’t be forthcoming, at least as long as Mueller’s still working at the DOJ.

In chaos there is profit: Old oil tankers aren't headed to scrap any more
Beege Welborn 6:01 PM on December 05, 2022

Semafor: DeSantis refusal to do The View is a national crisis, or something
Ed Morrissey 5:01 PM on December 05, 2022 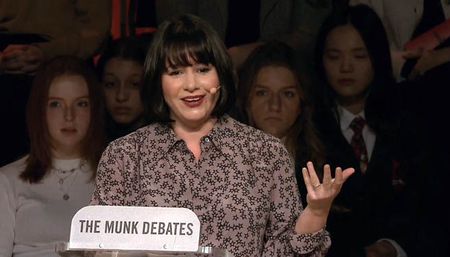