Until recently, California’s Central Valley was one of the nation’s most productive agricultural regions.  Not only did it feed itself, the state of California, and the entire country, it also produced exports to other nations.  That kind of enterprise employed a lot of people in Central California, from farm hands to wholesalers, and created a high standard of living.

That continued right up to the moment that the federal government got more concerned over the Delta smelt, a small, inedible fish, than feeding people.  A court order cut off water deliveries for seven months out of the year to the Central Valley at the same time a drought hit, and the combination turned a once-fertile breadbasket to the world into a Dust Bowl — or as Investors Business Daily suggests, a government-initiated agricultural disaster on the same order as Zimbabwe today or Ukraine in the 1930s.   Monica Showalter reports that the region that once fed the world now faces widespread hunger as a result:

Local newspapers and Fresno County officials are trying to rally Facebook users to vote for Fresno in a corporate contest sponsored by Wal-Mart for $1 million in charity food donations for the hungry. Fresno, a city of 505,000, has taken the national lead because 24.1% of Fresno’s families are going hungry.

Civic spirit is good, but something big is wrong here. Fresno is the agricultural capital of America. More food per acre in more variety can be grown in the fertile Central Valley surrounding this community than on any other land in America — perhaps in the world.

Yet far from being a paradise, Fresno is starting to resemble Zimbabwe or 1930s Ukraine, a victim of a famine machine that is entirely man-made, not by red communists this time, but by greens.

State and federal officials, driven by the agenda of environmental extremists, have made it extremely difficult for the valley’s farms, introducing costly environmental regulations and cutting off critical water supplies to save the Delta smelt, a bait fish. It’s all driving the economy to collapse.

In the southwest part of the Central Valley, water allotments as low as 10% of normal have created a visible dust bowl. The knock-on effect can be seen in cities like Fresno, where November’s unemployment among the packers, cannery workers and professional fields that make agriculture productive stands at 16.9%.

It isn’t just Fresno, although it appears to have taken the worst of the crisis.  Besides Fresno, four other Central Valley cities got listed in the bottom ten of MarketWatch’s 2010 survey on the worst places to do business in the US.  Fresno came in dead last at 102 on the list.

The collapse has another element to it for Californians as well.  The state has a huge budget shortfall, currently estimated around $26 billion, and cannot afford to expand safety-net programs to help the Central Valley.  One reason the budget hole is so large is because of the lack of revenue from normally-robust agricultural production in that region.  Instead of being a net revenue producer, the Central Valley threatens to become a sinkhole of welfare spending that will hasten the bankruptcy of the nation’s largest state, and an economy that would normally rank among the top 10 in the world if considered as a nation unto itself.

This is entirely the result of federal government intervention in agriculture, which might be understandable if it was intended to help agriculture.  Instead, it comes as a hostile act to both the people of the region and Americans as a whole.  Thanks to the collapse of the Central Valley, food prices will increase as we have to import more from countries with much less strict environmental controls, which is merely an inconvenience.  The starvation that has begun is more than an inconvenience — it is a national embarrassment, and a moral outrage.

The slaughter of women and children in Afghanistan is ramping up
Jazz Shaw Jul 26, 2021 7:56 AM ET 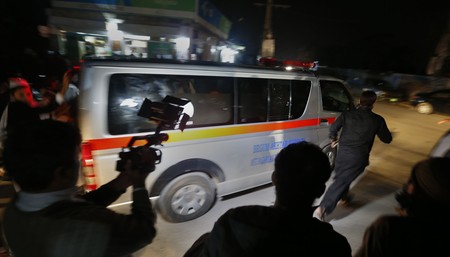 Should Amazon drivers be able to unlock apartment building doors?

It’s Fun Watching The Press Humiliate Itself
Townhall
'My butt's been wiped'?: People are trying to figure out what Joe Biden said to reporters upon returning to the White House on Sunday
Twitchy
Did Joe Biden Say "My Butt's Been Wiped" in Response to an Immigration Question?
Redstate
Why Greeks Hate Jews, or Talmud and Tragedy
PJ Media