Obama: We need to save the same jobs again with $50B more in state bailouts

The state and local grants in Porkulus acted as a federal bailout package for state bureaucrats, who otherwise may have lost their jobs as state and local governments cut spending in order to balance budgets.  The White House sold this as rescues of teachers and first responders, but as a series of local newspapers reported, those jobs were never in jeopardy.  The money that got added to those budget items got transferred elsewhere to save less politically sensitive bureaucrats elsewhere, while the Obama administration claimed to have saved millions of jobs through these bailout transfers.

Of course, that only works for a single budget year, and the same structural cost issues that existed over the last year continue today, thanks to the federal bailout.  What’s the Obama administration answer for that?  Another bailout:

President Obama urged reluctant lawmakers Saturday to quickly approve nearly $50 billion in emergency aid to state and local governments, saying the money is needed to avoid “massive layoffs of teachers, police and firefighters” and to support the still-fragile economic recovery.

In a letter to congressional leaders, Obama defended last year’s huge economic stimulus package, saying it helped break the economy’s free fall, but argued that more spending is urgent and unavoidable. “We must take these emergency measures,” he wrote in an appeal aimed primarily at members of his own party. …

With the letter, however, Obama makes a direct and unequivocal case for additional “targeted investments,” including state aid and several less-expensive initiatives aimed at assisting small businesses. He specifically calls for passage of the measure that is before the Senate, which would extend unemployment benefits and offer states additional aid, increasing deficits by nearly $80 billion over the next decade.

Obama asks lawmakers to be patient on the deficit, noting that a special commission is at work on a comprehensive deficit-reduction plan.

That’s a laugh.  Obama wants people to believe he’s serious about deficit reform, and so he’s proposing making the deficit worse until someone forces him to stop spending.  It’s the action of an addict.  I can stop spending any time I want.  I just don’t want to do it right now.

Besides, the jobs targeted by these bloc-grant bailouts are the exact same ones claimed by the White House last year.  When do people in Minnesota get to stop bailing out California bureaucrats?  Shouldn’t the states themselves start working on making rational judgments about the size and sustainability of their own governments?  If it takes Minnesota money to float California, and Texas money to float Minnesota, then there is no accountability to the citizens of a state at all. It’s a shell game and nothing more.

And this is all money just going down a rathole anyway.  The bailout last year didn’t solve the problem, but it did add over a hundred billion dollars to the national debt.  Obama now proposes to send $50 billion more in imaginary money after bad imaginary money to, once again, avoid tough economic choices by kicking the can down the road at the expense of future generations.  It’s becoming the theme of his presidency, which is profligate irresponsibility combined with an utter lack of strategic comprehensive growth policies.

John Hinderaker agrees, and points out the only real beneficiary of this bailout:

The original “stimulus” bill was all about keeping state and local government spending, and the salaries it supports, sky-high. It doesn’t appear that President Obama has a game plan to help the economy, other than continuing to feed the already-bloated public sector. This is consistent with his apparently complete ignorance of basic principles of economics. Democrats in Congress, however, can see the writing on the wall. It will be interesting to see whether they are willing to brave voter wrath by stimulating the public sector still further.

This is a $50 billion bailout to Big Labor — the SEIU, AFSCME, and the NEA.

Pfizer: Our vaccine neutralizes Omicron after three doses but is shakier after two
Allahpundit Dec 08, 2021 11:31 AM ET 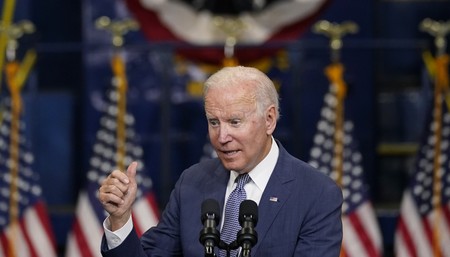