Harvard med students learn how to care for LGBTQIA+ infants

Science™ tells us that infants (medical definition: baby up to 1 year old) can have “Diverse Sexual Orientations, Gender Identities, and Sex Development.”

How do I know this? Harvard Medical School teaches its students how to care for such infants in a culturally appropriate manner.

Good to know. Most people think that infants are learning what it means to have a body, and aren’t aware that sexuality is even a thing. But our practitioners of medicine know better and are thankfully aware that babies are highly sexual beings with strong physical sexual attractions to people of various types, or could even be longing to cut off their own pee-pee or breasts.

It’s a complex topic. But if you think about it there are obvious tells that the heteronormative cisgender patriarchy has been diverting our attention from.

For instance, have you noticed that infants assigned the gender “female” at birth are strongly attracted to women’s breasts? If you think about it that means they are lesbian or at least bisexual. And infants assigned “male” often play with their own pee-pees, and if offered the opportunity notice their sperm-donor parent has one too. They may even touch it if the opportunity arises.

They, too, are very interested in and often fondle breast, implying their own bisexuality.

Babies even resist wearing clothes, another example of latent Queer identity. Add it all up and there clearly has been a conspiracy to obscure the fact that all infants are gender nonconforming. Those bastard biologists have been holding out on us, probably because they want breasted individuals to cook, clean, and make sandwiches instead of enjoy the full life experience of pushing paper in a cubicle.

Harvard Medical School students can learn about how to provide healthcare to “infants” who are LGBTQIA+, according to a course catalog description.

“Caring for Patients with Diverse Sexual Orientations, Gender Identities, and Sex Development,” a regularly available med school course, promises to give students a chance to work with “patients [who] identify as lesbian, gay, bisexual, transgender, queer, intersex or asexual.”

“Clinical exposure and education will focus on serving gender and sexual minority people across the lifespan, from infants to older adults,” according to the course description.

Students in the course may also “engage in a mentored scholarly endeavor” such as “advocacy, quality improvement, medical education, original research, or public health project.”

It’s good to know that Harvard will not only help doctors become sensitive to the special needs of “gender and sexual minority” infants, but that they will help them engage in advocacy along with a mentor. Just what the doctor ordered! 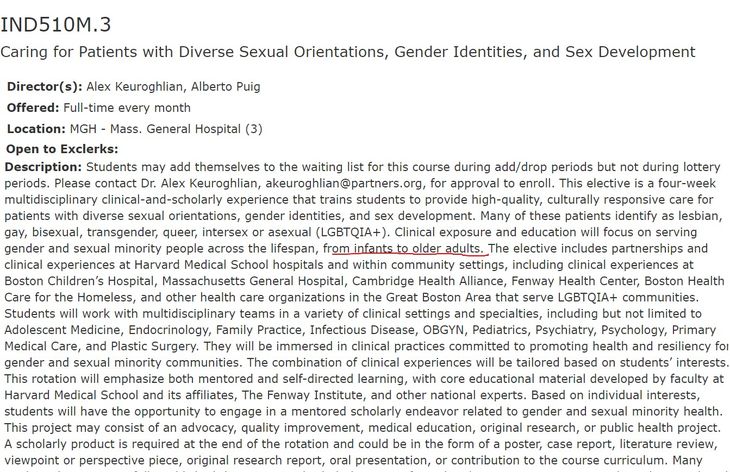 Included with this training will of course be gender reassignment treatments, since Massachusetts General has a clinic that focuses on transgender treatments.

Now obviously there are people with diverse sexual orientations, and people with gender dysphoria, so medical training in these areas of practice is necessary. The last thing anybody needs is a refusal to deal with patients as they come to get care. Patients need doctors who can work with their particular needs to keep them healthy or treat their illnesses.

But if they are focusing on the sexual identities of infants they aren’t doing medicine, they are cult members grooming young children into their ideology and sexual practices.

Unfortunately, woke ideology has captured the commanding heights of our culture. The sciences themselves have become so perverted that we not only can’t trust their conclusions–we can’t even trust their basic motives.

There was a time when I would just assume that a Harvard trained physician would be above average. Now, I am pretty sure that isn’t the case. They may be smart, but their training is suspect.

It’s a good thing we are importing our doctors from India. Their training is less likely to be corrupt, I suspect.

You know what else we may be running short of? Pharmacists
Beege Welborn 2:31 PM on January 30, 2023