Neither Adam Kinzinger nor Liz Cheney interests me that much.

They seem to be driven by a monomania: hatred of Donald Trump. It takes about 2 minutes to get their point, and there is nothing left to consider. So I don’t.

Unlike many folks on my side of the aisle, I can sympathize a tiny bit. The Republican Party used to prize dignity as one of the cardinal virtues for public figures. Ronald Reagan famously always wore ties in the Oval Office, out of respect for the presidency’s responsibility.

So it is understandable why a lot of Republicans felt a visceral disdain for Trump, whose brand of leadership was aggressive showmanship. “Dignity” and “Trump” rarely find themselves in the same sentence. Many of Trump’s biggest fans sincerely wish the man would just shut up sometimes. It really is unnecessary to verbalize every passing thought, however amusing it might be.

But dislike of a person or the characteristic of that person doesn’t have to break your ability to make rational judgments, but it sure can. Both Kinzinger and Cheney have had their minds and souls warped by a burning hatred for Donald Trump; these formerly conservative Republicans have never met a Leftist they wouldn’t embrace and elevate as long as it would annoy a Trump fan.

Kinzinger caught my interest this morning because of…of course…a tweet. It is ironic that the communications tool that brought Trump to the masses and enabled his own worst characteristics has done a similar thing for Kinzinger, who is a Twitter incontinent. As with Trump–even more so, actually–he simply cannot regulate his desire to express every passing thought and share it with the world.

Yes, Kinzinger is worse on Twitter than Trump ever was.

He has revealed himself to be shallow, mean, and of worse character than his nemesis. As far as I know Trump has never threatened anyone on Twitter. Nor, contra Kinzinger, has he actually celebrated violence. I have read Trump’s supposedly violence-inspiring Tweets and they are as anodyne as you can find on Twitter. Nothing there. I wrote about this yesterday, in fact.

But Kinzinger? He is actually a very nasty character on Twitter:

So you're a sitting Congressman threatening a private citizen?!
Disgusting.

There is an entire genre of faux-courageous politicians threatening to punch the lights out of people they dislike. Nancy Pelosi, an actual octogenarian, threatened to punch Donald Trump. But obviously this was metaphorical, not a serious threat in any way. Politics ain’t beanbag, they say. The rhetoric runs high, the stakes are huge, and the metaphors are all martial. War, in fact, is just politics by other means. 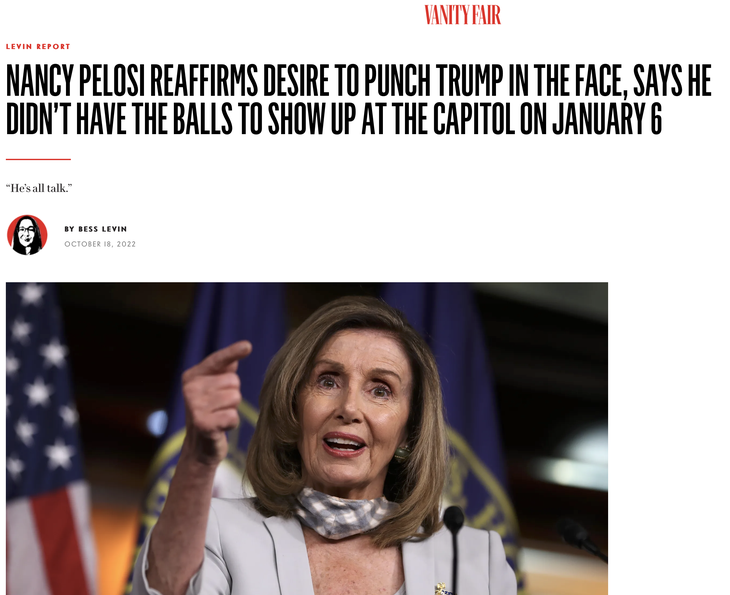 But a young, fit, military veteran threatening somebody for posting a meme he doesn’t like? While unlikely to be a genuine threat of violence, it certainly is threat-adjacent. And quite revealing of Kinzinger’s character. He is a nasty piece of work.

This from a man who used his hyper-sensitive hermeneutic capabilities to tease out a call to insurrection from Trump’s rather blasé tweets on January 6th, asserting that they threatened the nation itself.

Kinzinger blew up over a meme. A silly cartoon expressing an opinion Kinzinger doesn’t like. Rather than scrolling past he just had to make a threat. Who does that? A congressman?

Just 3 hours prior to posting his rather juvenile threats, the sitting congressman called for toning down the rhetoric. It was touching, in a way, given how rhetorically hot he runs. And as sincere as a ponzi schemer’s promises.

You simple must watch this video. He actually calls for all of us to come together and drop the partisan mudslinging. This, 3 hours before he rants about beating up some anonymous cartoonist.

As Thanksgiving approaches, there maybe some tension…But let’s put that behind us, and come together! @COUNTRY_F1RST pic.twitter.com/ZXYVM0w6I6

As a certified new member of the Left, Kinzinger has embraced the idea that any disagreement with he and his allies is proof positive that you are unworthy of existence. Perhaps literally, as he regularly calls people he dislikes “evil.” He is all for peaceful coexistence, once you and I are gone. Until then, this is war.

I really wish i could say even worse to you.

You wouldn’t know honor, sacrifice, or especially COMMITTMENT if it crossfitted with you. https://t.co/RzG21ut6JB

The Adam Kinzingers of the world, by becoming monomaniacal, have surrendered all reason. Whatever justification they have for believing Trump to be uniquely awful–I don’t share their opinion, but I understand it–they have themselves become uniquely awful. They have, as it were, embraced the Dark Side. In fighting what they believe to have been evil they embraced evil means. They lie, they emote, they propagandize. And they threaten.

We are constantly told that criticizing people we disagree with inspires violence–by people like Kinzinger who actually threatens violence and calls people with opinions different from his “literally evil” while wishing he could find stronger language. If Donald Trump had called Kinzinger “literally evil” you can rest assured that Kinzinger would claim to feel threatened. None of those rules apply to Kinzinger or the Left.

Nietzsche once said “Battle not with monsters, lest ye become a monster, and if you gaze into the abyss, the abyss gazes also into you.”

Kinzinger believes he is battling monsters, real or imagined.

He clearly has become one himself.

The Case Against Everyone Else 2024 – Part 2
Townhall
Is this GMA promo for Sam Bankman-Fried interview the start of a 'rehab tour,' or no?
Twitchy
Doocy and Melugin Tag Team to Take Down WH's Blatant Biden Border Lie
Redstate
Police Release Confusing Information About University of Idaho Murders
PJ Media