That’s what National Education Association Secretary-Treasurer Becky Pringle called the situation in which the union finds itself this year. It won’t come as a surprise to readers of this blog that NEA has a $14 million budget shortfall, or that it has lost more than 39,000 active members. Pringle stated that the deficit is closer to $17 million due to increased costs to the union’s legal services program, which subsidizes each state affiliate’s attorney referral program and other litigation-based actions for individual members.

Plus, Pringle said, “We have to assume we haven’t hit bottom yet.”

What might surprise you, given NEA’s aversion to staff reductions in the public schools (to the point where California just passed a law under cover of darkness to save teachers’ jobs even without the money to pay them – a move pioneered in Detroit and Los Angeles), is that the union plans to partially cut the deficit with $4.8 million in staff reductions.

Asked how many staffers would be lost, Pringle replied, “about 20.” If anyone in the audience did the math, that’s $240,000 saved per staffer, which tells you all you need to know.

Who knew Ms. Pringle could be such a fiscal hawk? She described to the delegates present how difficult it was to make budget cuts, since each program had a constituency arguing to protect it. She declared, “I will not support an increase in dues” to close the budget gap because “our members are hurting.” And she detailed the budget committee’s work on staff costs, saying, “We’ve worked to reduce benefits.”

Indeed, Pringle’s words are coming out of the mouths of school board presidents across the country.

There were also indications that while there may be red states and blue states, the only color that matters is green.

Pringle defended NEA’s business relationship with Bank of America, saying the union has been able to exert influence over the bank in the area of credit card rate hikes for members, and saving the union money on electronic fund transfers for dues.

Then there is this ad for Target, on the back of the NEA Representative Assembly program book: 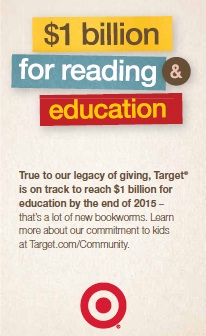 It’s reasonable to argue that these corporate relationships don’t affect the union’s mission – except that’s a difficult argument to make in light of what NEA director Dawn Shephard Pope said in response to a question about why the union contributes so much money each year to advocacy groups.

She said those grants are made “in order to advance our mission.”

If it’s a good enough reason for NEA, why wouldn’t it be good enough for Western Union, Bank of America, Target and AT&T?

Keep an eye on the Green Room for more of his dispatches from the NEA convention.