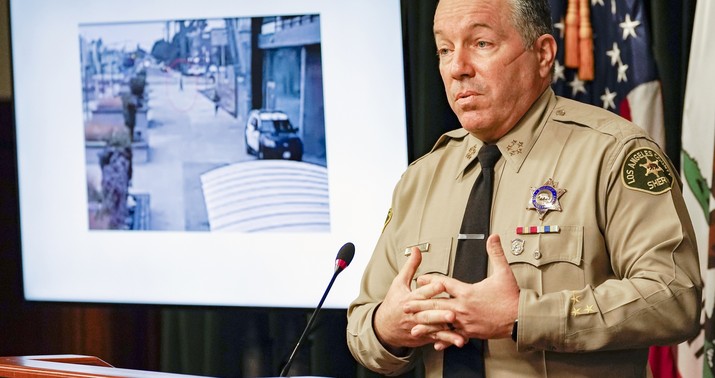 Immediately after progressive DA George Gascon was sworn in he put in place a series of new rules including one that prevented prosecutors from attending parole hearings. That decision is one of several that have generated controversy.

Now LA County Sheriff Alex Villanueva has informed Gascon that in the absence of prosecutors at these hearings, he will be sending his own investigators to stand up for victims and their families:

“At the request of family members, the LASD will do everything possible to give victims a voice at the table to address their concerns,” the letter continued.

Shortly after being sworn into office in December, Gascón issued a directive on so-called “lifer parole hearings” that indicated that the office’s “default policy is that we will not attend parole hearings and will support in writing the grant of parole for a person who has already served their mandatory minimum period of incarceration, defined as their MEPD (Minimum Eligible Parole Date), YEPD (Youth Parole Eligible Date) or EPD (Elderly Parole Date).”

Sheriff Villanueva’s full letter to DA is here. It’s very polite and promises to work with Gascon on other reforms, but it’s also clearly a a rejection of his approach to parole hearings. He’s not asking for a dialogue, he’s informing the DA that this is going to happen whether he likes it or not.

Gascon’s rule on parole hearings has already led to a great deal of controversy in his short tenure. Last month there was outrage when Gascon’s new rule prevented prosecutors from attending the parole hearing for a serial child rapist named Ruben Beltran. Beltran’s victims, a brother and sister who were around age 6 when the rapes happened, described Beltran as a “monster.” Their mother said she can’t understand why the DA’s office is leaving her and her children to fight Beltran’s parole on their own: “We’re just a family, now we have to take on the role of law enforcement and take on the burden of trying to defend the community rather than the people who should be defending the community.”

Earlier this week, Ed wrote about Kay Martley whose cousin was killed by a member of the Manson family cult named Bruce Davis:

“I had no one to speak for me,” said Martley, 81, whose cousin Gary Hinman was tortured and killed by Manson followers on July 27, 1969. “I felt like no one cares about the victim’s families anymore. We are totally forgotten.”

And just yesterday there was a story about the upcoming parole hearings of one of the worst rapists in LA County history, a man known as the “subterranean rapist.”

The convicted rapist, born James Edward Hughes, had been denied parole twice but has another hearing coming up in April and prosecutors won’t be allowed to attend due to Los Angles County DA George Gascón’s policy change.

FOX 11 spoke with one of the victims, who was 19 when Hughes stabbed and sexually assaulted her inside a garage. The victim — who we’ll call “Jane” to protect her identity — is outraged and feels abandoned by the DA’s office…

“He repeatedly told me he was going to kill me,” she added. “I was stabbed during the attack as well… it was beyond terrifying.”…

“To be completely abandoned… he hasn’t even served half of his sentence, which for the life of me I can’t even understand,” the victim said. “To be abandoned at this juncture and thrown into a completely vulnerable situation… this has been a huge setback for me.”

A special advisor to Gascon released a statement in response to the story:

The role of a prosecutor, and their access to information ends at sentencing. The Parole Board, however, has all the pertinent facts and evaluations at their disposal. The Parole Board’s sole purpose is to objectively determine whether someone is suitable for release. Both times before, this particular individual has been denied parole. Once again, there is no indication that this person will be released, as the parole board denies release in over 85% of cases.

This is complete BS but not surprising coming from one of Gascon’s woke toadies. A jail sentence is about the convict paying a price for the crime they have been found guilty of committing at a point in time. People’s memories may fade and the people on the parole board may not have any knowledge at all of the crimes or the terror they inspired. The victims remember and so do the prosecutors involved in the cases. Even if the the prosecutor attending the hearing wasn’t part of the original case, it makes sense to have someone at the hearing who can speak to the reason the sentence was imposed at the time and act as a voice for victims.

That doesn’t mean no one should ever be paroled or that the parole board has to abide by the statements of prosecutors at these hearings. Perhaps the parole board does have new information that is significant. That’s their job. But that’s not going to be the case for genuine monsters like the serial child rapists mentioned above, the “subterranean rapist” or members of the Manson family cult. So it makes no sense to have a blanket rule preventing prosecutors from attending these hearings. Ensuring these monsters remain in jail is a good use of their time and it remains astounding and deeply worrisome that DA Gascon would oppose those efforts.

Until some sanity returns to the DA’s office it’s good to see Sheriff Villanueva stepping up for victims.