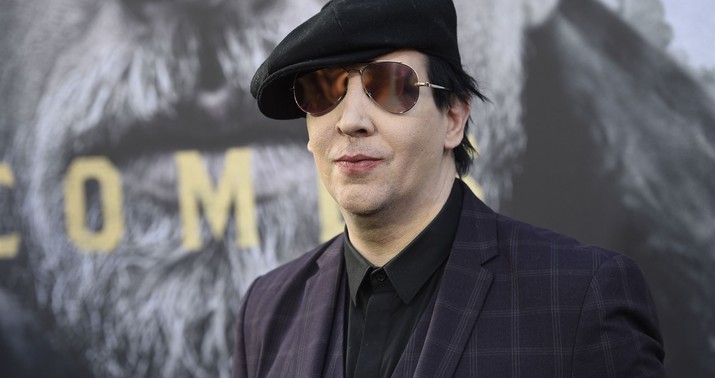 Yesterday I wrote about the allegations of abuse made against Brian Warner aka Marilyn Manson by actress Evan Rachel Wood and four other women. Later in the afternoon, Warner did put out a statement claiming all of his personal relationships had been consensual.

Around the same time yesterday afternoon his record distributor announced it was dropping him and won’t be working with him in the future.

Feminist Jill Filopovic wrote a piece today about the allegations against Warner. She brings up a point that I made yesterday, i.e. it was pretty obvious all along that Brian Warner had problems dealing with women. Unlike some other well-known names of the #MeToo era, he didn’t hide it.

For more than a decade, he has been upfront about his misogyny and abusive behavior. In a 2009 interview with Spin magazine, conducted shortly after his breakup with Wood, Manson said he called Wood 158 times while self-mutilating and then blamed her for it. “I wanted to show her the pain she put me through,” Manson said. “It was like, ‘I want you to physically see what you’ve done.'”…

Many of the men felled by the #MeToo movement were highly effective at hiding their true colors. They supported progressive and feminist causes. They said all the right things about women in the workplace. They were outwardly respectable, stand-up guys who used that facade to conceal their bad acts.

Not Manson. He was outwardly misogynistic. He spoke openly about at least some of the ways he may have abused, threatened and harassed Wood.

As far as this goes I agree with Filipovic but I think she’s missing the bigger picture. It’s true that Harvey Weinstein made a show of his progressive bona fides. Remember that after the first story came out about him he offered the public a kind of deal in a statement. He would focus all his attention on destroying the NRA if people would give him a pass on the abuse of women. So long as he was on the right side of the culture war, he seemed to think he could do whatever he wanted.

The same could be said about Bill Clinton who not long ago argued that his history of promoting women in public should shield him from accusations about his behavior toward women in private. A writer for the Daily Beast summed up the gist of Clinton’s argument: “How could he, Bill Clinton, have been bad to Monica Lewinsky if he, Bill Clinton, had been so good for women elsewhere?”

By contrast, Brian Warner was pretty open about his own misbehavior and misogyny. He talked about it in interviews. He didn’t pretend to be a male feminist. That’s all true but the more important point is that starting in the mid-90s he made a career out of making himself into a conservative boogeyman. His first album, “Portrait of an American Family,” came out in 1994 just a year after the film Addams Family Values was in theaters. It was the early days of the culture war and conservatives were talking about family values and progressives were trying to counter those messages. In some cases the push back was subtle and meant for a wide audience and in some cases it was Marilyn Manson.

And that’s where I think Filipovic isn’t taking this quite far enough. Brian Warner was on the same side of the culture war as Bill Clinton. They both got passes from the same people for the same reasons. So long as they were scoring points for the home team in the culture war, their industries and the broader media were willing to give their personal lives a pass. That’s literally what happened with Bill Clinton. It’s how you wound up with Gloria Steinem defending him and then only regretting it decades later when the Clintons could be of no further use to the cause. The same cultural protection was in place for a lot of other cultural icons on the left and still is.

So if you want to know why these men got away with bad behavior for so many years, the answer is because they were all despised by the right. In Hollywood and in Washington DC, that was often enough reason to give them a pass on merely personal foibles. Harvey Weinstein is finally in jail but Bill Clinton is still a beloved figure to many on the left. He certainly isn’t reviled the way he should be. Things have changed a little but not a lot.

This Is Not Normal and I Refuse to Pretend It Is