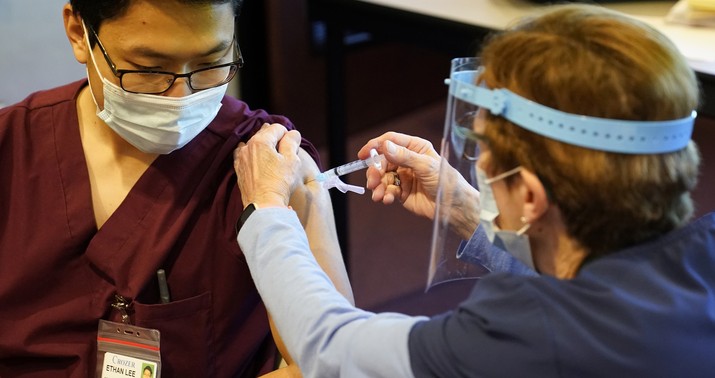 Earlier today I wrote about China’s attempts to badmouth U.S. vaccines in response to one of their own vaccines failing to perform as they had hoped. But Monday the NY Times’ David Leonhardt argued that, even setting China’s propaganda aside, we may be underselling just how effective these vaccines are.

He starts by recalling the advice that was given early last year about wearing masks. You probably remember there was a time nearly a year ago when the official guidance from the WHO and others, often repeated by the media, was that masks were unnecessary and didn’t help. There was a reason for that advice at the time. There was concern that panic buying of masks would lead to the same result we saw with toilet paper, i.e. not enough to go around. And that would have created a problem because people in the medical field needed those masks.

But that well-intention message backfired. People could tell they weren’t being told the whole truth and the eventual reversal of course by public health experts made it look like they didn’t know what they were talking about. That’s not a good way to build confidence that the same people can be trusted with your health. Now we may be doing the same thing again, only this time with regard to vaccines.

Right now, public discussion of the vaccines is full of warnings about their limitations: They’re not 100 percent effective. Even vaccinated people may be able to spread the virus. And people shouldn’t change their behavior once they get their shots.

These warnings have a basis in truth, just as it’s true that masks are imperfect. But the sum total of the warnings is misleading, as I heard from multiple doctors and epidemiologists last week.

Despite the various concerns about potential problems with the vaccines, including the worry that they won’t be effective on some new strain, the reality so far is that they are actually very impressive. Leonhardt argues even the 95% effectiveness rate understates how well they work:

The 95 percent number understates the effectiveness, because it counts anyone who came down with a mild case of Covid-19 as a failure. But turning Covid into a typical flu — as the vaccines evidently did for most of the remaining 5 percent — is actually a success. Of the 32,000 people who received the Moderna or Pfizer vaccine in a research trial, do you want to guess how many contracted a severe Covid case? One…

The risks for vaccinated people are still not zero, because almost nothing in the real world is zero risk. A tiny percentage of people may have allergic reactions. And I’ll be eager to see what the studies on post-vaccination spread eventually show. But the evidence so far suggests that the vaccines are akin to a cure.

It’s the nature of the news media to look for the next danger, the next point of threat or possible failure. But in this case, we may be being too skeptical of what looks like very good news. The vaccines can crush this pandemic if we can get them to millions of people quickly. Here’s hoping we follow Israel’s lead in getting this done so we can put it behind us.