VP Pence: Violence at the Capitol ‘Must Stop Now’ (one woman shot in the neck) (Update) 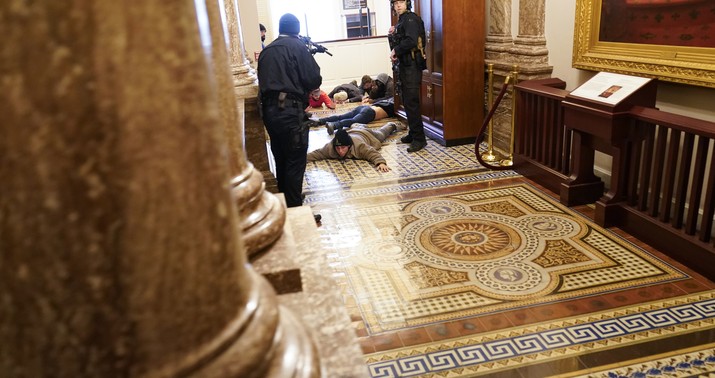 Allahpundit has been covering the mob that entered the U.S. Capitol in the last couple hours. Here’s a clip in case you missed it:

I like many people voted for President Trump in the 2020 election and hoped for a different result. But violence and destruction is not the way to express your grievances. This is disgraceful and has to end. pic.twitter.com/AKGqJ0d26p

I’ve probably written 100 articles about Antifa thugs in Portland and Seattle and elsewhere acting exactly like this. If you watch that clip closely it looks to me like someone literally spits in the eye of one of those officers. My reaction now is the same as it was over the past year: Arrest them all! Prosecute them so they learn the hard way this is unacceptable behavior.

A few minutes ago (as I write this) Vice President Pence issued some tweets taking this position.

Peaceful protest is the right of every American but this attack on our Capitol will not be tolerated and those involved will be prosecuted to the fullest extent of the law.

I hope he’s right because that’s what these people deserve. President Trump also issued a couple of tweets calling for peace but they didn’t go as far as Pence’s statement calling for prosecution:

Please support our Capitol Police and Law Enforcement. They are truly on the side of our Country. Stay peaceful!

I am asking for everyone at the U.S. Capitol to remain peaceful. No violence! Remember, WE are the Party of Law & Order – respect the Law and our great men and women in Blue. Thank you!

The fact that Trump isn’t calling for these goons to be locked up is inexplicable apart from the fact that these are his his people. For comparison purposes, here’s how Trump sounded last year when anarchist goons were attempting to tear down statues:

Numerous people arrested in D.C. for the disgraceful vandalism, in Lafayette Park, of the magnificent Statue of Andrew Jackson, in addition to the exterior defacing of St. John’s Church across the street. 10 years in prison under the Veteran’s Memorial Preservation Act. Beware!

And when Antifa was attacking the federal courthouse in Portland, he said nearly the same thing:

Anarchists, Agitators or Protestors who vandalize or damage our Federal Courthouse in Portland, or any Federal Buildings in any of our Cities or States, will be prosecuted under our recently re-enacted Statues & Monuments Act. MINIMUM TEN YEARS IN PRISON. Don’t do it! @DHSgov

I’m already seeing people argue that the invaders at the Capitol a) weren’t really Trump supporters or b) didn’t destroy anything. But at least one person was shot today during this chaos. Details are still vague but video shows a woman wearing a Trump flag as a cape who goes down after a gunshot. Be warned, this is graphic:

Here’s an eyewitness describing what he saw at that moment:

The woman made it out alive and is in critical condition at the hospital. Presumably the police fired the shot. I’m sure we’ll learn more eventually, but none of this would have happened if people weren’t storming into the Capitol and confronting police as a shouting mob.

As for the claims (again I’m seeing these online) that these folks were Antifa in disguise, let’s just arrest everyone involved and then we can find out who they are. For instance, this guy carrying Nancy Pelosi’s podium shouldn’t be too hard to find:

Via Getty, one the rioters steals a podium from the Capitol pic.twitter.com/V4spojl40q

What we shouldn’t do is allow this to go unpunished.

Update: The woman shot inside the capitol has died.

A woman who was shot inside the Capitol building after it was overrun by a pro-Trump mob has died, Washington, D.C., police officials said on Wednesday.

The woman has not been identified and no information has been released about who may have shot her.

The Washington Post says a police officer was firing at a man who refused to stop (note the typos are in the original):

A Capitol Police officer shouted from a higher stairway at the intruders, yelling at them to stop, but when they didn’t, and the officer fired at a man coming at him, law enforcement officials said. Amid shouts and people rushing to get away from the sound of gunfire, protesters saw a woman in their group collapse. She was an unarmed, a law enforcement official said, but the officer who shot her didn’t know that. Capitol Police had already been warned by DC Police that many protesters were secretly carrying weapons.

I wish it hadn’t happened but charging into the Capitol as part of a mob and ignoring police orders to stop is a very dangerous thing to do.